close
INTERVIEW: WE OFFER A FEW ALTERNATIVES TO THE USUAL PARADE OF SEQUELS, REMAKES AND IDIOTIC MAINSTREAM HORROR. CONSIDER IT A PUBLIC SERVICE. 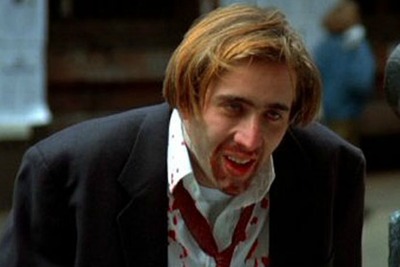 Remember when Nicolas Cage was cool? No? It's true! Once upon a time, long before he morphed into the lazy check-casher who takes roles in films like The Sorcerer's Apprentice, he was known for taking challenging, idiosyncratic roles in films by the Coen Brothers and David Lynch. And right in the middle of that period he starred in Vampire's Kiss, an honestly ahead-of-it's-time take on vampires that manages the rare (for the era) feat of examining the shallow emptiness of yuppie affluence humorously, rather than wallowing in maudlin sentiment. Think American Psycho, but without Christian Bale's amazing abs.

Describing Vampire's Kiss risks spoiling what's so interesting about it, but in brief: Cage's Peter Loew is a typical 80s yuppie D-bag who spends his days working as a NYC-based literary agent (seriously, does Hollywood ever feature characters with jobs people actually have? Customer service anyone?), and his nights partying in the New York City club scene. During one such night out he scores the one night stand of a lifetime with Ashley (played by Jennifer Beals), a party girl he's been scoping out for some time but with whom he hasn't been able to hook it up. Their encounter, which may or may not be entirely imagined, goes horribly sideways when she turns out to be a vampire and chooses him as her next meal.

The encounter isn't fatal - maybe Ashley wants to preserve the stock! - and Peter becomes convinced he's been turned into a vampire too. What follows is a ridiculous and awesome depiction of an increasingly unhinged man that becomes so strange it approaches self-parody, except for its unrelentingly black humor. Peter begins to purposefully adopt what he believes to be the mannerisms and dress of actual vampires. He can't grow fangs of his own, so he purchases some novelty shop costume teeth to make up the slack and uses them to make absurd attacks on unsuspecting 'victims'. He retreats into his apartment during the daytime, subsisting on, among other things, live roaches. He also begins to treat his secretary like a Thoroughly Modern Millie version of Renfield, punishing her with pointlessly complex busywork, then moving on to ritualized workplace abuse and finally, outright physical (and perhaps, sexual assault).

All the while, he relates his experiences to his therapist, through whom we see his deteriorating mental condition. It becomes clear that he not only imagines his vampiric state, but possibly the original encounter with Ashley and a great deal of the film's events. By the brutal end, Peter has entirely lost his mind. If the film were set in LA he'd be one of those pathetic crazies who dress in Super Hero costumes and take pictures with tourists, but in New York he just disappears into the homeless population until... well the ending isn't happy.

If you've never seen it, be warned it's going to be an acquired taste. Much like Joe Versus The Volcano and Jacob's Ladder, both of which came out the following year, Vampire's Kiss exists in that weird period, just before the revitalization of mainstream American movies kicked off by the Indie film movement in the mid 1990s; the Heaven's Gate fiasco still loomed large and director/writer driven films were not strongly supported. I can't help but feel that if it had only come out 3 years later, it would have made a lot more sense (not only in execution, but also larger pop culture context.) As it is, it's an uneven, weirdly paced movie that at times resembles an expensive TV production. Still, the script by Joseph Minion is hilarious and disturbing all at once, and Nicolas Cage is astonishing, completely unrestrained in his portrayal of an insane, sadistic pervert. Interestingly, it's a performance very similar to the excellent one he gave in Bad Lieutenant: Port Of Call New Orleans, and the two movies would probably make a great double feature.

Never a perfect film, Vampire's Kiss has aged surprisingly well, and for those of you not interested in examining Nicolas Cage in all his hammy glory, rest assured it has enough creepy sexuality, unredeemable violence and gross awkwardness to make you forget all about the National Treasure series. And best of all? About midway through, you'll see the perfect halloween costume.

Vampire's Kiss can be streamed on Netflix.