close
OPINION: OPINION: WE OFFER A FEW ALTERNATIVES TO THE USUAL PARADE OF SEQUELS, REMAKES AND IDIOTIC MAINSTREAM HORROR. CONSIDER IT A PUBLIC SERVICE.

5 Films You Need to Watch This Halloween - Part Two: 'Threads' 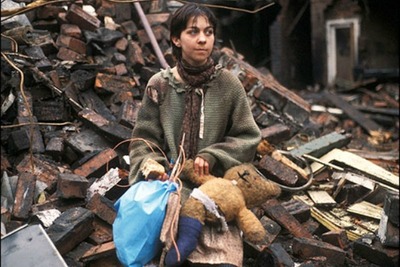 Sure, when you think of Halloween terror, you think of ghosts, vampires, zombies, serial killers and the like. That makes sense, being as they are ruthless killing machines bent on the destruction of humans. But as genuinely creepy as these things can be, nothing is scarier for my money than the possibility that the human race might destroy itself, and even after doing so, take many years for the survivors to finally realize that they're doomed. And nothing beats a fake, never gonna happen apocalypse - cough zombies cough - like one that actually could take place, which is why today's entry is about the atomic bomb.

By 1984, we were nearly halfway through the Reagan years and still a year and a half away from Glasnost. No one had any way of knowing that the decade would end with the fall of the Eastern Bloc and end to the Cold War, and Reagan's famously confrontational stance toward the secretly moribund Soviet Union had a profound effect on 80s pop culture, particularly the rise of speculative fiction regarding the actual problems related to a nuclear war. Obviously, the Mad Max films and their endless imitators come to mind, but the period is more notable in how many attempts to deal with the subject matter in a somewhat realistic manner arose. Instead of heroic sociopaths cutting a swatch across an irradiated landscape battling mutants and militias, we were treated to a slate of family dramas depicting the decline of normal society and the effect on average people.

America's most famous attempt at this genre is The Day After, a 1983 mini series that terrified me as a child but when I watched it as adult, seemed laughable. Maybe it's radiation sickness Steve Guttenberg, maybe it's just the fact that I expect more from a TV series with a big budget, or maybe it's just that I know how things eventually worked out, but I just couldn't take it seriously. Not so with BBC's response to The Day After, the genuinely frightening 1984 miniseries Threads.

Threads focuses on two Sheffield-based British families, the Kemps and the Becketts, as they slowly succumb to Britain's total destruction in the crossfire between a full blown nuclear was between the United States and the Soviet Union. It begins following the decision by Ruth Beckett and Jimmy Kemp's decision to marry after she becomes pregnant. In the background is news of increasing international tension between the US and Soviets which culminates in all-out war. Naturally, Britain is a target, eventually receiving more than 210 megatons. Jimmy is killed in the blast and Ruth is forced to deal with her pregnancy and the perils of survival mostly alone.

What follows is nothing short of a non-stop nightmare. Contact with the government is essentially cut off and the residents are left to scrounge for whatever supplies they can as fallout, and the sudden loss of electrical devices and sanitation destroys the lives of the people unlucky enough to have survived the attacks. Bodies are burned without burial or even simply stacked in random places as they pile up too quickly to dispose of. Nuclear winter destroys crops and causes a staggering famine. The complete loss of Britain's medical infrastructure leads to rather ghastly pragmatism, most famously when Ruth is forced to cut her baby's umbilical cord with her teeth, after giving birth, alone, in a decrepit farm. Within a year, Britain descends into conditions last scene during the black plague and 3 years later, the population has dropped to less than 4 million. The story continues over a period of about 13 years as we see Ruth's and, ultimately, her survivors' increasingly bleak lives. The, horrifying final scene, which I won't spoil, essentially makes the case that Humanity will never recover.

While threads is similar to subject matter covered in The Day After and in another American film with a somewhat similar premise, 1983's Testament, it is distinguished by being shot like a documentary. That decision saves it from "Acting!" one normally sees in the genre. It's also worth noting that unlike American depictions of nuclear war, where it's pretty clear 'we' were jointly responsible, Britain is quite literally caught in the middle of two far stronger belligerents. That kind of helplessness - knowing that nothing you did had any effect on matters at all - and that the production was deeply influenced by the actual aftermath of World War Two, gives it a kind of chilling realism that helps it overcome its 80's BBC budget and is why it remains terrifying to this day.

This Halloween, you could do worse than subject yourself to unrelenting bleakness of the end of things that could still quite possibly happen. It might not help you sleep, but at least it's a fine alternative to yet another Zombie armageddon.

Threads is available on DVD for regions 2 and 4.

See also part one, Blood On The Highway.