close
INTERVIEW: Also chats about whether or not his reputation as a special effects director precedes him

'Anonymous' Director Roland Emmerich on the Truth About Shakespeare, Rigid Scholars, and Making the Most Accurate Period Piece Ever 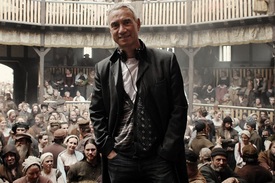 What do Shakespeare and Roland Emmerich have in common? They both love special effects. Shakespeare's Globe theater was outfitted with a trapdoor, flying wires and harnesses, fireworks, live animals, real blood and bones and a cannon—during a 1613 performance of Henry VIII, an explosion aimed at the roof accidentally set the thatched overhang on fire and burned the whole thing down. And Emmerich is the rare megahit director who enjoys tackling the past. Could Michael Bay have directed The Patriot without giving the Redcoats laser guns? Read on as Emmerich tells Boxoffice what convinced him to tackle the script—and why the effects he learned on films like 2012 make Anonymous the most accurate Elizabethan movie ever.

What an unexpected film from a blockbuster director known for his visual effects.

Everybody says Anonymous is so different. But I say, "It's not at all!" For me, it's just a great idea and I'm always looking for one idea that is totally unique and different and nobody has ever done it. In that way I fell in love with the script, because I thought, "Oh my God—if there is a iota of truth in it, then it has to be done." Then actually, to my surprise, I found out that a lot about it is true, and I'm now completely convinced that William Shakespeare, or William Shakespeare of Stratford was not the true author. So we said we had to create a world that feels very very real. Actually, I think we did the best representation of Elizabethan England ever put on film.

When you say best representation, what do you mean?

Because whenever you see movies of that time, they're like doing things which we didn't do that are obviously wrong. For example, in Elizabeth, which I like very much, Elizabeth lives in a church because they had to shoot in a church. But she didn't live in churches. She lived in palaces. So we looked at exactly how Elizabethan architecture looked and we created it. We did a lot of recreations with the computer, so we built or created everything. There was not much of reality to it. Because of that, it could look exactly like it looked back then.

That's a really interesting paradox: to capture 16th century reality, you had to use modern pixels.

And then, even when you look at something like Shakespeare in Love, there are not many theater scenes in it. We really went out of our way to show how theater worked in that time and how political it was. We looked at original clothes, because there are still original clothes existing from that time in fragments. And we found out that they do not look as perfect as, for example, in other movies. We made our costume design as imperfect as you can possibly make, you know what I mean?

Yes, the craftwork element does add a lot to the movie.

Exactly. And on the other hand, I always kind of said that it's interesting that there's always the question of what is true and what is not true. But I'm always thinking that good movies sometimes bend the truth. For example, Amadeus, a very good movie and one of my favorite movies. But Salieri and Mozart never met.

I didn't know that.

He also kind of didn't dictate the requiem to Salieri. It's just a great movie and it has an inner truth to it, which you understand that Mozart put an untalented person right next to him and that untalented person is actually much more powerful through his life than the genius.

You've got a very specific brand of bombast. But because everybody read Shakespeare in high school, because it was mandatory, people don't always regards it with the drama and the soap operatics that were so elemental.

I think Shakespeare, exactly, that's what it is. You read it in school and then hopefully, never ever again. But there's something to his plays, and when you analyze his plays, you all of a sudden find out that always every great writer wrote about the same things, the same themes. So what we tried to do was to take these themes and put them in our story, because in a way, we wanted to show that our Shakespeare—what we say is Shakespeare—is a really Shakespearean character. And because of that, there's a lot going on in the orthodox. The literary establishment doesn't like it very much when people start writing personal, autobiographical things, because they always say that when you look at the sonnets and the plays themselves, you would not say that this was the man from Stratford. Because why would a commoner write about kings and queens and incest and bastard children excessively? And in sonnets, certain things, like the hidden truths in all these things, it's just like a fact. Because of that, they say that everything that Shakespeare ever wrote was a literary exercise, even his sonnets. And I'm saying, "What idiocy." It's idiotic to think that poems are like literary exercises. Everybody knows when you're lovesick, you write a poem, you know what I mean? It's about feelings and emotions. It's about expressing your emotions. So to call those sonnets literary exercises...

It dismisses them. It's like saying you're just practicing.

Exactly! Whatever it is, I really learned a lot these last two to three months. I had a lot of debates going to universities. I have to say, it's for me quite amazing how rigid and how unmoving and undemocratic literature professors are. They're like kind of offended that we're like kind of putting a movie out when they're teaching their pupils certain things and how dare you question that, you know? I'm always saying, isn't teaching kind of about questioning? This is not the Middle Ages anymore, you know.

It's tricky though, because they're bound to a different god. If you're questioning the foundations of what they teach—

It's exactly that they're praying to a different god. It's more about belief than about questioning. And actually it's the same on both sides, whether it's the Oxfordian or Stratfordian sides. They're total believers and that's it. There's no arguing. I'm standing in the middle and saying, "Okay, so first of all, I only wanted to make an interesting and entertaining movie and tell a good story, and that comes for me first."

Do you feel people have the wrong impression of your work?

I don't really care. [Laughs] If I really cared, I would've stopped working. For me, I just do what I want and try to do the best that I can. And I don't ever read anything about my work.

You don't read the critics?

Not good, nor bad ones. Why should I?

Does it seem like drinking poison or drinking Kool-Aid?

Whatever it is, it only makes you think about things you shouldn't think about. I talk a lot with other people about my movies, and with writing my scripts. But that is constructive criticism in a way. For other people, it's just like a game.

So are you convinced it's Oxford?