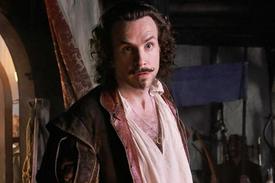 The new film Anonymous argues that the real William Shakespeare was an illiterate, murderous con artist and that the true author behind these masterworks in the English literary canon is Edward de Vere, Earl of Oxford. After all, asks the film, how could a humble glove-maker's son with scant education who didn't even mention his literary works in his will be the greatest writer in British history? Isn't it probable that the actual author of masterpieces like Hamlet, Macbeth, and A Midsummer Night's Dream was a learned aristocrat who had traveled extensively (especially in Italy, where many of the plays are set), held two Master's Degrees and had great familiarity with court politics? No, for the simple reason that de Vere died in 1604, nine years before Shakespeare wrote his last play. The real author of those famed 38 plays and 154 sonnets is one of these:

Christopher Marlowe: A gifted poet and dramatist, Christopher Marlowe died in 1593 at the age of 29 in a bar fight. Or did he? Rumor has it that Marlowe faked his own death to avoid being carted off to the Tower for heresy. He continued to write and publish plays under the pen name "William Shakespeare," whose first play was published in 1594. While in hiding, Marlowe shacked up with fellow death-faker Anne Boleyn—Queen Elizabeth's mom and the ex-wife of Henry VIII—and had two children. One of their descendants is the novelist Dan Brown. (A Cambridge scholar recently discovered the truth about Marlowe's secret life by playing backward a DVD of the Kenneth Branagh-directed Shakespeare porn parody, Blowmeo and Screwliet.)

The Illuminati: Although the agenda of this shadowy group is unknown, being the real Shakespeare just sounds like something they would do just so members could brag about it for centuries between drinking 200-year-old cognac, sleeping in Isaac Newton's coffin and getting killed by albino monks. In fact, some overeager pledge probably wrote all those plays while eating dried dog poop and Jesus' ashes as part of a complicated initiation rite, and a senior member—perhaps the English Chair of Oxford at the time—decided to make Shakespeare a literary phenom to collect the royalties. They've gotta keep Steve Guttenberg clothed and fed somehow.

J. K. Shakespeare: Like her peers Jane Austen and George Eliot (née Mary Anne Evans), Joy Konstance Shakespeare could only get published by using a male pseudonym. Thus J. K. used her feckless older brother's name, hoping to reap the financial rewards of her hard work. As a single mother down on her luck, J. K. reportedly wrote the first book in the Titus Andronicus series on napkins at an Edinburgh coffee shop while tending to her baby daughter, rewriting stories she'd heard as a child with her own updated twists. The books became so popular that she became the richest person in England in a matter of years, even surpassing the queen's treasures.

King Arthur: The once and future king of England vowed reincarnate himself to usher to his people to a golden age—and he did, a full millennium later during the 16th century. Under the shaky rule of a young queen whose legal and divine rights to the throne were constantly questioned, England under Queen Elizabeth was vulnerable to the threat of civil war and a Spanish invasion. Thus King Arthur reappeared to defend his homeland, but this time as a talented young playwright who would instill in the English people a sense of national pride that would last centuries. Some historians theorize that Arthur has returned to England yet again to counter its post-imperial decline, this time in the form of Posh and Becks.

Leonardo da Vinci: The Renaissance man for whom the term was coined, Leonardo da Vinci was a painter, writer, inventor, engineer, and time-traveler. It's scientifically impossible that a man that smart wouldn't have invented a time machine. However, 16th-century Italy lacked patent laws, so da Vinci became a paranoiac who wrote his diary in mirror-reverse to keep others from stealing his ideas. People soon figured out that old trick, though, so da Vinci was forced to leap ahead in time to Elizabethan England where he stored in Big Ben plans for a helicopter from which he could shoot wolves. He was less than impressed by the theater scene in West End (too many American actors), so he wrote a few plays to keep himself entertained before heading back to the 1500s.

Aliens: It's well known that visitors from Galaxy 23 arrived in the American Southwest thousands of years ago to construct the gravity-defying clay dwellings of the Anasazi, then returned to their home planet to hatch a plan for the New World Order, headed by George Soros. In between, though, the aliens—not the reptilian humanoids who control Al Gore, the other ones—created a corpus of literary masterpieces that humans would forever treasure. Why bequeath Hamlet to humanity? Not because they're theater geeks (though they're suckers for Rent), but just to prove that anything we humans can do, they can do better. Aliens can be such dicks.