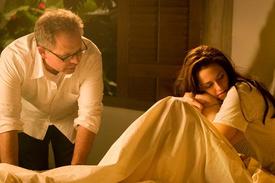 Boxoffice recently chatted with Bill Condon, the director behind the last two installments of the beloved Twilight Saga. Check out an excerpt of the interview below.

We interviewed Robert Pattinson a while back and he said the only other director he could imagine handling the blood of Breaking Dawn was David Cronenberg [The Fly, Naked Lunch].

And then he went to work for him! [In 2012's Cosmopolis] But I know what he means because it is very, very intense in the last part—it's almost like a horror movie. And he's certainly delivered the most intense images in the last decade or so. I tried to get my Cronenberg on a little bit and I think within the confines of a PG-13 rating, I think we've got something that's pretty powerful.

Everyone has been saying for years how hard it would be to make Breaking Dawn PG-13. How did you pull it off?

The whole movie is very immersive, kind of like in the book, which is in the point of view of Bella and Jacob [Taylor Lautner]. We tried to do the same thing in the movie—there's a whole chunk where you get inside the head of a wolf. And in terms of the birth, it was, "Let's do it from Bella's point of view. Let's see whatever she can see." Once you decide on an approach like that, it's amazing how powerful you can be without being overly explicit. She gets glimpses of a lot of things—and hears everything—but it's not the cutaway to teeth clawing through flesh. But you certainly know what's happening.