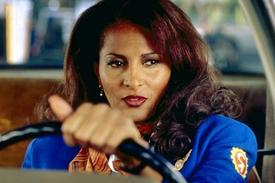 Full disclosure: I recently asked Pam Grier to marry me. In my defense, she's one of the most incredible women in the world. Not only did she transform '70s Blaxploitation clichés into a legitimate symbol of female empowerment, she starred in Jackie Brown—one of the most interesting and enduring films of the last two decades—while working on TV and in theater as one of the most prolific and versatile actresses of her generation. And if that weren't enough, she's a skilled outdoorswoman who invited me to go hunting and fishing. Neither of which I know how to do. But for her, I'd be willing to learn.

I sat down with Grier to talk about Jackie Brown, Quentin Tarantino's 1997 classic, which makes its Blu-ray debut this week. In addition to discussing Tarantino's approach to working with actors, Grier makes me jealous by describing her magnetic chemistry with her co-star Robert Forster.

Let's start by talking about that opening tracking sequence at the airport which speeds up from Jackie Brown standing still on a moving walkway to hustling to get to her departure gate. What were you thinking about during that scene?

Well, it would set up her inner strength. She's meticulous, she's taking pride in this job, this last job that she has on a commuter airline when everyone else is like, they don't care. She cares. She has pride. And she's polished and secure and confident. She has authority and she's quiet and then she realizes that she's going to be late so she starts walking a little faster because she really cares about her job.

Although Tarantino is known for his dialogue, you do a lot of character work in the film non-verbally.

Fast forward to her coming out of jail. Everything's been stripped away from her. Her hair has been showered and nappy, she has the stench of a jail. Her soul has been stripped away. She has no clue where she going to go. Max Cherry bailed her out. She's in trouble. So I wanted to tell a story with each step and with each breath, how she walked out. It's completely different from the opening shot of being up and perky and happy—now she's walking out, telling the next story about her life. Tarantino is very poetic about movement, like Balanchine, like the choreographer, ballet dancers, how your posture, your body, your movement, your timbre tells the story about her. So that's the exterior coming from the interior, because we're going to get to everything else. I don't know if in some of the other films he had done prior to that he would show the body movement in such a way, but that, for me, that's what I got from it. Because he's cerebral, he's action-oriented, he's so many other complex things about making a film: a person, a set, a color, design.

The other thing about these tracking shots is that it's not like theater—you're really in that space. How tough is it to focus on the logistics of the shot, and still stay in character?

And I always ask when I work with a director, "How long do I have in this scene to tell the story, to arc it? When is my arc is finished and it's the end?" I don't want my performance cut, so I need to know when I need to do what I have to do before you might cut. That gives me a sense of timing. Because I might have to get to a certain distance, and say a certain amount of dialogue and tell the story, and I don't have enough space before I'm there and I haven't given my thought or told the story or my dialogue. So I need to know, should I be further away? Or closer? It's something that the actor does to make it real and believable. Because I know sometimes we'll have too much dialogue, and I can't get it all out by the time I get there. I need to walk around the block, have a smoke, and then I'm ready. But you'd be surprised-there's not enough distance to give the dialogue sometimes, like, that's not going to work. I need to get that dialogue out before I get over there. And that's like theater. Theater teaches you to do that as well.

Quentin would say I'd get into a zone where there could be explosions, gunfire, and I don't hear it. I'm in the moment so intensely and I have to feel everything from the actor. He lets you know where the camera's going to be, and I just think he knows that actors do that work, they really focus and concentrate. And there's no Take Seven —it's one or two, maybe. And to be in that moment, you can't work with him if you're not there. Nothing else is going on but that scene. And you know he's blocked it, he set it up for you, you're expanding, you're reaching. The other actors feel your energy and give it back, and there's this wonderful interaction that is what we do, whether on stage or on a set.

You and Robert have amazing chemistry in the film.

To work with him is liberation. It's expansive. He gives you so much to reach for. And working with Robert in that scene that was written so beautifully, I just felt this sense of raw intimacy. And I'm going to ask him if he wants to come with me, because he was my strong silent warrior who literally put his life on the line for me and no one had ever done that before. So he was very special. But I also respected the fact that he could say no. How do I accept his rejection? Is it rejection of me or the circumstance? And he had such respect for himself to say, "No, I have a job and thank you for liking me, for caring about me." And there's this wonderful feeling that we have, we share.

What sort of guidance did Quentin give you to make that romance work?