'Footloose' Director Craig Brewer On Keeping In Sex, Death and Rock and Roll 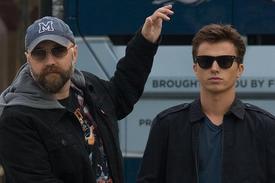 Footloose again? Really? Yes. But in a shocking turn of events, this reboot is seriously good. Credit for that goes to Black Snake Moan and Hustle and Flow director Craig Brewer who took the skills he learned making stories about rapping pimps and crazy Bayou kidnappers, added an unapologetic Southern flair, and topped it off with a killer understanding of how to make dancing look incredible onscreen. The result is one surprisingly satisfying remake. I tested my dance skills with the man himself in a pas de deux interview where Brewer waxed philosophic on why Footloose might save the world—seriously.

Footloose is a departure from your previous films which were about pimps, drug dealers and kidnapping. This feels like your first attempt to make a outright mainstream movie.

I've wanted to do a mainstream movie. I'll never forget this talk I had with John Singleton right after he did 2 Fast 2 Furious. He said, "It really bothers me because Hollywood is about making movies. I'm going to always try to make different movies, movies that are personal, movies that are indie, but why is it that people think it's okay for the big budget movies to be made by music video directors straight out of college when people like me and Spike [Lee] should be making them?" This was right around the time Inside Man came out, and I can understand what he was saying. It's what I've always respected about Soderbergh's career, he can do smaller movies but he's also doing Ocean's 11. I had that in mind for myself when I finally agreed to do Footloose. I was very resistant—

You were approached to do Footloose?

Very much so—twice in fact. I passed on it twice, but they kept coming after me. And I liked what they had to say which was there hasn't been a teenager movie like Footloose in a long time. The way the market has been gearing toward teenagers, it's been mostly gross comedies, action, sci-fi or superheroes. But there really hasn't been that experience you have when you're that age, or the way you felt when you were say, 13 and you saw the original Footloose. And they were right, so I started thinking about it more. Even like the modern dance movies don't have the same heart, the same center, that Footloose had for me when I was 13.

You've been pretty faithful to the original, with some broad strokes. I noticed that the kids in the very beginning are actually listening to the original "Footloose" by Kenny Loggins.

I see it as, I think that in about 27 years there's going to be another Footloose because we're going to need it, but that's kind of the interesting world in which we live. I know so many people that know "Footloose" other than from the movie. They know it from dances, they know it from Bar Mitzvahs, weddings and all that. There's the legend that Kevin Bacon would actually pay DJs not to play it when he was around, and that's the world I wanted to show in the film.

I was struck by some of the changes you did make, how apparently in Georgia there's this underground dance scene of kids that's a cross between You Got Served and Fast and Furious at a drive-in. Obviously in the original they're in a diner—

Called the Drive In!

Exactly! And though it felt like an escalation, it also weirdly felt like something people actually do. Did you feel like there was an innocence in the original that you were moving from?

Well aside from dancing, I actually feel the opposite of most people: I think there's some incredible darkness in the original film. I know people will view this as sort of my bigger project that's accepted by a broader audience, but I'll never forget my first meeting after I accepted the job, talking to some of the execs at Paramount and I asked "So, can I actually adapt the original Footloose? I'm going to change it up but can I take Dean Pitchford's original script and do it?" They were like, "Why would we have a problem with that?" and I said to them "Okay, so you're cool with teenagers smoking pot, teenagers drinking, teenagers getting killed, and you're cool with Ariel having premarital sex—she's pulling up her pants in the original—her boyfriend beats her up, she's bleeding from the mouth. You're cool with all that?" And there was this pause and one of them said "I guess we need to watch Footloose again." I loved all the music, I loved the dancing, but I got caught up in the drama.

You know, '84 was a big year for that kind of stuff. Purple Rain had some harsh violence like that, and it came out months after Footloose. These movies aimed at teenagers, it really made me realize there was this hard, palpable, sweaty, bloody world out there, that you're just trying to find happiness. I actually think that impression on me then ultimately led to Hustle and Flow and Black Snake Moan. I know that people may look at that drive-in sequence and think, "Oh, he's adding rap," and doing that kind of stuff, but I'm really just trying to tap into what I see. Like in Memphis, Tennessee on Riverside Drive, these teenagers park their cars and crank up their music and just dance. They're always getting busted by the cops. I wanted to tap into some of that with this movie.

I have a great story about that. There were moments in that film I wanted to keep and that was one of my favorites. It was this great line and I think people laughed at it, but I think what people really liked about the line back in the day is that it was a veiled way of calling Renn a fag and he turned it around on him in such a way that audiences immediately got on Renn's side and laughed. I went in wondering how we were going to do this, pay tribute to the original by taking the line, but I don't even think kids even know what pansy means anymore, so we did it two ways: one where he says, "I thought only pansies were into gymnastics," and another as you see in the movie. And the way you see in the film worked best.

And you know what? Because it's Footloose, I get to say that line. A lot of the things that are in my movie, including the pot smoking, including the beating Ariel up, I don't know if studios would necessarily have let me do it. But because it falls into what I call the Romeo and Juliet clause, like if they told me, "We want you to do Romeo and Juliet, but don't have any teens committing suicide," I'd have to ask why they even want me to do Romeo and Juliet in the first place. Because it's already established, because Footloose is playing on VH1 in rotation, I'm allowed to do these things that otherwise I wouldn't be able to explore. It's an interesting double-edged sword with the whole thing.

I feel like that line is really going to resonate with people, especially in the wake of events like that horrible suicide that occurred in Buffalo, New York—

That story breaks my heart every time I hear about it.

And you have a multi-racial cast, which clearly isn't an issue for the characters. Do you feel like teenage culture today is more accepting and tolerant?

Well, we played it in a screening in Tennessee, and after he says "I thought only assholes still used the word 'fag,'" we got an ovation, applause, and I thought, "Could it be? Is it possible that we might be actually making the world a little bit better of a place with Footloose?"

The original is also set in this nondescript midwestern town, but for your version you made it expressly the South—Georgia—and Renn comes from the North, from Boston. Were you making a statement about the state of things in America?

I live in Memphis, Tennessee but I was raised in San Francisco and when I would visit my family's home in the South, I was the kid from the Gay Bay who listened to musicals and danced. I was made fun of to some extent, but my family would love and protect me and that's something I think is in the culture of the South that's misunderstood. I mean, I've been around the "Yer not from around here, you can't come here and tell us what to do," very Confederate type of voice, so I've seen the good and bad of the South. Every few years I see these Red State/Blue State, North/South conflicts rise and fall, like with my big family over dinner and I'm like "Wait a minute, everybody stop arguing!" I kind of feel like maybe these arguments start because we love something or somebody, we start talking about what's best for someone, and everyone starts drawing lines in the sand. And once I started thinking about it on that level, once I started thinking that Footloose could mean something more in terms of-I don't like saying things like "post-9/11"—but we are living in a time of overreaction. And I think that our hearts are in the right place, but sometimes those things that we do have repercussions. I felt like Footloose could be put in that context without beating you over the head with it.

Finally, in the original movie, the backstory is that they've moved to this small town because of Renn's parents' divorce, which at the time was considered this horrible tragedy. Obviously, nowadays not so much. You decided to add mutual tragedies to the film: the minister (Dennis Quaid) dealing with the premature death of his son and Renn dealing with the loss of his mother. What went into your decision to make that change? Was it a reaction to the fact that divorce is no longer seen the way it once was at the time?

When I read Dean Pitchford's original script I noticed that, like many movies, he wrote things into the script that ultimately didn't make it into the final version. One of them was was a more developed conflict between Shaw and Vi, the preacher and the preacher's wife. I asked about that and I found out they did that because they just didn't know how the kids were going to work out. They could lean on the adult part of the narrative should the kids not be all that good. I felt by the end of my movie, the resolution needed to be less between Shaw and his wife and more between Shaw and his daughter. But more than that, I wanted to make Renn more alone, more someone who's experienced death. My grandfather died of throat cancer. It was long, it was horrible, it changed him in front of us. My dad died of a heart attack. He was completely a healthy guy, age 49, never drank, wasn't sick. And one day, at work [snaps fingers] out! Everybody has, or will experience death, but they may experience it differently.

There was something about having Renn finally at the end of his ordeal coming to Shaw, and finding peace and understanding between each other due to their shared understanding of that loss. But getting there differently around the law banning dancing in this town, with each approaching it as a way to cope with that loss.