close
Opinion: In which I navel gaze about the future of war films in the age of YouTube.

Gaddafi, OWS and Monet: Will the Historical Drama Be Obsoleted By Viral Video? 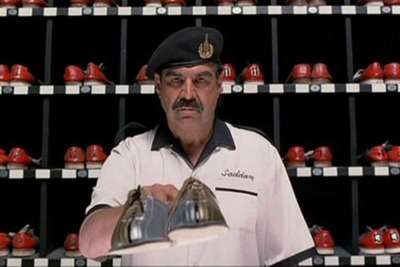 Inserted into the cries of celebration for the newly liberated Libyan people is what might be the most disturbing Internet moment in years - the viral, meme-like spread of videos showing the gruesome death, and later, the corpse of former Dictator Muammar Gaddafi. I don't mean to call into question the character of people who have seen them - despite my rather delicate sensibilities I caught the video of his corpse myself; this is almost* living history after all. But as the video inevitably becomes one of the most watched in Internet history, I can't help thinking 'now we know how the movie ends'.

Until quite recently, really about 8 years ago, the technology needed to record actual history while it happened was prohibitively expensive, not to mention bulky and somewhat fragile. Additionally, until the Internet we also lacked a means of quickly dispersing recorded footage before it could be edited or even destroyed. This meant that so many major events of history had to be pieced together by surviving witnesses, from extant documents and conflicting reports. Now nearly everyone with a phone is also carrying around an astonishingly advanced video camera and a connection to the Internet. This has drastically changed the way we consume history and even experience current events.

When 9/11 happened just over 10 years ago, it was captured mainly by news crews and photographers. Those who survived were able to tell their tales but we had to imagine for ourselves what it was like. Movies based directly on the events of 9/11, like United 93 and World Trade Center have been a mixed bag, but quality or not like the big events before them, depictions had to piece together a story from numerous confusing and often contradictory accounts. Now skip ahead to 2006, when footage of Saddam Hussein's execution, taken surreptitiously by someone who attended the hanging, became a viral sensation. No matter what mysteries surround the opulent, corrupt life of the man, his death is documented for all time in grisly detail.

In the last week we've seen not only the gruesome Gaddafi videos, but also the spread of footage documenting atrocious NYPD violence against Occupy Wall Streeters, and both tell a story that's hard to imagine being topped by a straight dramatized account. Of course, I admit that I'm obviously trolling with the title of this post. So long as there's a good writer with a strong vision, the events of history will always be adapted for stage and screen. But even with that in mind, it's not hard to imagine that dramas based on the current events of our time will be affected by new technology the way the impressionists of the late 1800s were affected by the advent of the camera. Perhaps we'll see increasingly meta takes on history, like a story that focuses on whomever captured the film of Gaddafi, or on the life of a cop after they were caught doing something that forever tars them, rather than a straight retelling of events. At the very least, either would be more interesting than anything yet made about, say, the 9/11 attacks.

Fortunately, as long as governments do everything they can to keep camera away from war zones except for very limited purposes, we'll always have war films. And while I can't get behind official censorship, I think I'd rather watch Band of Brothers than video showing the horrors of Bastogne.