close
OPINION: Opinion: Sometimes, paying tribute to someone only serves to remind us how far they've fallen.

Harrison Ford Plays 'Uncharted 3' - Was The Torch Just Passed In The Wrong Direction? 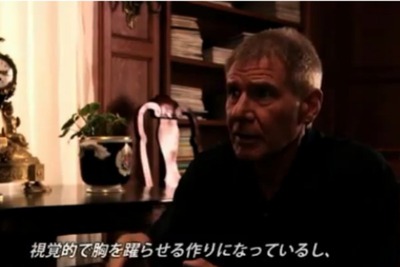 On Tuesday night, Boxoffice sent me to a movie theater in Century City to attend an event Sony put on for their upcoming video game, Uncharted 3: Drake's Deception. I'll have more to say about that in the next couple of days, but my immediate thought was that the point at which video games should be treated as a serious rival with cinema in terms of mass entertainment value and storytelling is rapidly approaching. We're not there yet, but judging from the scene last night, and a similar experience I had in a warehouse packed with people watching a Call of Duty tournament, people will be ready when it happens.

That thought was still on my mind when I saw a funny Japanese commercial for Uncharted 3 featuring a charmingly befuddled Harrison Ford playing it. The ad capitalizes on the fact that the Uncharted games' primary inspiration is the Indiana Jones series, (with a dash of Allan Quatermain and Nathan Fillion's personality thrown in). Seeing Indy playing as his spiritual successor is a cool idea. But it's also a bit awkward to see. A longer video of Ford playing Uncharted has been posted online and it only makes that feeling of discomfort worse. Here is the whole thing:

Man, remember when he was cool? Though he's never been a very flexible or varied actor, he had a real talent for portraying flawed heroes, obsessives, desperate people. His charming personality was a bonus instead of the thing that made up for a lack of ability, and there was a time when one could plausibly make the case that he was the closest we were going to get to another Bogart. Then he started making the kind of bland blockbusters that could meet his high price and gradually descended into a string of unmemorable garbage like Air Force One and Extraordinary Measures. When he finally returned to the Indiana Jones series in 2008, the result—Indiana Jones and the Kingdom Of The Crystal Skull—was a terrible mess whose only lasting contribution to popular culture is the phrase 'nuking the fridge'. Ford's performance in particular was foggy. Frankly, the good first 20 years of his movie career have been really smeared by the baffling mediocrity of the last 13. If he was hoping for a return to coolness, he didn't get his wish.

People still love the original 3 films, and Uncharted wouldn't exist without them. But watching Ford play, clearly confused by the whole thing and inarticulate to boot, it feels like seeing the torch passed in the wrong direction. Rather than the cool older guy bestowing his experience and wisdom on the young up and comer, it feels more like the washed up has-been stealing a last bit of reflected glory from the kid who finally beat him at his own game, and doesn't quite understand how it happened. It's too bad Uncharted developer Naughty Dog couldn't meet Harrison Ford's price, because casting him to voice a character, rather than shill for the finished product, would have been an inspired move for both parties.

Fortunately, Harrison Ford remains rich, his good movies remain good, and when he dies he will only be remembered for the quality work and not for Hollywood Homicide. But this video seems to ram the message home that whatever it is we loved about him, we'll never see it again.