close
OPINION: Despite my raging cynicism, Real Steel successfully made me tear up like a baby. Why?

I Am Programmed To Cry On Cue or: How 'Real Steel' Shamelessly Won Me Over 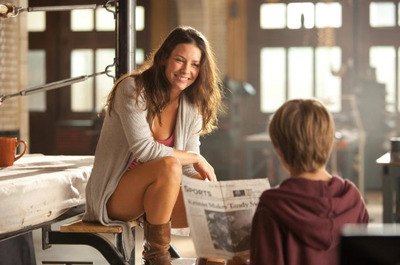 And I'm not alone. Audiences responded likewise and made it this weekend's box office champ. Good job, audiences!

But it's also filled with shameless emotional pandering that, as a cynical hipster cliché, I should be immune to. Sad to say, I totally fell for it and 3 weeks later I'm still trying to figure out why.

Just in case you didn't see it: Charlie Kenton's (Hugh Jackman) boxing career was cut short by the rise of robot fighting and as the film begins, he's going into his 11th year of being an insufferable jerk about it to everyone. That includes love interest Bailey (Evangeline Lilly), and the long-lost son he never knew about, Max (Dakota Goyo). As Charlie and Max go into robot fighting and their robot, Atom, achieves surprising success, Charlie regains his humanity, establishing a relationship with his son and repairing the one with Bailey. Never subtle, Real Steel mostly manages to keep things balanced between the maudlin and action-ey.

That is, until the climax, and the most unbelievable emotional manipulation I've ever seen.

See, Charlie's transformation from jerkass to great guy happens during the final fight when, piloting Atom via 'shadowboxing mode', he finally experiences real boxing in a title fight. It's an awesome scene. You know it. I know it. So do Bailey and Max, who are both so overwhelmed by Charlie's long-denied personal fulfillment they can barely contain themselves. And then Max glances into the fight's audience and makes eye contact with Bailey.

No joke, they actually openly weep in unison, Bailey framed by a halo of stadium lights that make her tears look like rivers of molten silver, Max illuminated by those same lights, his less-flowy tears shining like bits of moonstone in the corners of his eyes. It's absurd. It's awful. I will be making fun of the scene until I die. The only thing missing is a subtitled "you are overwhelmed by triumphant happiness!" to really drive home how clumsy it is.

But despite this, just like everyone else, I teared up during the simul-cry and right after it happens, when Atom goes the distance and is declared "The People's Champion", I wanted to pump my fist. I'm baffled, but my gut-reaction hypothesis is that Real Steel usually stops just before crossing the line into cheap tearjerking, by redirecting your attention back where it belongs—the fighting robots. By the time the filmmakers stop restraining themselves, you've already bought into the film completely and forgive its excesses.

But that's vanity. The reality is that emotional appeals either work, or they don't, which is a crude way of saying that if you have to ask, you don't get it. Real Steel isn't perfect, but future filmmakers looking to jerk a few tears out of an unwilling audience should take notes. If you can get me to tear up, you can get anyone.