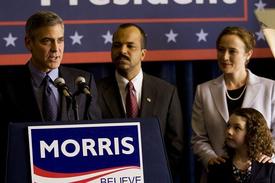 Grant Heslov and George Clooney forged an alliance years before they commanded serious Hollywood clout. Both did their time doing sitcom walk-ons on The Facts of Life the '80s, upgraded to roles on long-running detective shows (Heslov did Columbo, Clooney did Murder She Wrote), and started their feature career with dubious sequels like Revenge of the Nerds III (Heslov) and Return of the Killer Tomatoes (Clooney). When Heslov launched his writing and directing career with the short Waiting for Woody, Clooney—then an ER heartthrob—agreed to play himself. Heslov returned the favor by co-writing and producing Clooney's Good Night, and Good Luck., which won the men six Oscar nominations. Now both comfortably ensconced as actor/writer/producer/directors, they've never run out of projects to talk about, following up their under-appreciated military black comedy The Men Who Stare at Goats with the tricky political thriller The Ides of March, based on the play Farragut North. The story of a Presidential candidate (Clooney) who leads his campaign awry, it's apt material for a partnership that's always worn its activism on its sleeve. Their goals haven't changed—but the times have. We ask Heslov about the risk of making a political film in a tensely divided era.

Whose idea was the project?

I guess it was both of ours. I read the play and George read the play, and we decided that we wanted to buy it and try to make a film out of it.

It's political, which means it's going to be divisive. What kind of talks did you guys have about how to deal with that?

We wanted to present a candidate that seemed like a good candidate, like a guy who you'd want to be president. And then we wanted to have him do something terrible, which he does. In that way, we thought we'd sort of take the edge off it a little bit.

Take the edge off meaning—

Well, we take a Democrat and we make him a real scumbag. And he does a pretty dastardly thing, I think, as does Ryan's character, obviously. But the truth is we weren't trying to make a political film. We were trying to sort of write a morality tale set with a backdrop of politics. It happened to be politics. That was the play that we read and that we were attracted to. But this story could take place in Big Business. It could take place in any number of professions. Because it's really more about making the choices that we make, and the idea of what we will do to win—how much of your soul you're willing to sell.

There's a lot of strategy that you ask the audience to absorb.

We try not to explain too much, you know, is our philosophy. We like to let the audience catch up. So we're not too concerned about spoon-feeding, about them having to understand every little nuance of the strategy. I'm more interested in making sure that they understand character and that they know that the stakes are high. Those are really the things, and so we didn't worry too much about the those other beats. I think most of the people get it—most of the people that I've talked to and have seen it, nobody's been like, "I didn't understand!" and "What was going on?"

Other interviewers? They aren't the most honest.

No, I'm just talking about people who've seen the film. People who I know and who I trust. Not that I don't trust you. [Laughs] I mean, you show the film to people because you want to see what the response is. If somebody says "I don't understand"—and if you hear that over and over, then that's something to think about.

There comes a time when the film ceases to be so much about the political landscape and begins to be more about personal drama. That transition feels very smooth, but at the same time, it really highlights the fact that we're dealing with kind of two different situations, kind of two different movies. Was this a concern?

No, not a concern. I mean, you have to set a certain amount of, you have to set the table to sort of shift into that other stuff. And like I said before, I think that politics really is meant to be the backdrop for this larger sort of morality tale. And yeah, it definitely kicks into another gear when all that stuff starts to happen, for sure. And that's what we wanted. I mean, we wanted to sort of, you know, catch the audience sort of off guard and then really just jam them home the rest of the way.

You direct and you've directed Clooney before. But now he's the director. What parameters did you establish on the set?

You know, there really aren't any parameters. I mean, he's the director, and in a film the director is—

Is the dictator, you know. And George is really good at being very open to hearing all kinds of things. But at the end of the day, it's gonna be his decision. But we've worked together so much, we sit in a room and write together, we have a partnership, we've done this enough so we really have a shorthand: we don't really have to say much.

It's a little bit like that. And particularly if he's in the film. If he's doing a scene and he's acting in it, he'll do a scene and he'll walk up and he'll go and I'll say, "Maybe do one more." And that's just the way that we work.

The dictator, as you put it, makes you feel like you must hold up your part.

Right. You know, the thing is is that making movies—it's not brain surgery, it's not rocket science.

Meaning that it doesn't change the world?

No. Look, art has its place, but, we're not doing open-heart surgery. Nobody's gonna live or die based on the work we're doing. Also, when I say "work," tarring and roofing—that's work. So we're privileged. We're lucky to do what we do. And in that context, it's like, you gotta have some fun you've gotta make it fun and you can't take it too seriously. And that's the context in which we work. So even if it's a deadly serious scene, if you can't laugh at something because what we're doing is so important, I think it affects the work.

But a morality tale set in a political milieu. That actually sounds fairly important.

Well, it's important until you study what else is happening in the world. Not to belittle what we do or to make movies unimportant—because I think they are—but, you know, it's a big world.