close
INTERVIEW: Also chats about performing Shakespeare, and whether Twilight mania has reached him 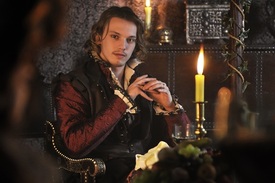 At 22, Jamie Campbell Bower has been seen by millions, even if they don't remember his name-or face. After small roles in Harry Potter and the Deathly Hallows Pt. 1 and the Twilight saga (Gellert Grindelwald or Caius Volturi, anyone?) he's ready for his own spotlight playing the young Earl of Oxford in Anonymous, a precocious intellectual with the guts to get Queen Elizabeth into bed. Boxoffice finds Bower eager to volunteer his tips to bag a royal romance.

It takes balls to seduce the queen.

Yup. Yeah. How did I do it? Want any tips for those out there who want to bag a queen?

Sounds terrible, but bizarrely or not, it actually came pretty naturally to me. [Laughs] I supposed talking to Roland and to Reese about this character and who he was and who he was in his younger life and doing a bit of research, you know, we decided that there's this arrogance about him. He's obviously very highly intelligent and an intellectual and very well read and all these kind of things. And that, I think, comes from a sort of cockiness and self-awareness. And so you have to bring that through, and he's a very strong-minded, strong-willed chap, so I just focused in on that and it was sort of easy. Maybe that means I'm really cocky.

Well, at least that leads me to my next question: How do you play a genius?

Oh goodness. Well, with the bits that I was doing with the character, his passion and his desire lies in writing and that need to write. That part of his genius comes through. So when his works are taken away from him or when he's not able to write, that confuses him. It's like saying you can't do the thing you love the most—you can't have that.

You can't have that thing that clears your head.

Exactly. And what makes you who you are. It's like someone taking a slice of life away from you.

So he's a writer with swagger. You have to know people like that.

You're right. I knew people at school, and I still have very close friends of mine who are incredibly brilliant, and they do have that sort of awareness. They know that they're good, but they don't speak it openly. They just hold themselves—the gait and the poise and the way they hold their language—so you can see and almost smell it when they're there. I don't think it's even conscious. I think it's sort of a subconscious thought, maybe the way that their brain is wired or the way that they just have this desire and this passion to learn and to create. It does create something different about a person, I really do think. And yes, I did draw on those people that I knew—but by no means do I dislike those people. [Laughs]

Did knowing in the script that you and Joely [Richardson] were mother and son make your love scene even more awkward?

I thought you were going to say, "Did knowing that you and Joely were going to get it on, did that make you do the film?" If that's what you were going to say: Yeah, I'm sold. The moment I read that, I called and said, "I'm in." Doesn't matter what it's about, I'm sold. But to your real question: No, because I didn't focus on it. The character doesn't know it at the time, so it's better not to know. It's better to put those things at the back of your mind. And he didn't know up until the point where he's much older.

What do you think happened to the Earl in the years that we don't see?

It's interesting. His desire and want to write and to create gets squashed so much between the ages of when he goes and moves in with the Cecils and to his death. In those interim periods of roughly 10-15 years, maybe he still has to create—he has to do it in secret, you know. He's married into this household whereby everything that happens to him is wrong, and he's wronged all the time. And I think it takes quite a lot of resolve for that not to break a man entirely. And by no means is he a broken man when we see him at the end, but there is something missing, and there's a sadness and vulnerability about him. So I suppose that just sort of carries on through, as he got older.

That suggests that he was somewhat complete in his youth when you were playing him.

Well, I suppose when we first encounter him as a young child and he's performing and then when he moves into the Cecil household, he is complete. He is very much aware of what he wants to do, but then immediately, that is squashed by the Cecils completely. He says, "What about art and poetry?" and they say, "That's a sin. This is a house of God." That whole idea to him is completely alien. It's an alien idea. And so, he still writes, but then he does get squashed and squashed and squashed until he does become different. He does become a different man. But that burning desire and that intelligence is definitely still there.

While doing research and preparing, did you come across any information that contradicted the Earl as he is in the script-and if so, did you make yourself forget it?

The only research that I did was very factual. So, it was mainly to do with moneys going in and out of his account, where he'd been, and not so much his relationship with the court. So I personally didn't come across any research that contradicted the way that I wanted to play him. Did I come across any research that contradicted the idea of the film? Well, yes. You have to look at both sides of the argument. You have to look at the Strafordian argument and you have to look at the Oxfordian argument. If you didn't, then that's stupid—that's moronic—because in what way can you have a debate or even talk about a film or even be involved in a film if you don't know the two sides of an argument? But, did that sway me in any way? Not particularly. And do I know or do I have an opinion as to whether it was Oxford, or Johnson, or Shakespeare, or any of these people? Not really. I didn't know William Shakespeare as a person. The words to me just sum up a body of work that was created, which were incredible pieces of literature.

How do you think England is going to receive the film?

I think it will be interesting to find out what the reactions are going to be. Yes, there will be a lot of people who maybe think that this is blasphemous. But, also there actually be a lot of people who won't necessarily have heard this theory or this argument before. And I think that's art. If cinema as a medium can do that, then that's kind of amazing.

And the point, right?

And the point of creation! Exactly. Exactly.

As a young British actor, how much Shakespeare have you already performed?

I did a lot of Shakespeare at school. I did this thing with the National Youth Music Theater. We did an adaptation called The Dreaming of Midsummer's Night Dream. We toured it. We took it up to the Edinburgh Festival and so on and so forth, so yeah, I've done quite a bit.

What was your part?

I was actually playing Puck.

Final question: Has Twilight mania trickled down to you?

I mean, I suppose I'd be lying if I said it didn't, if I said that it hasn't introduced me to more people. And people are more aware of who I am now. But has the mania trickled down to me? Not really. You know, I'm not cast number one to ten in that picture. I'm not the poster boy for it, so I'm fairly able to do what I want.