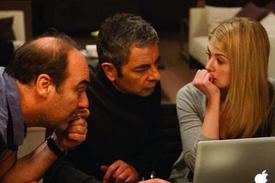 Nearly ten years later, Rowan Atkinson has decided to revisit Johnny English, a character he created when the old Bond style was still dominant, and the idea of a War on Terror was still kind of a new thing. Since then we've had a global economic meltdown, a vastly changed international and political framework and more importantly, the total transformation of Bond, thanks to the success of the Jason Bourne films. So it makes sense that the guy chosen to shepherd Johnny English into this scary new era, director Oliver Parker, is a man known more for adapting Shakespeare and Wilde than for broad comedy.

I traveled to Parker's secret spy lair to discuss his nefarious, behind the camera masterminding of Johnny English Reborn. We talked about Oscar Wilde, how it's good to suffocate a joke, and why Rowan Atkinson should play Don Quixote.

Your first three features (Othello, A Woman Of No Importance and The Importance of Being Earnest) are theatrical, serious and certainly things our culture considers more rarified, even "important." Since then you've also made more broad comedies, like the St. Trinian's films. Can you talk about that transition?

Well I certainly like to mix it up. I've got a couple of more serious works in development right now. It started that way because I was an actor for about 15 years. I'd been playing Iago on stage for some time and became obsessed with the piece, I started to think about the thing as a director on stage and thought that a lot of the play suggested powerful visual elements, as well. So I started adapting Othello for film with the intention of playing Iago myself, but the more I got into the project, the more I decided I needed to concentrate on the directing and let someone else tackle that role.

You certainly found the guy to do it—

You could say that Kenneth [Branagh] has had a go at Skakespeare before. And that was a way in, and even then I was wondering if I'd go back into acting, but directing bit me, so to speak, and a lot of the emphasis was on taking stuff which I've done on stage and being frustrated with how rarified, as you said, those things have become.

Yeah, and in Britain, too. The theater community is a very cozy, lovely audience, of course, but they come along to sort of hear the works done as they expect them to sound. There was nothing fresh about it, especially with the works of Oscar Wilde. I wanted to blow a little dust off them, show their energy.

Do you feel your obvious affection for the works of Oscar Wilde affected how you approached working with Rowan Atkinson and making Johnny English?

Oscar Wilde very much emphasized his words, and coming that background, the word is still very important to me. Rowan is also very concerned with words, which was a big appeal, and Hamish [McColl], the writer—in fact, it was his script that convinced me to take the film. I wasn't convinced it was a good idea until I read it. I thought it had a lot of ambition, and when I met with Rowan I could see he had ambition for it, too.

Johnny English is based very much on the classic Bond archetype. Rowen has specifically said that you thought about drawing from the Jason Bourne movies, but he felt that it wouldn't work. I think he said that, "Comedy needs room to breathe," and the Bourne movies' quick cuts and unrelenting action doesn't have that room. How do you feel?

I wouldn't entirely agree. It often does, but it depends on how hard you're pushing on the pastiche pedal. For me the fun was in mixing things up. Sometimes it does, as he says, need room to breathe but there are other moments, like the wheelchair chase [Johnny English escapes from a large unit of police cars on a souped-up wheelchair] where it needs to have quick cuts. It was a bit of a journey for both of us, I would say. We agree on a lot of things, but in some ways we disagreed. Like the fighting scene near the end set in a cable car. He said, "My goodness, there's an awful lot of shots!"

He really said that?

[Laughs] Yes, he said he wasn't sure if the viewer could follow it all. But in my opinion, the joke is this scene had to work like an action movie. Then we can cut to the moment where Rowan is hit in the ballsack. We own that space and we can't always have room to breathe-we occasionally need to bloody suffocate.

Obviously. I'd be interested to see what he says about the same scene now, but he has incredibly strong views about comedy, and we didn't always see eye-to-eye. I think perhaps it's good to be a little cognizant of the style a modern audience expects. I think there's a balance needed, especially in a sort of longer narrative like this, where you think, "God, does he have to be a klutz the whole time?"

I was thinking about that during the film. In the first Johnny English movie, the arrogance was there but he was also clumsy and inept. Now the comedy comes from how he's basically a smug prick.

Vanity is always one of Johnny English's problems, I'd say. Perhaps that's a bit of a harsh judgment: he's certainly arrogant but he learns to listen to others eventually. But it is his weakness, if you like. The idea is that he isn't a fool. That little strand of vanity is the one thing that stops him from being quite a good agent. He's reachable, but that little gap gets in the way.

There's a joke in the script that the British government has sold the corporate naming rights to their intelligence sector. It's now the Toshiba British Intelligence: Spying...for You. Were you satirizing something specific that's happening in England right now that maybe we're not hearing about over here?

Yes, you might be right though it's hard to say. I'm probably about as aware of what's happening on a day-to-day basis in America as you all are of us in England. But I think we're aware of the sort of terrible health and safety corporate stranglehold, but we were also looking at the older kind of spy culture—not just fiction but in actual history—and there's a kind of projected image of looseness, a kind of devil-may-care attitude which is squashed by an inordinate number of rules. And a corporate entity concerned with the bottom line seemed an appropriate setting to explore that.

There's also the state of the British economy. The emphasis on economic austerity kind of comes to mind: "We'll get corporate sponsorship to pay for wetwork!"

Exactly, and yet make sure it still sells well, the slogan from the film "Spying...for you" and all that. We actually went further with the whole satirical tone of the story, there's more of a buildup, we showed him as even more of a dinosaur, and even more of what you see with Toshiba British Intelligence, but it took too long to get to the story. An early cut was closer to two hours, so we ended up cutting a lot of it. We took out some quite funny bits, but in the end I think the more we got into it and tried to refine the jokes, the 100 minute mark seemed the right length.

Rowan has mentioned Bourne being more of an American archetype versus James Bond. Do you think there's a noticeable difference culturally, that Bourne represents a very American aesthetic while Bond is more specifically English?

I think they do represent different worlds. Ian Fleming's creation is very much post-war, even post-empire if you will. The old suits are still very much in fashion and Britain is looking at the world very differently than perhaps it does now. Of course, the suavity is hugely important, the spy as a diplomat, so to speak. That ethos has been pushed out. On the other hand, the American approach is shown in Bourne, an emphasis on more direct action, the spy being an extension of a policy more than we saw with Bond. I love the Bourne movies by the way, the toughness and examined political themes, and I think the new Bond has done well to borrow some of that. You do feel like Daniel Craig has successfully merged the two worlds.

Johnny English is obviously going to be compared to Austin Powers, you've mentioned drawing inspiration from Roger Moore's Bond. Were there any specific works of spy fiction you were looking at, that you saw as influencing the way you approached the movie?

I would say the Bond movies, certainly. Austin Powers not really, they're much more pastichey—I think some of them were genius of course, but we wanted Johnny English Reborn to be its own story without relying too much on pastiche. Certainly I was thinking of Goldfinger in a couple of places, and I did look at various other works, the Bourne films definitely influenced a couple of the heavier action scenes. But to answer your question more specifically, nothing in particular, though of course I was inspired by multiple sources. I wanted to make sure it wasn't too much a reference film.

The first film had I think a handful of cracking jokes, but I think the real funny is to try to achieve a real kind of comedy thriller. That's something we used to have more of, certainly back in the '70s, though nowadays they seem to cancel each other out. That was certainly Rowen's vision for the film. He mentioned room to breathe and I think that is important-that heavy emphasis on action can interfere with the joke. But I think also as long as you know which buttons you're pushing, you can go further into the action thriller a bit, play around with the story.

Well, to put Johnny English in more danger, actually convincingly make his survival a question. It helps in other ways, too. It's kind of hard to convincingly portray a comedic lead as having a relationship with the Bond girl. You need to create a frame in which it makes sense, as I think we managed here.

How did you balance Rowan's comedic style with that?

It's a thing where you can't quite go hell for leather, because you have to cut back to that face, Rowan's face. It really is like Chaplin, you need to give him a moment.

Definitely, and quite honestly there are moments, like the pneumatic chair scene where I was reminded of Peter Sellers, that deadpan total commitment. In fact, I had a conversation about this with my wife and we both agree he'd make an absolutely brilliant Don Quixote, who's somewhere between Black Adder and Johnny English. He's one of those chaps that when he sees the point of something, he'll just work and work at it.

Rowen is deadly serious about his work and he's got deep sensitivity as an actor. It's quite fascinating working with him, he's not leaning toward a comic get-out. He can't do it unless he actually believes it, and I really like that about him and I'd love to work with him again.