close
INTERVIEW: For the release of Fast Five on Blu-Ray, the director chats about all three of his sequels.

Justin Lin Looks Back on His 'Fast and Furious' Experiences 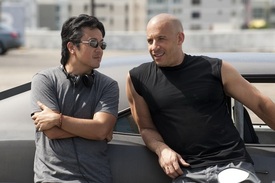 When Universal Pictures gave Justin Lin directing duties on the third Fast and the Furious movie, Tokyo Drift, it seemed like the studio was pawning off a waning franchise on a fledgling UCLA film school grad who'd charged his first films on his credit card in the hopes that—at best—he'd successfully shepherd it onto the direct-to-video market. Instead, Lin turned the film into a minor hit, resuscitated the franchise, and became its visionary. Since then, he's directed the fourth and fifth installments, Fast & Furious and Fast Five, the latter of which became the most successful film in the series as well as one of the biggest films of 2011. With Fast Five arriving on Blu-ray this week, audiences have another chance to dig pedal-to-the-metal thrills, and Boxoffice caught up with Lin recently via telephone to talk about the renewed vigor with which he attacked this latest installment, a few of the shortcomings of its predecessors, and how the learning process contributed to his growth as a filmmaker.

Fast Five was possessed of even more energy and enthusiasm than its predecessors. What lit the fire in your belly that made this the biggest and most spectacular film in the series?

Well, when I took over on Fast and Furious: Tokyo Drift, there was no stars, and they were going to kind of try to move it. I was just coming from the indie world doing credit card movies, and I remember having this conversation about Fast and Furious. There was a script there and I felt like if we were going to kind of potentially take on this franchise, there were a couple of things that would be exciting. One was really changing the sensibility of it, and the other one was that if people embraced it, we would be able to evolve it, and to not be conservative and go back to saying, "Oh, it worked on the first one, so let's keep doing the same thing." And to the studio's credit, they really were my partner on it, and they agreed to go and do it. So it was kind of a plan that if we were able to earn another film, then we were going to be able to grow it and embrace it. And I think the third film was kind of an exercise of really trying to change the sensibility, change the culture of the franchise, and that seemed to be embraced and it gave us a chance to do the fourth one. And it was successful enough that the original cast was excited, so we were able to kind of bring them back, but not bring them back as characters from six or eight years ago—we were able to acknowledge their maturity and how they evolved.

So for me, it was fun because I was able to even design stylistically and embrace that also, so when people embraced the fourth one, we had planted seeds for the fifth one. I think that's something that I personally find very rewarding, to be able to earn this, and now that people are embracing this, we've planted seeds for this to go on, and when Vin Diesel came back on the fourth one, we were talking about if we were lucky enough, to make it into a trilogy starting with the fourth one. So really that was the approach, and it's been a lot of fun to be able to travel with the film and to watch it with people around the world.

Everyone in the series came back for the fifth installment and you added Dwayne Johnson. How tough was it to find enough for everyone to do in the film?

I think that I wanted to create a healthy environment—that was my challenge. And I am the director, and that was a relationship that a lot of us had. Even for Tyrese, I hadn't worked with him in this franchise, but I had worked with him on another film [Annapolis, with James Franco], so I think there was already a trust that had already been established. And I feel fortunate because all I told them from the beginning was that I wanted them to bring their A-game—and I'm bringing my A-game—and the challenge of this is that you are trying to take care of nine characters and making sure that they have an arc. I come from team sports and I love basketball and that was my approach to it. I told everyone, "Look, bring your A-game, be competitive, and you can challenge anything. But, if you're trying to serve yourself, then I'm going to have a f--king problem." And I was very honest about that, and some of those conversations were tough way before we shot, but I think everybody got the tone, so they showed up with trust and they wanted just to really contribute. And it became a lot of fun.

There's not enough real estate for all of the characters, and I'm trying really hard to make sure that I respect everybody and I respect where they're going. So I think those meetings upfront were good, because it was a challenge for me to make sure that even if it wasn't on the page, that I had to make sure that all of these characters were taken care of. And I love that. I mean, that's the part of the job I love. I don't like showing up on set and just letting people read lines—I want to make sure that they have somewhere to go, and that's kind of great for me because it brought me closer to my indie roots, you know? And I want to be able to approach everything like that. And I know on the other Fast and Furious movies, the crew usually has a lot of fun with me, because I'm usually working with Thug #2 and giving him a huge backstory, so it was actually a lot more fun doing that with these characters, because they all are very relevant in this universe and in the franchise. And to be able to take that kind of care, I felt like it was important—not only for them or for the film, but for the fans, the people who are going to pay tickets to come see this movie.

One of the reasons I think the fourth film suffered a little bit was because the writers conceived sequences that were impossible to realize practically. What went into conceiving and executing the set pieces in Five in real locations?

Here's the thing: it's funny you say that and you're totally right. When I came on the third one, I felt like I wanted to respect people who love cars and car movies, and part of that is when you look at the classics like Bullitt and stuff, they're all done practically. So that was the approach on Tokyo Drift, and on the fourth one, there were a lot of issues that came up. And it's funny, because if you look at all of the car stuff in the fourth one, they were all done practically. Actually, we built a tunnel in San Pedro, and we were doing all of the stunts for real, so there was no CG work. But the problem was environmental, and there were a lot of other problems that I learned. And I'm the director and I'm accountable at the end of the day, and we conceived this idea and we loved the tunnel. But when we went scouting, we went all of the way down to Mexico and we were looking at a lot of towns that had tunnels, it just became impossible, just physically, to shoot in the tunnel. And also the fumes. There were just so many issues that we had to build our own tunnel—and that was a good lesson. Because no matter what, even though that was totally done practically and we built the tunnel around it, I think that consciously, as the audience, you know. And that was a big reason why I came back for the fifth one.

I'm proud of the stuff that we did on the fourth one, but at the same time, there were a lot of things that happened that I wasn't happy with. I feel like when you do films of this budget, you get a buffet of elements, and how you apply those elements defines the movie. And for me, I don't know until we did it. When we did the tunnel tests, it was great—but we did three shots. And then when we came to reality, it was very difficult. And we built the world's longest man-made set to do the tunnel stuff, so it was not for lack of effort. But I agree with you, and I think at the end of the day, when I look at the stuff in this film, I think there's just something about when you take practical cars and put them into another environment, even though the articulation of the cars will be real, there's still something about the subconscious. And I was very hard on myself about that, but fortunately people embraced it—if you look at the ticket sales and the reaction to the fourth one, people still embraced it, so I felt very fortunate because I felt like that gave us another chance. And if I was going to have another chance, I was going to use the buffet of elements very differently.

And that's part of my growth. Going from a credit card movie into a franchise, there was a little bit of growing pains for me personally, and that's something that I feel like I've been able to correct. And that's not just CG elements, it's also changing the culture and making sure that I've been able to have the full experience and I've been able to build a team now that we've been growing together. So Fast Five is a culmination of a lot of mistakes and maybe personnel and stuff like that that didn't quite make sense for me, and the culmination of bringing all of these elements that I learned, that I want to work with, and people want to show up to see, and I think it was the best example of teamwork. And that gets me excited, because whatever films I do after Fast Five, I feel like my team is now going to get stronger and stronger.