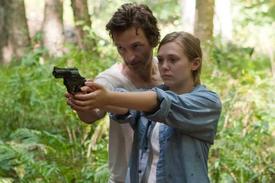 Last year, everyone joined the cult of John Hawkes when the Winter's Bone actor became the dark horse in the 2010 Best Supporting Actor Oscar race. (Christian Bale took the win.) This year in Martha Marcy May Marlene, Hawkes is at the head of a new cult as Patrick, the leader of a dozen hippie kids trying to carve out a new way of life in upstate New York, one that eventually includes robbing, murdering and sexually succumbing on his command. How did such a nice guy become the face of evil? Explains Hawkes, he thinks of Patrick as an alien, not a villain—and whatever you do, don't say the word "cult." Oops.

Because of the character you're playing, you've become this font of wisdom where people want to ask you all these questions about cults as though now you're the expert.

Yeah. Does that get under your skin, to be so tied to this dark world which people want to ask you about about all day, every day?

It's odd. It's lucky that this is a film that I really love. The only other really, really, really heavy press tour I've done in the past was for Winter's Bone last year and I loved that movie so much and this one, too. As difficult as it is to talk about yourself, it's interesting to talk about a project that you care about a lot. And if this talk we're having now and the ones I've had and will have bring more people to see the film somehow, then it'll be worth it. It's something I believe in. But I don't know that much about cults and it's pretty evident and I don't ever profess to in these interviews. In fact, I avoided finding out about it because I never wanted to think about it as a cult. It's just too loaded a term, it has too much preconceived notions surrounding it.

You've said that it was important to you that the word "cult" was never used in the script. Does your character, this leader, even think of his group as a cult or does he see it as something positive?

I don't think he would necessarily use that word. I think he would think it was demeaning and beneath their group and its sensibility. There's a lot of things gone from the script and with good reason. I don't lament that at all, but there's a lot of more specifics about the group gone: how Patrick addressed the group over meals, a little more of their philosophy—although even that was not really pinpointed and seemed like it wasn't important in the story. It's really about her [star Elizabeth Olsen's character]. It could be any kind of trauma, ultimately. In this case, it happened to be a community that was abusive and did some pretty horrible things that she found herself a part of and wanted to get away from.

We look at figures like yours as masterminds who know what they're doing. But could also be true that they're finding their way through it as they go, and they don't know where they're ending up.

Sean [Durkin, writer/director] was saying he had backstories for everybody, but was he a lonely person too?

I put some thought into that. Normally, it's a very different film for me as an actor. Normally, I over-prepare something to death and try to completely forget about it when the camera rolls. But all of that is still inside of you and accessible maybe to your subconscious even at times. I just want to be present with the other actors and not thinking about my preconceptions when the camera's rolling.

I had a backstory for him. I could probably try to recall it. It makes the movie less interesting in a way. I know Sean Durkin is famous for not really talking about what's not on screen and I do respect that a little bit. I have no mandate not to talk about that by any means. It's just my choice. I prefer to think of him as someone who fell from space and landed there. Not like he's an alien, but just that I liked him having no beginning and no end. Just there for the present.

I'm just so interested in the idea that people can become dangerous figures without them even knowing it's happening to them. And a lot of the time, like here, they start out as utopians.

Yeah, it's part of our country and our country's history as well. It deals with what the kind of freedom to live that way and make those choices about how to live. I often wonder how clearly he sees himself. That was an interesting question almost in retrospect, to wonder what he would see when he looked in his mirror in his soul's darkest hour. Has he b.s.-ed himself to the point where he sees nothing but good? Or is there a piece of him that's just a twisted lonely little man?

One dynamic we don't see much of in the film is the hold he has over the men in the group.

There's the scene where he asks Martha May to shoot one of those guys and the guy's pretty emasculated by the whole thing. But one thing that fascinated me a lot in watching the movie and initially when I read the script was this illusion of choice for the members. Like the very frightening scene that begins the movie when Brady Corbet's character shows up and finds Lizzy's escaped character, Martha, at a diner, but doesn't shove her in a windowless van. The idea that you're free to come and go as you please almost seems to keep people closer than an idea of being kidnapped and held.

Boundaries give people a goal. Like, "You won't let me smash through that? Now I want to."

Exactly. It's human nature. If you're an astute study of human nature, you can put those things into your use.

And that's what an actor does.

You were in a punk band called Meat Joy in the '80s. Did you draw on that for your acoustic performance?

Sure, the fact that I played guitar helped a lot. It's a really exciting moment in the film. I've played music in movies and played musicians in movies, even had songs placed in movies and television shows. But to actually score a film live even for a few moments was thrilling. Sean's idea was not to go into a studio and prerecord the song and then pretend to play to it. That would be how 99 percent of films would work.

He always saw music in this film somewhere. And in the script I think it says, "Patrick plays a song." And that's all that's there. I'm not sure if he'd have cast a non-musician in the role, if that would've changed. I just know that somewhere, someone would have played music in that community. That's how Sean saw it. They had no television or radio or things like that. So they would make their own entertainment. And anywhere you go, you walk on any film set, you're going to see someone on a break playing an instrument. But the idea to do it live—we did three takes, but we could only choose one take. There was no way to edit and cut between the takes because they're all going to be at slightly different tempos, played with slightly different intensities. It was really thrilling. It was a challenging, but a really, really cool thing to, in essence, score the thing live.

100 percent, very much so. Rather than playing the song in a studio and just regurgitating it and lip-syncing as the cameras roll, the way that a normal movie would do it, to do that live, and to look around and see that people, as I played—particularly to look into Lizzy Olsen's character, Martha's eyes—while I'm singing this song, really gave it a little lift for sure.

You have a lot of charisma as the leader, but that's a compliment that seems to make you uncomfortable.

Yeah, it's such a slippery word, really. I don't know how you play at being charismatic. It's certainly not in my makeup as a person. People we look at and find charismatic are usually people who have a goal that they're actively seeking. Finding that goal seemed to be enough.

There were things your character said—"You're a leader and a teacher and nobody's ever known it"—that, in a different context, are actually great.

Certainly. It's a really wonderful philosophy. It's just bent enough to be dangerous. I think that governments have done that kind of thing over time.

I can't think of anything that's managed to stay in a straight line toward its goals.

That's very true. But the quality it takes to manage that group and keeps them focused is almost something you'd want to see in a great high school teacher.

For sure. Under different circumstances, he may have been a very positive contribution to the world around him. In this case, not so much. Obviously, the selfishness, the joy of control and of power that doesn't work toward the common good.

I thought it was interesting that there wasn't a larger role of some sort of rule-based religion.

Perhaps originally. One of the only things Sean asked me to do when I was kind of looking for anything and I said, "Should I research? Should I read books?" he said no. And I thought that was a great idea. I wanted to make my own way. But he asked me to read Siddhartha, which was interesting to reread in my case. And there were a number of fairly long diatribes and discussions over the dinner table or one-way discussions in those dinner scenes that are gone that dealt with Buddhism, which is a lot opposite. It being one of the less violent religions and one of the more positive, accepting religions made it really interesting. That stuff isn't in the film anymore, and it doesn't need to be by any means. But I don't know that there's really a manifesto or a definite kind of tract that he cleaves to throughout and teaches people. I think that he wants them to think for themselves-but only enough to feel that they're free.

Now that you bring up the Siddhartha thing, you almost do hear that in the speech he gives about why death doesn't matter.

That's true. There's truth in that speech too. Sean Durkin did such a lovely job writing and directing the film to find duality and find opposites. Certainly I searched for that and found that everywhere that I could in this character. Because no human being is just one thing. And it's not interesting or exciting to me to play one value. Dynamics and change are part of nature and part of the world and something we need in our stories, and this character was no different.