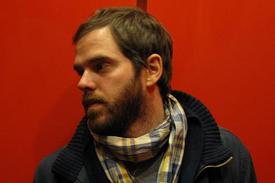 If you're a first-time filmmaker looking to make a cult hit, why not start—literally—with cults? NYU film school grad Sean Durkin, a secretive, shy 29-year-old, wanted to make a character study with a twist. Meet his final project: Martha Marcy May Marlene, a hushed, paranoiac drama that starts when Martha (Elizabeth Olsen, sister of Mary-Kate and Ashley, in a powerful debut) escapes from a farm and flees to her posh sister's lake house. In flashbacks, we discover what she's running from: a utopia gone wrong helmed by a leader named Patrick (John Hawkes) with a calm, confident and sexual hold over his charges. But Durkin wasn't interested in shooting exploitation camp—every frame of MMMM is restrained, patiently waiting for the audience to come to it before grabbing them in a chokehold. At Sundance, Fox Searchlight snatched it up and is clearly plotting a major awards bid for this newbie sensation. Durkin sat down with Boxoffice to walk us through the creation of a cult follower, and why the true stories he uncovered are even bleaker than his fiction.

You did a lot of research for this, but how did you start? The world of cults is big and underground and a little dangerous.

If I say "cult," what's the first thing you think of?

I'm from Texas, so I think David Koresh.

That's it. Yeah, David Koresh and Jim Jones and Charles Manson. You know what I mean?

You start with the big stories?

Yeah, you start with the big ones and then you go from there. The thing that was amazing while looking at different groups was that it's all the same tactics. It kinda exposes these guys, these people you look up to. And the ways they treat them like God, the way that they use the exact same tactics over and over. These guys are so generic.

That's what I don't get: if it's the same thing, how does it keep happening?

It's just masked in different ways. I feel like it always starts with some simple and pure idea that someone's belonging to something, and that what they're belonging to, what they're joining, is meaningful and like-minded. People are looking for something and they find this group that might be like-minded.

If the leaders are all sort of fundamentally the same, what about the followers?

It's really tricky to talk about this stuff and start like classifying them. Because one of the things that I was really attracted to is that there's no set story of how people can get involved. There's no set type of person. I mean, you think you can start drawing comparisons with runaway girls from abusive homes, and then you hear a bunch of stories about Ivy League graduates from wealthy families.

But what about a weird sort of, I don't know, boredom or disenfranchisement? Something empty that cuts across everybody.

Yeah. I guess that's probably some thing, but I've also seen where people aren't like that and are very strong people and live their lives, jobs and families. And then they meet someone and that person makes them feel that way. So that's why they follow, you know? So it's not even like they're all starting in that place. It's very confusing and very complicated and that's what I was drawn to. It's like, "How do I try to do that and not simplify it?" That's why there's not a lot of information about Martha and Martha's past and Martha's family because I didn't want to create any reasons like, "This is why..."

Because people will be watching it looking for answers.

Yeah. All I wanted to do was to give enough story that you had enough of a sense that these sisters were sort of left to maybe take care of each other.

But for yourself, do you know what Martha was like when she was 16?

I know everything about all of their lives. [Laughs] But I don't share any of it. I mean, I've made myself available to share it with the actors if they want to know, and sometimes it's helpful. Sometimes it's not.

Does that mean you see a future where things might have turned out a little better?

It's funny that you ask that question. For Martha? Like how she made other choices in her life? Well I think everyone's life can be different by the choices they make.

The people in her cult might look at her sister's [Sarah Paulson] upper middle class life and say, "That's a cult."

Totally. They would say that they're worshiping money and objects. It's its own religion.

Absolutely. After almost every screening, or whenever I would talk to people about the film I was making, I would hear these stories: my sister was in a cult, my friend was in a cult. There aren't exact numbers, but the number is definitely larger than people expect.

But you also softened some things. Like you'd said that the sexual initiations we see in the movie are actually way worse in reality.

They are. I decided I had to scale them back because if I showed how awful things really are, it would change the movie—it would make it this horror film when what I wanted to focus on was just the character study of a girl who goes into this world and then tries to leave. But the true stories are so much worse than what you see in the film, which was calm and had these nice white robes.

The most horrible part of it was the way that afterwards, the women tell the new girls that they're wrong to be upset about it.

That's exactly it. It's all how the breakdown works. I kept hearing that story again and again that that's how the women in the group who really turn the new girls on their heads by telling them that it's an honor, that their feelings about it aren't right. That's when people's inner compasses get flipped and they start to try to adjust to a system that's upside-down. And they learn that they can't complain.

In researching the film, have you learned how to become a cult leader yourself?

[Laughs] I've learned a few things. I don't know how good I would be.

I mean, just in case the filmmaking thing doesn't work out, you can hole up on a farm somewhere and start a new career.