close
INTERVIEW: The actor chats about the effort it takes to be invisible and working with Gosling and Clooney

Max Minghella On Trying To Disappear Inside 'The Ides of March' 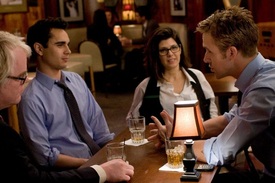 Max Minghella claims he never wanted to be an actor, a pledge you have to take with a pound of salt. After all, when your dad is Academy Award-winning director Anthony Minghella (The English Patient), you're born with sharp and handsome good looks, and his friends cast you in their shorts when you're just 12 years old, you'd have to fight not to go Hollywood. Still, Minghella insists, "I thought it was sort of embarrassing to say you wanted to be an actor—it was, like, uncool." The British schoolboy managed to hold out until he was 20. Then he succumbed to his destiny, racking up roles in Bee Season, Syriana and Art School Confidential in his first year on the job. But it was his Social Network role as the litigious Diyva Narendra—the Winkleviis' partner and Mark Zuckerberg's Public Enemy #3—that made Minghella the go-to guy for brainiac social climbers, just like his latest gig as aspiring politico Ben Harper in The Ides of March. Minghella tells Boxoffice how hard it was to play a role where he must fade into the background like a spider waiting for his moment to pounce, and warns us that when George Clooney is around, you have to watch your pants.

You're making a little name making these really kind of show-stopping small roles. Is this an agenda?

No, it's not an agenda at all.

You don't know how people are going to react to something. You have no idea.

You really don't. Even something like this, you don't know how people are gonna react to it. There's a lot of people who watch this film and want to hate it because the people involved—everyone in it is so established and successful that it can feel a bit sort of selfish.

While watching the film, I started to characterize the roles as chess pieces.

I associated you with the knight. You had a character who was really entrenched in the middle and then all of a sudden had mobility.

You thought about it too much. [Laughs] I really felt like I was there to serve the story and be a part of the architecture of this environment. And so I wanted to be invisible. That was sort of my characterization: try to be, to disappear into this world—I mean, there's a lot of scenes where something really important is happening and I'm the one person in the room who's on the computer, so you want to be careful that you're not distracting, that you're not detracting from what is really important about the scene. And so to me, it was all sort of about the study of being as organic as possible in that world and believable enough in that world that I could disappear into it. And that was actually quite difficult and an interesting challenge.

It was really high maintenance. It requires a different kind of concentration of just stillness and calmness. I wanted to always seem very relaxed in that environment. But it does take a lot of energy. It was interesting how much energy it took. I thought it would be simpler than it was.

The scene where you stand out the most is when you're typing while people are having their showdown in the hotel room. The audience's attention knows that there's something happening right over here that we're not meant to pay attention to. That's tense.

I thought George had a reason for it, to keep sticking me in these dramatic scenes that I wasn't involved in. I think it's also to create a consistency in the environment, like, "Okay, this is all one world." It works almost like a sort of decoration. We're in a war room.

What's the real story with your character's relationship with the Evan Rachel Wood character?

I think he's sort of in love with her but never did anything about it. I don't know. I didn't think about that too much. I probably should have because this is a very exposing interview.

Everybody's got their process—

I know we had a party. I know that Evan was at a party in my room and in Evan's room, there were a lot of photographs of us together, like, hanging out. And I didn't get the impression from those photographs that if there was any kind of romantic implication, I don't think she would have those kind of pictures on the wall. So my interpretation was that we had a platonic relationship, but that I went straight to her room to show off indicated to me that I probably wanted her to be excited.

This is a film where motivations are driven by strategy, not naturally occurring human reactions.

This was an amazing cast.

Sometimes you do a junket after a movie and they're like, "Oh, what did you learn?" I've been really lucky with the actors I've worked with so normally a question I hear: "What did you learn in your experience? Was it educational?" And I don't know if it always is. Like, I don't know if you always learn something about your craft necessarily by really doing this. I feel like I'm a different actor having done this movie than I would have been had I not done it, just from being able to watch these insanely talented people.

I think because they're really good. They're all really good and I worked with a lot of great people on this movie. I got to be in a room with a lot of different amazing actors who all have very different techniques. And that was very useful. Ryan [Gosling] is a very useful person to work with as an actor. I mean, Ryan's the best, right? He's the best actor. He's the best guy to watch. There's something amazing to watching Ryan on screen.

He just has a slightness to him that he knows how to use.

What about working with George Clooney?

I think he's naturally very good at commanding authority-getting people to revere and be on his side is almost a political talent. You just want to make him happy.

He has that effect on everybody. In a good way. And I think he's got a crew who in turn respects him and wants to be there for him. It was a surprisingly focused environment, I'd have to say.

Still, did anything funny happen on this serious set?

It wasn't, like, the wackiest set. But George would do this thing where you'd be getting a serious note and you'd think it was really important and special because you'd have this long dialogue about this scene and the character, and then you'd look down and you'd see him spraying water all over your crotch to make it look like you pissed yourself. It was an elaborate show to embarrass you. He does that a lot.