close
OPINION: The Shatner-directed documentary about the actors of 'Star Trek' doesn't suck. But lord is the man insecure.

'Star Trek' And William Shatner's Ego: 5 Reasons To Watch 'The Captains'... For People Who Don't Like Star Trek 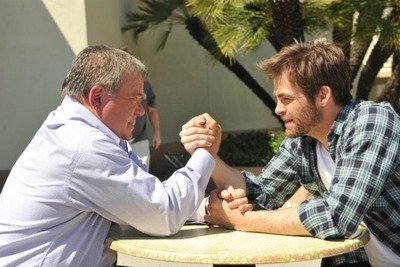 "I like Captain Kirk. I can't say that I'm very fond of Bill." - supposedly said by James Doohan ("Scotty" from Star Trek) about William Shatner.

Poor William Shatner. He's like a kind of science fiction Michael Jackson, forever trapped in a body he didn't want and incapable of escaping it without severe disfigurement, to his career, anyway. Shatner notoriously hated his association with the role of Captain James T. Kirk, especially during his 1970s career nadir when he was reduced to dinner theater and guest spots on schlocky TV shows to get by. When his career was finally revived in the 80s, it was due to the renewed popularity of Star Trek, and one can't help but think that Shatner deeply resents that fact.

His resentment is all-but confirmed in his surprisingly good upcoming documentary The Captains, which he also directed. Billed as a conversation between Shatner and the actors who have also played Starfleet Captains in a Star Trek franchise, it might better be described as 'egomaniac William Shatner deals frankly with his place in popular culture'. Over the course of the film, he sits down with the 5 other captains (Kate Mulgrew, Patrick Stewart, Avery Brooks, Chris Pine and Scott Bakula) ostensibly to discuss their experiences in the franchise and how it affected their careers, but ultimately to talk about Shatner's experiences. Their conversations are interlaced with scenes from an appearance Shatner made while filming The Captains at a large Star Trek convention, that serves to underscore his ambivalence with his bitch-goddess cash cow.

The Captains doesn't touch on the gossipy aspects of Shatner's relationship to Star Trek. His legendary alienation from his fellow cast members, exemplified by the quote at the top of the post, isn't mentioned, nor does it go into the trivia of the various series. The Captains assumes the viewer is perfectly aware of who is involved and that allows it to get right down to business rather briskly. The talks with the other Trek captains are notable for astonishing frankness, particularly with Patrick Stewart. Better for the viewer, thanks to some rather shameless pandering to Shatner's self esteem, they're a window into Shatner's difficulty coming to grips with his career. That he kind of does by the end might have been a scripted moment, but nonetheless it was a touching look at the career of a man who will best be remembered as the idol of millions for a role he despised.

But enough about all that. I obviously think people should see the film. But knowing what I know about people who don't see the words "Star Trek" and think "ooooh I want to watch that", it's necessary to make a better pitch than 'YAY TRek!". With that in mind, here are the 5 best reasons to see William Shatner's  The Captains, if you're not a Star Trek fan.

5) Avery Brooks and William Shatner awkward Jazz improv. The Man Called Hawk who portrayed Captain Sisko in Deep Space Nine wants you to think he's a crazy Bohemian Jazz man. And he might be! But he's also apparently baked like fudge brownies during his conversations with the Shatner. I'm not saying that he actually was high. But he sure giggled an awful lot, and somehow ended up in a weird improv duet with Bill. And who doesn't like possibly pot-influenced senior citizen jazz?

4) Patrick Stewart; Just, Patrick Stewart. Everyone likes Patrick Stewart, but after seeing him ruefully admit to Shatner that his life on the stage or in front of the camera always seemed more real to him than his actual life, you'll love him.

3) Chris Pine's awesome beard. I am not kidding. Some people are just born to have facial hair. He's one of them, and if his interview with Shatner wasn't very illuminating, at least he looked good not being so.

2) William Shatner's serious discomfort with actual Star Trek fans. He's not a dick in any way, but if you've ever wanted to see someone talk to their fans the way I talk to my pet cat, now's your chance. Bonus: You also get a sense of the bewilderment actors probably feel about extremely devoted fans.

1) William Shatner upstaged by Patrick Stewart. In one scene, Shatner is delivering a rather tepid comical speech to fans at a Start Trek convention about the in-progress film. As he begins to mention Patrick Stewart, Patrick runs out on stage and the audience goes absolutely ballistic. Obviously the moment was planned in advance, but compare the audience's reaction to Shatner's emergence on stage to the way they respond to Stewart. Props to Shatner for showing it anyway, and ouch.