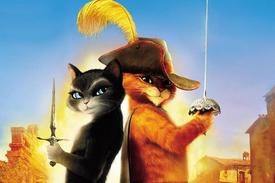 Inheriting a franchise can be a tricky, but Chris Miller makes it look easy: in 2007, he directed Shrek the Third, and now releases his follow-up, Puss in Boots, which steals Shrek's feline companion for his own new film series with an epic origin story that easily stands on its own. Boxoffice sat down with Miller at the recent Los Angeles press day for Puss in Boots, where the filmmaker talked about the freedom he had in exploring a pre-Shrek world and why he decided to scrap the pop culture jokes for his cat crazy spin-off.

Unlike in Shrek the Third, you're not just inheriting a cast of characters and a world that's already defined.

Yeah, Shrek The Third was interesting in that way, when you just talked about "inheriting" the two very successful films before it. And those first two movies had managed to gather and collect dozens of characters that we had to deal with. That was daunting, and what I took from that, or at least the opportunity I saw when Puss in Boots came up, was it just felt like a totally liberating process. It was just like, everything, everything I'm going to need on this film is going to be informed by this character—and he's a very bold, a very colorful larger-than-life figure. He's got all of this crazy history, so you can really, honestly assume, "Okay, so he's seen it all and done it all," and knowing that informed the world that he was going to live in. It was going to be an epic origin story, and it was freeing in every way—just the style of filmmaking, it was going to be a lot more active camera. It was going to be high adventure, and the only thing it's going to need—and once again, I think the character sort of tells you this—is that this is a guy that takes himself very seriously. He's melodramatic, and Antonio Banderas can play that so well, which I actually think feeds comedy into the film. But what we're going to need is a really dramatic story for him, give him something at the beginning of the movie that he loses, something that he's going to have to spend the rest of the film regaining. So we knew that would make it a redemption tale: put him on the run, make him a fugitive, and everything came from that. So suddenly we're pairing him with Humpty Dumpty as an orphan now, so it's a brotherhood story at its core that turns into a betrayal tale that becomes a revenge story. And all of these like heavy elements, I love. I actually think that's what makes the film special, and all of those elements are sort of redeemed at the end.

Other than Puss himself, what guidelines did you have to adhere to for this to fit into the Shrek timeline?

Well, we knew it was a prequel, which gave us freedom. I don't know if it takes place ten years before he meets Shrek or five weeks—it's timeless in that way. And obviously we're plucking him out of that Shrekian universe, but we want to make sure that this is going to be his world, which is sort of if anything, this southern-European fairy tale landscape. It's Latin in flavor. And then the other big influences were sort of cinematic, but character-based. There's this legendary feel to the film. It's the legend of Puss in Boots, so I think we borrowed, or we've been inspired—I should say by Sergio Leone films a little bit—but probably the Clint Eastwood part of it even more than the actual spaghetti westerns themselves, you know. There's a little bit of James Bond in this character, there's some Errol Flynn, and Zorro, so he's sort of like classic cinematic screen legends. It really just helped sort of bolster the movie, and the size and scope of it.

One of the things that really stood out was the use of multiple panels in several sequences. How did you come up with that as a stylistic flourish for the film?

I have to say that idea came from a story artist of ours, Bob Logan. I love our writer—Tom Wheeler did a great job on the film—but I just feel like 90 percent of the things that are memorable in that movie came from the story department, in terms of everything from concepts to dialogue. And that was something that Bob pitched us and it just felt like that feels like it fits in our world. It's a nice opportunity to do something different with the format. And then, I think Bob did that same thing later with the crows, which is a great way to sort of put a button on the split-screen stuff, when the crow comes back and he just chases the second panel away and chases away the bird. But we had a great story team, and we all just sort of got on board with the tone of the movie and just ran with it.

The movie is incredibly cinematic. The dance-off alone is pretty amazing in terms of camera placement.

It's really tricky, and we consciously tried to keep the dance-off scene pretty static at the beginning, knowing that when they started dancing the camera was going to start to come to life, and we were going to be moving around a lot. And we spent a lot of time working it out, because it was very easy to become very disoriented, and just understanding the geography of that place. So we actually had a choreographer come in, Laura Gorenstein Miller, and she was great, and her dancers were wonderful. And we mo-capped her choreography—we didn't actually use motion capture in the movie, but just for camerawork, it was invaluable to feel our way through the scene because we knew we were going to use big, sweeping cameras. So that came in really handy, but you can't wear an audience down, just visually, too, so we were always trying to be really mindful knowing, especially in the first 20 minutes of the film, that that's probably the most visually-dynamic thing that happens. We knew that once we got into the second act, there was the stagecoach heist, and this insane beanstalk-growing scene, and we were really just trying to temper ourselves a little bit just so we didn't give the audience total fatigue.

Were there any moments where you had to redesign a sequence because once you added 3D, it was no longer feasible to cut or move in a certain way?

Sometimes, yeah. But I have to say for the most part, it worked out for us. We didn't have to, but sometimes you have to restage things just based on that, or especially when you're in 3D, the trickiest part of it is frankly having a cut that's long enough. When you cut just for 2D, your cuts can be a lot faster, but the adjustment the eye has to make to figure out the depth of any particular shot, you usually have to open those shots up a bit. But for the most part, Gil Zimmerman, who shot Puss In Boots, was also the cinematographer on How To Train Your Dragon, which for me, next to Avatar, I just feel like that's the benchmark for the use of the format. And Gil worked with Roger Deakins on that film, which had a huge influence on Gil, and Phil McNally is sort of our 3D specialist at Dreamworks, and both of those guys worked on Puss in Boots. And I feel like they brought so much knowledge that we didn't feel backed into a corner often at all. He knew how to approach a lot of the staging so we didn't get nabbed or have to redo anything too often.

One of the hallmarks of DreamWorks animated movies is jokes based on pop culture or contemporary events. Not so much here.

Yeah, I consciously tried to steer away from that. To me, sometimes those moments work and they're great, and they're integrated well. But they tend to snap me out of a story, and they can get a little vaudevillian at times. So we were just really conscious about, "Okay, in this film, all jokes are going to come from character and from situations." And we really tried to concentrate on that, and there are a few times when it's going to leak through—like a Tuesday Night Dance Fight is fairly contemporary, now that I think about it, but I think it's okay.

But it isn't like you did a So You Think You Can Dance fight joke.

What was the theme that, to you, unified all of characters and action in the movie?

I guess the unifying theme, especially with the main three characters of Puss and Kitty and Humpty, is that it's never too late to do the right thing. And it's Puss that gives that to both of those other characters. If you look at Puss in Boots in this film from a character standpoint of character growth, he is clearing his name and he's determined to do that. And he's got a lot of loyalty and a huge heart and a lot of drive, but he doesn't really change at all in this picture. I mean, he effects change in all of the characters around him, by will of his nature, and I think that's what he delivers to everyone he encounters: that it's never too late to do the right thing.