close
INTERVIEW: Also chats about the art of acting unfunny and a little about Prometheus 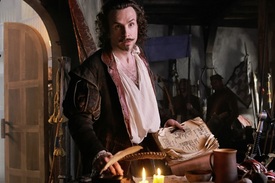 Rafe Spall, alumnus of the Edgar Wright school of modern comedy, has a gift for playing dumb. It's fine—and funny—when the joke's on him, say in One Day where he romanced Anne Hathaway with jokes so painfully dumb we almost understood why she pined for that cad Jim Sturgess. But he's about to make literary types gasp with his riotous interpretation of Shakespeare as an illiterate, greedy fool. Truthful? Maybe. Terrifically funny? Damned straight. And as Spall insists, the Bard would applaud his performance. (Still, good thing he's been dead for 400 years.)

For people who think of Shakespeare as an unassailable genius, yours comes as a bit of a shock.

Yeah, it does. And that was the biggest draw for me in playing this part: we wanted to confound everybody in what they expected Shakespeare to be. So, as so much as we wanted him to look exactly like Shakespeare, because everyone has an image of Shakespeare in their mind—rather like they start with an image of the little beard, and then the high hairline and that sort of thing—we wanted him to really look like that, but then in the playing of him, be completely different. So my Shakespeare is a lying, cheating, womanizing, drunk actor. Which is not what we think of the world's greatest playwright to be.

Do you feel guilty towards his ghost?

No, not at all. I think if this guy William of Stratford—Shakespeare—if this guy wrote the plays, then he will look at this film and be pretty proud. Even though it wronged him, I think he would think that it's fun because it's a great story, and he wrote great stories as well. I don't think he'd turn in his grave. I think he'd go, "Cool, man. This is good that people are asking these questions, that people are still so interested in my work." You know what I mean? That's the thing about him: it's 400 years ago, and his work is part of the fabric of our culture. It's taught at school—there's probably five productions of a Shakespeare play in the city as we speak. It permeates us.

And Shakespeare had great respect for the role of the comic.

I think that comedy really is a way to people's hearts. I think that's why comedy movies do big business, because people want to be made to laugh, you know? And I think we still do respond to comic actors. I watched that movie, Bridesmaids, on the way over on the plane. What a brilliant film. It just makes you laugh. It's just straight-up funny. And in this age, and in this digital time where there are computer games and everything else, there is no substitute for someone making you laugh and I think that will always endure.

You're from London. What's the new Globe Theater mean to you? Has it become another mundane landmark?

Yes. Well, yeah, it's just part of London. You said you live in San Francisco? I bet you never go and do all the touristy stuff.

Actually, I do Coit Tower on a regular basis.

I can't explain why, though.

I should look at the Globe anew, because it's an amazing thing—the fact that they rebuilt it and it's there. I should pay more attention to it.

However, there's that whole song about how when you go see the Coliseum, you'd be amazed by how many people had peed on it.

It's the way it should be. People should be peeing on the Coliseum. Because people always were, do you know what I mean? I don't think we should have too much reverie over these great places. Especially the Globe. The Globe was a place of debauchery, and alcohol and sex—it was like a bear pit. What we think of as being theater now, it was for the working classes, and it was rough. And it was for everyone. And that's the thing that theater and art should always continue to be: for everyone and in no way exclusive.

You guys were muddy a lot on set. How was that?

It's good. It helps you get into it. We were wet a lot, as well, because there of that big sequence when Hamlet is performed for the first time to an audience and it starts raining. The idea is that these 700 audience members are so wrapped up with what's going on onstage that they ignore the fact that they're getting drenched. So we spent a lot of time under a rain machine and it was the extras I felt sorry for. If someone brings me a coat. I'm an actor. But I don't bring coats to the extras. [Laughs] They get a raw deal.

You recently played Anne Hathaway's dorky comedian boyfriend in One Day. How does someone funny act unfunny?

I think the very act of acting unfunny is in itself funny, because cringe comedy, the theater of embarrassment, is always funny because it hurts. It hurts to watch, right? So you might not laugh out loud, but it gives you a visceral physical reaction to see someone dying comedically. And I think that is funny in itself. And that's why Ricky Gervais has been so successful. I don't think he got a raw deal because in the end, he kind of wins. He doesn't get Anne Hathaway, but he finds happiness elsewhere.

What can you tell me about your part in Ridley Scott's Prometheus?

I got sent an email by the good people at Fox about what I'm allowed to say and what I'm not...that I haven't read. [Laughs] But I can tell you that I am a scientist. And I can tell you that it's going to be a pretty amazing film. I think that if you look at the fact that Ridley's only directed two sci-fi films, Blade Runner and Alien, and this is the third one, these are pretty serious movies, some of the best films of all time. And I think people are really in for a real treat.