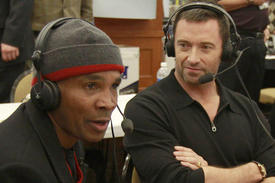 Sugar Ray Leonard is the rare athlete who is synonymous with the sport at which he excelled. A Boxing Hall of Famer who won world titles in five different weight divisions, he is among the privileged few whose name is referenced with the reverence and awe of mythological boxers like Ali, Marciano, or Joe Louis. And now he's betrayed humanity by training the robot fighters of Real Steel to be realistic contenders. I kid. Sugar Ray's success at turning metal clods into nimble champions is self-evident. In consultation with the film's special effects team and the motion capture actors who stood in for the robots during filming, he managed to create machines with individual personalities and noticeably distinct fighting styles. Best of all, they're utterly believable, a testament to the man's utter mastery of all things boxing.

I went toe-to-toe with Sugar Ray Leonard to talk about how he helped endow these machines with a kind of humanity, the process of making Hugh Jackman into a competent-looking fighter, and most importantly, just who is his favorite boxer of all time.

Oh, and I also received a free boxing lesson:

You worked with individual boxers during shooting who were then used to stand in for Real Steel's bots. Can you talk about how you worked with them, what it took to give them individual fighting styles?

To do that, I observed the robots, their design and their persona. You have Zeus who's huge, monstrous, a big George Foreman type of boxer—

Definitely '70s George Foreman. Foreman progressed through his career, I mean, George was a smart boxer. He was not that agile, but he was a smart guy. [Laughs] Obviously, you see he has a grill...

I use it actually!

I do too. But then I looked at Atom. He reminded me of myself—he's big by comparison to humans but small compared to the other robots. I gave him more of a dancing type of style.

He was definitely a much more agile fighter.

More agile, faster and had a sense, especially when you look at those big eyes, a more humanistic type of expression.

Yeah, the sewing of the mesh on his "face" gave him a kind of wry smile. You know, growing up I used to watch you fight and you kind of had the same look on your face, especially right after a fight.

When you were coordinating these fights, did you feel like you wanted Atom to be your avatar on screen?

That's a good question. I didn't know the capabilities of these robots. I expected these guys to be rather stiff, very mechanical and methodical. When I realized how far they've come with [the technology to make] these robots, I went to work. In one scene, I had a robot throw a punch waaay below the belt. [Laughs] You remember that?

I remember the scene, the whole audience saw it and went—

Exactly. I did that just playing around with the guys and then decided "You know what? Keep it in." Because I knew the audience would see it and just go, "Oh god!"

When you were approaching the fight choreography, did you approach it like "Okay, this is a perfect world and I am now the king of boxing, the Monarch of boxing." Did you have dictatorial powers because it was your imaginary boxing world?

Oh, I went off the hook because I could almost create whatever kind of fight I wanted, whatever I envisioned. I got to have this massive guy spinning around, imagining fighters with amazing speed of hands, incredible power, able to just jump up. It was like playing with toys.

You mentioned Foreman a moment ago, and as you know the robots in Real Steel have unique personalities. What other fighters were you thinking of for bots like Midas, like Twin Cities?

For Twin Cities, I took a little piece of [Marvelous Marvin] Hagler, him being ambidextrous, I took a piece of Tommy Hearns, being tall and able to just overpower his opposition, I took a piece from here, there—from a lot of fighters to create those personalities.

As a boxer, you fought orthodox stance, but you worked closely with Hugh Jackman. Maybe I'm totally off base, but I noticed, especially during the shadow boxing scenes, you have him fighting in a southpaw stance. Was that intentional?

Absolutely, I thought his left arm was bigger than his right indicating he's left handed.

It was nice touch having that rotator cuff injury on his left shoulder.

Exactly. You know I suffered from that injury myself—I had surgery—and I think it subconsciously developed from that. But I was really stressing with Hugh that it's not really the punch I wanted to get from him, although it does matter. I wanted him to show that look of a fighter who when he throws a punch, there's that deadly intention, and he totally sold that.

Especially the scene near the end when he's shadow boxing with Atom and that look comes over his face, that almost zen detachment where nothing matters but the fight.

I stressed on that significantly. Especially the way it bears on the relationship between a boxer and his trainer. I told Hugh that the relationship between a trainer and his fighter is very intimate. You don't have to talk as much as you think—sometimes it just takes a look. And during those scenes with Atom, he pulled that off. I knew he pulled it off when I took my kids and my family to a private screening. During those scenes where he's just giving everything to the fight, I looked and saw my wife and mother-in-law in tears. I felt like, "Wow, we did it." Because it really is here [points to his heart], it's all here.

Related to that, I've read you talking about your work with Hugh Jackman, the way you went about making him into a good cornerman for these robot fighters. You based him on [former Muhammed Ali cornerman] Angelo Dundee. Angelo, of course, never boxed professionally—he was a trainer and corner man from day one—while Hugh Jackman of course has a history as a fighter himself. Can you talk about what makes a good cornerman?

There is indeed a correlation there, though just because you're a good fighter doesn't mean you'll be a good trainer or cornerman. What matters is that ability to register with your protege, your fighter. Angelo Dundee had that. He didn't train me, he didn't train Ali. But he had that ability to stay poised during some pretty tough times, and he had that connection with me, with Muhammed Ali, he gave just enough time even if it was only 10 or 15 seconds, it was just enough time.

You mentioned specifically he knew how to talk to you during a fight.

Exactly, he knew how to talk to me, he'd say the right thing, gave me the right soundbites. Ali fought this guy Cooper*, he knocked Ali down. Ali was hurt and Angelo cut his gloves give him more time to regroup for the fight. That kind of quick thinking, that kind of communication is priceless.

This is a generic question, but I have to know. Say you have the entire history of modern boxing to choose from. Who is your favorite boxer of all time?

Muhammed Ali. He transcended the sport. Love him or hate him, you respected him and I wanted that for my own career. I wanted that quality and I worked hard in my boxing career for that. In a way, the fact that I got this job is related to that. Working with Shawn Levy, with Hugh Jackman, the cast and crew and we got this movie out of it, it was a priceless experience.

*English boxer Henry Cooper, who fought a 1963 bout with Muhammed Ali, still known as Cassius Clay at the time. When Ali was knocked down, he caught the ropes but was visibly dazed. Angelo Dundee tried a variety of quasi-legal tactics to rouse Ali. He finally cut one of Ali's gloves, claiming that they now needed to be replaced. The time it took to debate this assertion gave Ali room to recover and denied Cooper the chance to knock him out while he was still dazed. Ali went on to win in the 5th round by referee decree.