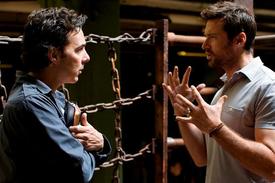 Shawn Levy is inarguably successful as a director of popular films. His filmography is dominated by solid hits like Date Night and the Night At The Museum series. But he's yet to win critical success—or even critical sanction—until now. Real Steel is an engaging and strangely personal film about giant robot boxers. And even Levy himself seems excited he got it made. In person, Levy strikes you as unashamedly sentimental, friendly and surprisingly humble about his position in the film industry—he's aiming to please with a flick he's clearly excited to show. So excited, in fact, he confirms that the studio is already thinking sequel. Boxoffice asks him the big questions: Is the starring robot, Atom, alive? And in a world where robots can glide and punch, what remains uniquely human?

You know, I have to admit I went into Real Steel a bit skeptical.

I'm fascinated by how many people go in skeptical and how many come out pleasantly surprised. I think I'm okay with that because the movie is about defying expectations, so why shouldn't our movie defy expectations too?

It was a weird mix of a kind of bald emotion, especially the relationship between the father and son, and just the right amount of robot-on-robot carnage. I know when you came to the script it had already gone through several drafts.

When I came on board, there was the father/son story, and there was robot fighting, but I didn't feel it was a moving movie. I felt that to just to do robot carnage wasn't fresh enough, so I said the model for this was going to be way less Transformers and much more Rocky, much more The Champ. A rousing, almost traditionalist underdog story of the kind I grew up with.

What about Over the Top?

I'm so bummed I've never seen that movie because I've been asked because of the father-son dynamic, the similarities in the underground competition. That and Robot Jox and I can sincerely say I've never seen that either. But I spent six months rewriting the script, but I knew from my very first meeting with Steven [Spielberg], I said that in the final round of the final fight, we need to use shadow mode, which wasn't in the script. That fifth round we wrote from scratch and I think it ended up being the heart of the movie.

It was a nice call and response back to the earlier fight when Charlie Kenton (Hugh Jackman) destroys Noisy Boy.

Exactly, I felt like it tied the film together.

One of the questions the film sort of pokes at is just how aware Atom, the main robot fighter, is of his circumstances. I have to ask, is Atom conscious or not?

I love that. [Laughs] I've been asked that a hundred times. I will say that certainly the boy believes he is. In the end, Hugh Jackman has come to believe he is. I had an early cut in which I firstly confirmed that, yeah, Atom has consciousness. I have another that completely debunks that "delusional" theory. In the end I chose to toy with the maybe. I think that the number of people who have asked me about it shows that the question might be the magic in the movie. So I don't know—or rather, I do know but I'm not telling.

Had you read "Steel" (the story by Richard Matheson on which Real Steel is based), or seen the Twilight Zone episode before you started working on the movie?

Nope, but definitely after I took the job.

You know the original short story was written back in the '50s and it's more of a metaphor for the mechanization of the American workplace and the resulting loss of jobs. Your movie is obviously a different take. You chose not to make a parable about capitalism, but instead to focus on redemption.

I think our film is more a parable for humanism. Here's the thing: Matheson wrote a parable for the mechanization of society. But it's 50 years later and you know, he's right. He was right and you see this increased centrality of the machine in our society. That process hasn't been without significant problems, but it also hasn't been the disaster people predicted and from that point of view, the statement I feel compelled to make is the championing of the human. I think Matheson's fears were well-founded. We've seen that and I wanted to make a kind of love letter to the human, to the qualities that are indispensable.

I would in the same breath point out that when I read that story, and when I saw that Twilight Zone episode, what struck me was not only that I wanted to take the premise of robot boxing, but that the protagonist that Lee Marvin plays on the Twilight Zone, there was a solitary desperation to that guy. I consciously designed my opening title sequence, which is nothing more than Hugh Jackman driving his truck to an Alexi Murdoch folk song, no words and long, lingering shots of Hugh's face because I wanted to establish that we've tethered the movie to this solitary, desperate protagonist. Yes, you came for robots, but settle down—we'll get there.

I'm thrilled to say he screened the movie a few weeks ago, reached out to me and my producer and was very pleased with what we did.

Hugh Jackman's character is sort of a throwback in Sci-fi protagonists. He's down on his luck, he's dealing with, basically, scum.

One interesting challenge I had during the movie was making him play such a prick. He is such an inherently likable guy—he's like sunshine, this guy—and I knew that Charlie Kenton had to be an extremely unlikable guy for the redemption to mean anything by the end.

The '70s I've been very conscious of as I made the film. You've got that '70s anti-hero protagonist for the lion's share of the movie, and there's a Paper Moon aspect to it.

The person who saw the film with me said that almost word for word.

DreamWorks told me they're conscious of the Paper Moon thing. It's so interesting because for a year and a half, everything I've read about my film has been a reiteration of Transformers or Rock-em-Sock-em and all I could do is think to myself, "You'll see."

You mentioned earlier how you wanted to pay tribute the indispensable qualities that make us human. What is it you think essentially makes a human being human, that differentiates us from machines?

I think the ability to make choices that aren't based on logic, whatever we call gut-checking, or instinct or impulse-the stuff Malcolm Gladwell wrote about in Blink. Some quiet inner voice that isn't anchored in the rational brain. It's why we respond to certain people, why we fall in love with certain people, why Response A makes more sense to us at a given time. I just think the kind of illogical motivation behind our choices is what makes us human—and sometimes they get us into hot water, but that too is uniquely human.

Finally, Evangeline Lilly. In the first part of the movie she's established as a competent robot mechanic with a strong boxing background. While her character remains part of the story through the end, she's sort of pulled back as Max (Charlie Kenton's son) is introduced. Were there ever plans for having her more involved with the robots later in the film orhaving a more active participation in the ending?

Good question, and I can say that every single scene that was ever written for her character is in the movie, and she brings so much to it-it's really an amazing performance. We didn't reduce her role, but we already had what I felt was a dense full movie so we didn't end up expanding on her. But I will say that if we get the privilege of having some success this fall and get to make the next chapter in this world that has been rumored to be in development—those rumors are true—then we will be further exploring Evangeline's character's savvy with 'bots and boxing in much more detail.