close
OPINION: Opinion: When the Imagery of Rebellion Becomes the Face of the Establishment 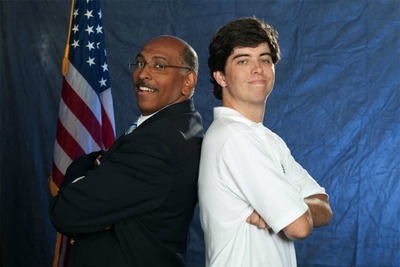 America has a funny relationship with rebellion. Our national founding myth is basically the most successful FU to authority from 1776 until the 1920s, and as a result, both of our political parties invest heavily in courting voters by convincing them that they're the ones continuing that legacy. Lefty types can point to, say, union agitators, civil rights activists, hippies or even punk rockers. You know, actual rebels. That's particularly true since the 60s, when the idea of the counterculture became expressly linked to the left side of the political spectrum. By rejecting any association with popular culture of the last 60 years, the Right Wing kind of screwed themselves out of their own compelling narratives of revolt. Their ad hoc attempts to catch up basically involve claims that they're rebelling against the 'true' establishment, nowadays generally some combination of political correctness, the 'liberal media' and whatever minority group is currently considered fair game.

The problem for them is that while they keep racking up an impressive record of political victories, no one will ever consider them 'cool'. Sure, they pretend that they hate all that counter culture nonsense, but like everyone else in our image driven society, they too are desperate to be considered 'hip' and 'with it', or whatever out of date slang they still think people use. But they have utterly lost the culture war. Rock 'n Roll kicked Lawrence Welk's ass. Rap completely went mainstream. And like it or not, everybody likes to have premarital sex! What's to be done?

Well, there's one decade in the last 60 years they aren't ashamed of, the era conservatives insist to this day was an unparalleled golden age for America: the 1950s. It was the decade of Brando, Elvis, James Dean, when the classic Teen Rebel lived in a state of perpetual moody alienation and always wore a leather jacket which handsomely covered over his emotional scars.  Sure, to the rest of us, the 50s Teen Rebel is now a hilarious cliche, lamp-shaded in everything from Grease to Beverly Hills 90210, but he was once the symbol of intense, sexually charged badassness, and nothing codified that more than James Dean's posthumously iconic role as Jim Stark in the 1955 classic Rebel Without A Cause.

Rebel was one of the first serious attempts to deal with the gigantic baby boomer teen population and address what we now recognize as the confusion and alienation of postwar America. It single-handedly created the idea of the out-of-town rebel who fights both bullies and authority figures, with parents who literally just don't understand. But even though it's partly responsible for creating an image of the 50's as a period of hopelessly repressed conformity, the film itself is greatly misremembered in popular culture. It's important to note what actually happens: family values are proved to be Right All Along.

That Dean's Jim Stark is a teenage screwup is due not to any of the real fundamental problems in America; at no point is he angry about, say, Segregation, or state-sanctioned violence against civil rights activism. He's pissed off because his dad is a henpecked wimp. Jim's mom is an absolutely insufferable shrew, constantly nagging his pushover father. They fight constantly and yet Dad, despite being king of the family by right of his ineffable maleness, always backs down. At one point an exasperated Jim even screams to his father that he never taught him (Jim) how to be a man. Meanwhile, Jim's sidekick Plato (Sal Mineo) is a creepy, psychologically unhinged product of a broken home raised by (gasp!) a single mom. And the less said about Natalie Wood's Judy - who really just needs to find a real man - the better. As if that wasn't enough, one of the film's most famous scenes has the three teens play-acting the creepiest game of 'house' in history with Jim as the loving, firm father, Judy as his doting wife and Plato as the adoring son*. After a couple of tragedies, the film ends with Jim's dad promising to be a stronger father, thus solving his family's problems. And no, that is not a joke. The most famous ode to the rebel in cinema history is actually a celebration of the intrinsic worth of so-called traditional family values.

No wonder conservatives love the 50s so much! Sure, the idea that the real rebels are the ones agitating for tradition and the status quo is laughable, but when you reject the concept of sexual equality, or protection for the economically disenfranchised, you don't really have a lot to work with. Which only serves to make Conservative attempts to be considered cool all the more hilarious.

Which brings me to Herman Cain. Well actually, to Michael Steele. You may recall Michael Steele from his two-year stint as Chairman of the Republican Party. Largely a buffoonish self-promoter, he is most notorious for his constantly ridiculous attempts at youth outreach via awkward co-opting of hip hop slang. When he left his position at the end of 2010, it looked as though we would be forever denied such rich, delicious squareness. Until today. Possibly the funniest thing you'll see all year is this regrettable ad for Herman Cain, posted by Cain campaign Chief of Staff Mark Block. Behold Mark's attempt to channel his best James Dean impression through what appears to be a drunken fog.

That ending, without any warning or apparent irony... I mean, does anyone actually think smoking real cigarettes is cool? And is his dismissive blowing-smoke into the camera supposed to conjure up images of a devil-may-care rebel on par with James Dean? Who knows! I can't imagine anyone would see this and think 'sexual dynamo', since emphysema tends to ruin one's stamina, but whatevs. What's sadder still is that mustache, which adamantly refuses to accept that they are only cool ironically, and even then, only if you're also wearing a Peter & The Magician t-shirt.

Really, it only brings one thing to mind. This**:

The fact is, when your entire platform is to give as much power as possible to the people who already own everything, you are the precise opposite of anything that might be called 'rebellious'. But once again, that's due the decades-long Conservative project to utterly reject popular culture. It has made you all as confused as my close friend's father who once enjoined him to 'do the homies' one Saturday night. Hilarious to be sure, but come on... A better plan for conservatives would be to forget the 50s, and learn to embrace their real golden age. You might remember it for mountains of cocaine, Cyndi Lauper and boxy Beemers. Hollywood is even going for a revival as we speak. Forget trying to relive Happy Days: break out the LA Looks gel, phone up your old dealer and get your sociopathic greed on.

Just be warned: Even in the 80s, your hipness will be in another castle***.

* (It kind of puts Sal Mineo's claim later in life that he and Dean were lovers into some interesting new light. Then again, that kind of subtext is also a staple of modern conservatism...)

**H/T to Amanda Marcotte, who got to this joke first.

***And yes, I fully get that Mark Block probably doesn't understand that reference either.