close
INTERVIEW: Explains how the development of the script began 15 years ago, and the reaction he's encountered since

Screenwriter John Orloff on Tackling 'Assumptions' About Shakespeare With 'Anonymous' 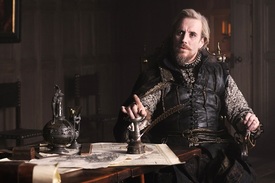 Call it A Tale of Two Writers. Right after John Orloff graduated from UCLA, he was struck by an argument that Shakespeare wasn't Shakespeare—he was Edward de Vere, the Earl of Oxford. An author himself, one also still struggling to get name recognition, the idea burrowed into his brain and lay dormant until he was ready to lay it on paper. That script caught the eye of Tom Hanks, but it didn't get his movie greenlit. Instead, it gave Orloff a chance to build up his resume as part of the writing staff of Hanks' Band of Brothers on HBO. But in this passionate interview, it's clear Orloff never lost his heat for the project—and with Anonymous finally hitting theaters, his enthusiasm for the big reveal is boiling over. Even if, as he admits, he'd happily steal credit for one of the Bard's plays himself.

Did you believe that the Earl of Oxford was Shakespeare and then felt you had to write the script, or was it after you started writing that you became convinced you were right?

I thought that de Vere was the writer before I wrote the script. I became obsessed with the Shakespeare authorship issue when I was in my early 20s and had always wanted to be a screenwriter or a filmmaker. In my late 20s, I decided to write the script. So it's been about 15 years since I wrote it. And one of the original driving ambitions of why I wrote the movie was to say that this is the man who wrote the plays.

You wanted to let out the truth.

But that's truth in a big capacity: one massive truth, even though the small details are false. To get to an inner truth, sometimes you have to tell some lies.

Yes! Exactly. You have two hours to tell the story. I've done a lot of non-fiction-based work before, and I've learned over the years that the emotional truth and the literal truth can be the same thing, but expressed differently. And you have to be careful in a dramatic piece of work that it's dramatic. And life isn't always dramatic, so sometimes you need to combine things or characters or places. But at the same time, having said all of that, Anonymous is a phenomenally accurate film, if you take the conceit that Edward de Vere wrote the plays. The biography of de Vere in the movie is incredibly accurate. And a lot of things in the movie are incredibly accurate. There are some cheats, but we had to do that to make a movie.

The movie believes that words outlive people. As a writer yourself, that's a lot of pressure.

Yeah, well I didn't write the movie for a long time because of the pressure. You know, I was 23, 24 and I was like, "I want to write this movie." But not only am I going to—I'm American—I'm going to have to write English dialogue that sounds English. Not only that—and this is before Shakespeare in Love came out—not only am I going to have to write dialogue for Shakespeare to work, the mouth of this genius, and then I am going to write that he didn't write the plays! So it was a little too awesome for a 25-year-old. But by the time I was 29, I thought, "F--k it. Let's have a go." And I wrote the script. And yes, it is a complicated topic, but it is also my favorite theme, just in life, of art and politics. Those are my two favorite things. And so, the movie—it might sound cheesy—but it really is about the pen is mightier than the sword. Ideas are stronger than might. I think that's kind of universal and really cool.

How do you feel England is going to handle that?

I don't know and I don't care!

You don't care! You and Roland Emmerich have been drinking the same Kool-Aid.

Well, let me ask you a question.

Well, your question is predicated on the belief that I take Shakespeare personally, right?

Right, because it turns out, a lot of people do.

People have had dinner parties with me—and I'm talking about way before this movie had gotten made—and we would be sitting at dinner and somehow this would come up. And people would storm off and leave the dinner party. Like we'd have a shouting argument, you know? And it's like, "Dude, come on!"

It's hard. You're wrestling with the difficult balance of saying the pen is mightier is than the sword, but that truths are not that crucial.

And those two things are sort of at odds with each other.

Well, except if we go back to our emotional truths versus our literal truths. Those can be different but not at odds with each other.

Fair. Different, but not at odds with each other—but still in cases confusing.

Because the difficulty is that you're not just communicating an emotional truth. You're talking about a historical circumstance and people take their history very literally.

Right. This is the thing that upsets me about this whole issue. Which is how little most people know that what they're taught about Shakespeare is a made-up story to begin with. The facts of William Shakespeare's life are so unknown and thousand page biographies have been written about him. But 998 pages are fantasy! Are guesswork! Are assumptions!

But they purport to be the truth.

Correct. And that was the first thing that kind of stunned me when I learned about the Shakespeare authorship issue—how much of what we're told and is presented as fact is, in fact, guesses and assumptions. And that kind of really upset me. And I think, if anything, maybe this film will illuminate the fact that there is wiggle room when we talk about William Shakespeare because we really don't know anything about the man. I mean, when I say we don't know anything, we don't know anything. And so, that's one of the reasons why there has been doubt to his authorship, because there's actually no proof he wrote anything. There's no piece of paper that has ever been discovered. Not a single letter has ever been discovered written by William Shakespeare.

So how is it true to the spirit of the question to make this film a big, glamorously excessive blockbuster, as opposed to, say, a documentary?

Well, Roland has actually made a documentary about it, too.

About the subject? Is that coming out soon?

I think it's going to be on the DVD. I don't know. I don't know a lot about that. But I don't make documentaries. And I never wanted to. And so as I said, I wrote this movie 15 years ago. And this is my medium. This is my paint box: film. And so, yeah, I mean, a documentary's one of the first things that got me interested in it. There's a Front Line PBS documentary from 1987, I think, that talked about Edward de Vere as the true author. And that's one of the very first things that got me interested in the subject matter. But to me, again, I think, and what's interesting is, it's almost hard to believe when you sort of say, "Oh, William Shakespeare didn't write anything." And you go, "What? You're f--king crazy! Of course he wrote everything." But it actually, I think, is almost easier to understand an alternative truth in this fictional movie because there are no motives in history. And we give motives. I mean, when you look in Rhys Ifans' eyes, I think you can believe it!

Which means that it could conceivably boil down to someone's, say, charisma.

Yeah! But isn't that what history is? History is written by the winners, as they say. History is a malleable thing, you know? I'm doing a movie in China and I was in China a couple of weeks ago talking about World War II with these Chinese communists, and trust me, it's a different history than I have. And they believe it just as firmly as I believe mine.

Morality gets involved in these assumptions and identities.

Identities. Yeah, identities are also very important in Shakespeare. A lot of his plays, the plots revolve around identities. Is a boy a girl? Is a girl a boy? Who's who? And whose child is whose? Which, in itself, is an interesting thing.

Right! And it ties too poetically to the circumstances.

Exactly. Well, that's the reason why people become really extreme Oxfordians. Because when you read the man's biography, you kind of go, "Holy f--k! That's Hamlet! There's Lear! That's Prince Hal in Henry V!" Hamlet becomes an autobiography! If you know anything about Edward de Vere's life, it is a shocking autobiography. So when he's saying, "To be or not to be," it's not some fucking ephemeral, pulled-out-of-thin-air dialogue, it's a man's tortured soul talking that really had this experience, or something like it. Something so like it you can't believe it. I mean, I'm not going to try to convince you. Do some research about Hamlet and Edward de Vere and you'll go, "Holy f--k!"

How much did this script change from this originating point written over 15 years ago?

Fifty percent. The original script is 50 percent of the movie. It's the Ben Johnson, de Vere, Shakespeare relationship and almost no acts of succession, no politics, no who's going to be on the throne next. All that came later with Roland, working together.

No, what happened was my script became the B-plot. And we added a whole new A-plot on top of it with Roland.

One with more explosions.

Okay, so what about you? If you had the opportunity to identity swap, would you put your name on one of those plays?

Of course I would. But I live in the 21st century.

Absolutely. You know, in the 16th century, a playwright was on the same social status as the kitchen maid! Playwrights were servants. They were there to entertain you, just like the food was made by servants. It's all a class thing. And so in the 16th century, one of the richest men in England is not going to say that he makes the beds at night, is he?