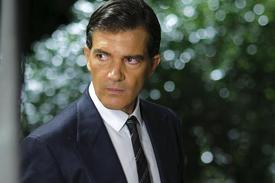 Antonio Banderas has been a punchline for as long as he's been a star. He's often been spoofed, even dismissed, as a cheesy himbo for his thick accent, ridiculous good looks, and unfortunate penchant for Latin Lover roles. However, the 51-year-old Spanish actor's latest role as an obsessive plastic surgeon with a twisted revenge scheme in Pedro Almodóvar's Hitchcock-meets-Saw thriller The Skin I Live In returns him to his Spanish arthouse roots. Banderas' tall, dark handsomeness gave him his start in Hollywood in the early 1990s, but it's his "anything goes" attitude and surprising lack of vanity to which he owes his unlikely career longevity. Here are seven reasons why Antonio Banderas deserves more respect (and better roles):

2. His embracing of gay roles. In 1987, Banderas shocked even Almodóvar's audiences in Law of Desire by locking lips with a man (while playing a character named Antonio) for the first gay kiss in Spanish cinematic history. Upon his arrival in Hollywood, Banderas continued to show a lack of heterosexual vanity, playing gay characters in Interview With a Vampire and Philadelphia. His small role in Philadelphia was especially brave to take at the nascence of his Hollywood career, as the film was made in 1993 when AIDS hysteria and gay stereotyping could still kill a career.

3. His mastery of Latin Love. Let's give credit where credit's due. Even in middle age, Banderas has surplus quantities of the ingredients for Latin Loving: striking handsomeness, a velvety accent, obvious sexual charisma. Whether he's a boy toy in Miami Rhapsody, a lovelorn patsy in Original Sin, or the iconic swashbuckler in The Mask of Zorro, Banderas is always magnetic as a victim of his passions and a ravisher of repressed white ladies.

4. His trailblazing work for Latin Americans. On screen, Banderas is a proud citizen of the illustrious nation of Spexico, a land located somewhere between Spain, Mexico, Argentina, and Shrek's swamp. In his long career, the European Banderas has probably taken more than a few Latino roles that might have otherwise gone to a Mexican, Cuban, or Argentine actor. But Banderas' frequent roles as a Latin American have also made Latino characters more visible in whitewashed Hollywood, and his embodiment of those roles imbues color into racially non-specific characters, e.g., a live-action Mr. Incredible in Spy Kids and a duped photographer in Femme Fatale.

5. His sense of humor about himself. As a veteran of Hollywood pigeonholing, Banderas is thoroughly aware of his exotic image and accent, the latter of which he has called a professional "handicap." Nowhere is his good-humoredness more in evidence than his voiceover roles, where his career liability becomes a source of knowing self-parody. The debonair but adorable Puss in Boots in the Shrek trilogy and his own upcoming Puss in Boots is clearly Banderas poking fun at his Latin Lover image, as is his otherwise inexplicable role in Nasonex commercials as a would-be seductive bee foiled by his allergies.

6. His collaborations with director Robert Rodriguez. Banderas has served as a frequent muse not only to Almodóvar, but also to maverick director Robert Rodriguez, with whom the actor has made seven films. From the action thriller Desperado to the cult classic Four Rooms to the family-friendly Spy Kids franchise, actor and director have enjoyed a synergistic partnership, with Rodriguez showcasing Banderas as a "Latin James Bond" and Banderas incarnating the stylized realities of Rodriguez's films.

7. His seeming inattention to his career trajectory. In a recent interview about his future career prospects, Banderas declared, "I'm always open to f--king up." The many, many terrible films that pad his 80+ credits are probably the result of his (too?) flexible attitude toward his filmography, but that laissez-faire sense of adventure is likely also the secret to his unexpected success in Hollywood. Banderas is, after all, that rare accented foreign actor who has managed to have a sustained Hollywood career while so many others—Gael Garcia Bernal, Roberto Benigni, Gerard Depardieu—have floundered.

Tags: Antonio Banderas, The Skin I Live In, Puss in Boots
Print