Sympathy For the Devil: Why Is Hollywood Asking Us to Empathize With the 1%? 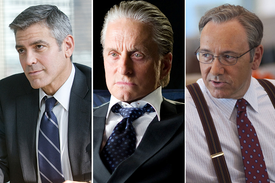 At the age of six, the apple-cheeked, tap-dancing Shirley Temple was made a star by America's boundless need for escapism at the movies during the Great Depression. (Word is new President FDR begged Hollywood to do something to replace the popularity of gangster flicks.) Moviegoers of the 1930s scrounged in their hole-lined pockets for the quarter and two pennies that would afford them two hours' peace from their economic worries. The Great Recession of our times has also had audiences seeking temporary relief from their troubles at the movie theater. Case in point: the top-grossing movie at the box office for the last two weekends was Hugh Jackman's Rock'em Sock'em Robots. But a tiny number of Hollywood films have bid for sociocultural relevancy by tackling the Wall Street collapse of 2008 and the widespread anxiety and fear it left in its wake, including the new film Margin Call, out last weekend. Starring Kevin Spacey, Paul Bettany, Zachary Quinto and Stanley Tucci, Margin Call is a handsome, well-paced film with an outstanding cast that's garnering overwhelmingly positive reviews. It's also a film that emblematizes one of the most quietly offensive trends to emerge from Hollywood in the last three years: the recession film that asks its audience to sympathize with the bankers and hatchet men who caused the financial crisis, rather than the 99% who were most directly and disastrously affected by the economic downturn.

This trend of rooting for the rich began with 2009's Up in the Air, directed by Jason Reitman. Although it was shot just before the 2008 Wall Street collapse, the film was heralded upon its release as a portrait of our anxious, uncertain times. George Clooney lent his crinkly eyes and natural charisma to a character whose job is distributing pink slips with a benign smile and empty, self-help phrases like, "This is a rebirth." Reitman and Clooney, in a meta-casting choice that bares the famously Democratic actor as a limousine liberal par excellence, ask us to identity with a professional terminator suffering a rare bout of guilt—not his casualties. The film claimed recessionary bona fides thanks to its gimmicky inclusion of interviews with real people sharing their experiences of being laid off. But those interviews were later exposed as advertised and elicited under false pretenses-the interviewees thought they were contributing to a documentary about unemployment. Thus, Up in the Air not only reserved its pity for the hatchet men, it even profited off the jobless.

Oliver Stone's Wall Street 2: Money Never Sleeps premiered in 2010 to similar observations about its Zeitgeist-iness. Being a sequel, Money Never Sleeps had to be about Gordon Gekko and his reptilian ilk. But Stone didn't begin production until 2009, which means he made the deliberate choice to shoot a recession-themed movie starring the bankers. (Sure, Stone loves injustice, but he's obsessed with men in high places.) Wall Street 2 is the closest a mainstream Hollywood movie has gotten to an indictment of the avarice and recklessness of the bankers responsible for the financial crisis of 2008. But the film's indignation falters towards the end, transforming the man synonymous with sociopathic greed from an abrasive villain to a fuzzy gramps. In the film's disappointing epilogue, Gekko enjoys a soft-focus redemption that has him playing with his baby grandson in a high-rise Manhattan apartment that none of his victims could afford.

As for Margin Call, it imagines the financial collapse of 2008 as a thriller. The action—if that's what you can call staring grimly at spreadsheets—takes place within 24 hours at a Lehman-like investment bank that faces overnight demise. Like any conventional thriller, Margin Call features a large, attractive cast and a dangerous monster: a faulty algorithm that loses the firm a lot of money very, very quickly. While the film does depict the cover-up of that catastrophic loss as a moral failing, the problem is it portrays the loss itself as an inevitable twist of fate, like a new virus that emerges out of nowhere and rapidly spreads across the globe, rather than the natural result of the banking industry's over-reliance on technology and self-induced financial deregulation. While the bank fails, a banker looks out at the city and laments, "Look at those people, wandering around with no idea what's about to happen." So while Margin Call deigns to sympathize with the 99% (and call them only, "those people"), it also absolves bankers of blame for the corrupt system they constructed.

Hollywood is an industry that survives and thrives because of its populist mentality. To maximize the number of ticket sales, every movie must appeal to as broad an audience as it possibly can. But these supposedly relevant and timely movies about the Great Recession have been little more than apologias for the money-grubbing bankers who created the Wall Street collapse. That's unsurprising given the paradox at the heart of Hollywood: its populist sentiments are peddled by the millionaire and billionaire studio heads who greenlight projects. (And those studio heads must borrow millions of dollars from banks to continue financing movies.) It's no wonder, then, that recession films have focused on the guilt of the 1% who did the damage, rather than the rest of the Americans who have been laid off after factory closures, foreclosed upon, unable to find a job in months or even years, or applied for food stamps for the first time. If Hollywood really wants to continue making relevant movies about bankers, it should just stick to what it does best—wish fulfillment—and make a film about bankers getting punched in the face for two hours. We'll call it Sock'em Sock'em Banksters.