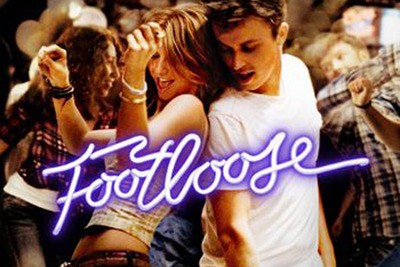 Craig Brewer's Footloose remake is actually quite good. The dancing is insanely well choreographed and there are great performances, especially from co-star Miles Teller. It also hews rather closely to the original, the primary difference being that the plot begins from a much darker place.

See, in Footloose 2011, Renn MacCormack has moved to a small town in Georgia to live with relatives after the death of his mother from a prolonged battle with Leukemia. He arrives to find the place equally traumatized by the deaths of 5 high school kids 3 years prior. Those deaths led the town to ban all underage dancing and partying of any kind. Renn gradually learns to cope with the loss of his mom while the local minister copes with the loss of his son.

Against that backdrop, the events of the film unfold very closely to the events of the original. No problem with that, since it is the standard remake skeletal structure, right? Not so fast, people who are unwilling to see what is right in front of you! Watch closely and you'll notice something a bit odd about the remake's soundtrack. Most of the songs you'll hear are modern remakes of songs from the original film's soundtrack. But two critical scenes actually use the original film's versions:

* During the opening title sequence, the teenagers at a party are dancing, drinking and, yes, actually singing along to the Kenny Loggins version of "Footloose".

* When Willard learns how to dance, his montage is set to the original Deniece Williams version of "Let's Hear It For The Boy". Before the montage kicks off for reals, the song is played in a banged up old tape player by Renn's young cousin and her friends.

Let that sink in for a second. Are you terrified? You should be, because that's confirmation that the kids in the Footloose remake are totally aware of songs from the 1984 original. And that means that the Footloose remake takes place in a world in which the original 1984 version totally exists. How the hell is this even possible? Do the kids in the film know that their lives just played out identically to one of the most popular movies ever made?

I believe I've discovered the answer. Allow me to totally blow your mind:

Footloose 2011 is a deliberate recreation of the events of the original by protagonist Renn MacCormack.

Renn is 17 during the events of the film, which ends on prom night. I take that as a sign Footloose 2011 takes place in Spring, 2011. Renn doesn't celebrate a birthday, but he presumably turns 18 soon after graduation, which means he was born in 1993. His mom is originally from the same small town Footloose 2011 takes place; she left town young and eventually ending up in Boston living with, but strongly implied to have never married, Renn's father. At some point, dad abandons the family and leaves mom to raise Renn alone. Renn's last name, MacCormack, is therefore likely his mom's maiden name.

Mom's age was never given, but a couple of clues suggest that she's a member of Generation X. Her sister, Lulu is played by actress Kim Dickens, who was born in 1965. It's implied Renn's mom was the younger sister, so she was likely born sometime between 1966 and 1970, we'll split the difference and call it 1968. That means she would have graduated high school in 1986, making her 16 the year Footloose came out, the films prime demographic.

Living as she did in a boring small town with nothing to do, she would have become completely obsessed with the Kevin Bacon version of Footloose as a depiction of everything she wish her life could be. It would, I daresay, have become her absolutely favorite movie, a tie only further solidified when she realizes that Kevin Bacon's character's last name is MacCormack, exactly the same as her own! This manifests a subconscious decision that if she ever has a son, she'll name him Renn in honor of her favorite movie.

Fast forward to the 2000s. Renn has been largely raised alone by his mother, and they're extremely close. Likely mom made an effort to encourage Renn's interests and share her own with him, including her favorite film of all time. Renn might have been annoyed to have been named after a movie character, but he likes the dancing and enjoys the time spent with his mom, so he ends up absorbing the movie fully.

Then mom gets sick. Renn is forced to watch as his beloved mother succumbs to a painful illness which he was powerless to stop. When she finally dies, his guilt, loss and shame are too much for him. Even though he is nearly 18 and could conceivably seek legal recognition of adulthood and perhaps transfer to a local college, he instead abandons his home in Boston to return to the place of his mother's birth. There, he discovers that in the years since his mom left, the town has enacted a law just like the one in her favorite movie! Renn comes up with a plan to pay his mom the ultimate tribute: If he couldn't save her from death, he'll pay tribute to her life by recreating the events of her favorite film painstakingly.

Sounds crazy? Yes! But Renn is crazy, having been abandoned by his deadbeat dad and having lost his mom at a young age. Much like Bruce Willis' Character in The Sixth Sense had to learn to accept his own death by going through the motions of his prior life, so too must Renn go through the motions of his mother's dreams to accept hers. The only problem with my theory is that it doesn't account for the preexistence of the law banning dancing, or for the death of the 5 high school kids that prompted it.