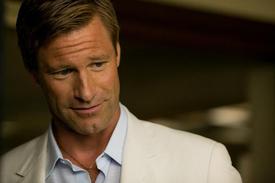 Say this about Aaron Eckhart: the blonde, almost cartoonishly handsome leading man entered Hollywood with a splash. His first film, In the Company of Men, was a project with his college buddy Neil LaBute that put both BYU grads on the map. The dark satire about two men who compete to seduce and destroy a deaf woman played Sundance and Cannes and stirred up a scandal. Since then, Eckhart has become the face of the bold American man, playing a tobacco lobbyist in Thank You For Smoking, an ambitious district attorney in The Dark Knight, and here in The Rum Diary, a wealthy investor who wants to turn Puerto Rico into a paradise for the rich—and wants to keep Johnny Depp's hands off his fiancée Amber Heard. Eckhart talks candidly to BOXOFFICE about how impossible it is to describe his job, and why his working days might be drawing to a close.

Bruce said he wanted you because he needed someone who could hold their own against Johnny Depp.

Well, that is sweet. Bruce is a good man.

He also said he wanted you because you were blonde.

Well, I guess I was then. I did hang out at the beach a lot. I think he was going for that opposite-coloring thing against Johnny, so that worked out. But I think you could put a cardboard cutout in front of Johnny and everything would be okay.

You're often cast as the All-American capitalist, which seems like a lot of pressure on you to seem totally confident.

I don't mind that, the businessman and all that stuff. I think that you have to commit to it, though. If you're going to play a role like this, you have to commit to being an unscrupulous archetypal greedy businessman bad guy. Which I'm not personally in love with in my own life and elsewhere. I wouldn't want to make a career out of it, but I have played them quite a bit in In the Company of Men and Thank You For Smoking. People seem to like that kind of guy that doesn't have any sort of morals or ethics—who runs over people and has fun doing it.

We live in precious, ecological times. Maybe in his time, your character Sanderson wasn't seen as such a villain—he was an entrepreneur.

Yeah, you could definitely see it that way. I'm not here to defend him or anything, but the island had to be built. Everything is built on the back of somebody else and has its pros and cons. There's a lot of resentment by the indigenous people, by the islanders. I grew up in Hawaii and it's the same thing there. It's always a mix of wanting the commercialism, wanting the modernism, but you create a monster in so doing.

The shooting of the film sounds a little nuts. Bruce was talking about leaving out glasses of booze for the spirit of Hunter S. Thompson.

Yeah! Johnny and Bruce had a ritual to keep Hunter present. At the beginning of the day, Johnny would often—I don't know if I should say this—but...yeah, Hunter was always there. And even when I went in for the part and met Bruce in Johnny's office, Johnny has all the Hunter memorabilia in his office. He's a diehard friend and a fan and he brought a lot of personal passion to the movie. The great thing about working with Johnny, too, is he's made so many movies with so many friends that everybody working on the movie was just part of his family. He'd done six movies with some of them. When I got there, I said, "Jesus-Johnny knows everybody." He'd walk around saying, "How are your kids? How is this or that?" He knows a lot about everyone. I thought he did all this research before. But he has this family commitment. He takes people along with him and I really admire that. It was a pleasure to work with Johnny on the film because of it.

Oh, very much so. And Johnny is very well respected. He's responsible for their livelihoods. And they're very grateful to him. When Johnny walks on set, it is presidential: everyone is respectful, reverent.

I'm curious to know your take on Hunter S. Thompson. He's such a polarizing figure and everyone has conflicted opinions of his work.

I've read some of his stuff and he always makes me laugh. I just don't know how the human body can do it. To be coherent and cogent under that influence. I'm not one of those people. There are people in Hollywood who can just go, burn the candle at both ends and still turn in a great performance. I've always admired that. What I admire most in life is vision, a person of conviction. And I think he was one of those people who saw life a certain way and executed it a certain way. Not everybody has the guts to do that.

The view of "The Artist" has changed so much—now we applaud people for how much coconut water they drink and how much yoga they do.

Yeah! It's completely different. To go to Hawaii to cover the Hawaiian marathon and end up staying in your hotel room and just boozing [as Hunter did for The Curse of Lono], I would be the one out there who's meticulously recording everybody's number. He just let loose and lived life his own way, and he was a success at it. He attracted a certain crowd around him and left impressions on people. It's a good life.

You had to transition from shooting The Rum Diary to shooting the radically different Rabbit Hole in just one week.

We had bad weather problems in Puerto Rico and I was delayed for two or three weeks. So Johnny put me on his plane and flew me to New York. We had rehearsals the next day and I was shooting that weekend. I didn't really have a choice. It's not really the way I like to work, but you gotta do what you gotta do. Rabbit Hole was such a small movie with such a tight schedule, we didn't have the time to budge, we didn't have the money. But it worked out, and then I went right in and did Battle: Los Angeles. I did three movies—three very different kind of movies—all back to back.

Your friends who aren't in the business, what's it like when you explain what you do? As in, "I was just on an island making out with Amber Heard."

I don't tell them that. [Laughs] I don't really talk about it. I learned young when I was a kid and I lived all over the world. I would come back and try to explain what Paris was like and people just don't want to know. It's too hard to explain. You always end up looking like you're showboating. But it is weird when I try to explain, "I was just with so-and-so and we were doing this and this." Every day of my life is a trip. You find yourself in crazy places. I was just down in the Dominican Republic in little clinics shooting kids with hemophilia and HIV, people dying right in front of my eyes. And then you get on a plane and come back here to Malibu and you go surf.

Wait—is that for a documentary?

I'm doing charity work for a company called AmeriCares so I went down there and shot photographs for them—I do photography. They have places all over the world, so I'll go shoot in India, document doctors and hospitals and patients.

Filmmakers usually struggle to make those stories into a movie that people want to watch. What's the hurdle?

That everybody's got their own problems. The pictures are out there, it's all out there. It's life. A lot of good stuff is done, but the problem is we assume that people aren't giving when they actually are giving. AmeriCares donates medicine as first responders to Haiti and Japan—they do some good stuff.

You've hit two plateaus in your career recently: getting a stronger say in picking your projects, and being a leading man who gets to make out with increasingly younger actresses.

Yeah, I'm an old man. I'm increasingly conscious of that, too. I tried to think of Amber as in her mid-thirties. Basically what you're saying is, "You're becoming an old man and making out with chicks younger than you is creepy."

I understand, I understand. If I saw a commercial with some old dude and some young actress....Hopefully I'll be able to pull it off for a couple more years.

What I was saying is you've hit that point where studios are casting you and the young hot girl is a bonus.

I don't want to be one of those guys. It's just not believable. And it's sort of creepy and it sort of takes over the movie. But thank you very much! What movie am I doing next where I have to make out with a young chick....?

I am curious, though, about your next film with Neil LaBute, The Geography of Hope. He's always so satirical about society—what's his target this time?

It's a brilliant movie, it's 100 percent Neil. It takes place in the '70s, but it's got the Neil social wit and the tragedy and the despicable characters that you can't help liking. Two two-bit cons go down to Mexico and start ripping off some American school teachers that are vacationing. Hilarity ensues. It's a dangerous movie and it's funny and it's totally tragic and it's totally Neil.

Are there roles that you feel like you have yet to play?

No, I just want to remake all of my movies.

Starting with which one?

I don't know? I don't have a lot of roles left to play. Right now I just did a nice little spy action movie, and I'm about to go do this movie where I play a down-and-out drunken detective. It's a reverse telling of Peter Pan. I'm James Hook and Peter Pan is abducting young children so I have to go figure out the mystery. I'm trying to mix it up and play different things-just trying to challenge myself as an actor. I probably just see myself fading away from now on.

As in, you're tired?

I just think I'll just go make some movies and see what happens. But I think it's probably over for me.

I hope not. Right when the rest of the world is catching up?

I remember reading an article about In the Company of Men in Vogue Magazine when I was 16 and living in Texas and thinking, "I need to move to a town that would show that movie." I was just getting seriously into film, and it was your first film—something about that moment has always made me follow your career.

I remember that article. That was the genesis, that was the beginning. And it's gone downhill from there. [Laughs]