close
INTERVIEW: With his Human Centipede sequel, Tom Six is out to prove he's the sickest of the sick

Tom Six On What Inspires a 'Human Centipede' Sequel 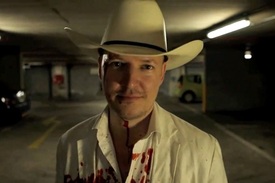 There's no other way to say it: writer-director Tom Six is twisted. After his auspicious international debut with the sick The Human Centipede (First Sequence) in 2009 in which a doctor sews together three victims orifice-to-orifice, he returns this week with The Human Centipede 2 (Full Sequence), a sequel which posits that the original film was just fiction, but has now inspired a real (and really graphic) copycat crime by the movie's biggest fan. Most sinister of all, in person Six comes across as perfectly well-adjusted, charming and friendly, making the dark depths of his soul even more mysterious.

Boxoffice sat down with the Dutch director in Austin the morning after he premiered The Human Centipede 2 (Full Sequence) at the genre film festival Fantastic Fest (where attendees received vomit bags and breath mints at the door) to ask about his, um, creative inspirations and what movies he likes to watch.

How early in the process did you come up with the meta-movie idea where this film acknowledges that the first was actually fiction?

I had the idea of having a much bigger centipede where you do see the shit and the gore and everything, but I had that idea lingering in my mind—what if a guy copies that film? And then at festivals all over the world, people asked me, "What if a maniac out there copies your film?" And then I knew for sure, this was the way Part Two must be, because it's a fear everybody has. And that's so cool, I think. I have never seen a film that's a sequel where the first one is just a film. I've never seen that before, and I like that idea very much. Usually they just continue the story.

If this film takes place in the real world, how much do you think about logical considerations like how long the main character's victims go without food?

As a writer, you try to apply logic in a story, but I think that's the magic of moviemaking—that you have to make choices about what you see and you don't see. And that's why you skip things. Like in Part One, how can the Human Centipede move? That's not logical if you think about it, but as an audience, you don't care, or you don't really notice that. But in almost all films there's not logical things happening time lapse-wise and stuff.

In this film, there are a couple of big sequences away from the centipede stuff—do they fit into the themes or are they just cool ideas you worked into the story?

No, it's just the way my mind works when I'm writing the stuff. I visualize it, I visualize the story, so I don't go about it in a rational way, I just follow the characters and I think, okay, that guy gets his victims from a car park, and I want a certain kind of victim in there. I wanted another character to return and show a totally different side of him, so that's why that scene is there. For me, it's very logical.

The first movie was a very black comedy. Given the intensity of the violence, how much is this film meant to also be a comedy?

For me, it's the same, because it's coming from my eyes, and I have a very strange sense of humor, very dark humor. This one has exactly the same amount of humor in it, but I don't do it intentionally, like "I want humor now." It's just that the way I write automatically comes with humor. So I think Part Two is just as humorous as Part One, but that's in the eye of the watcher, because I heard people laughing during the screening yesterday, and other people are very serious. But it has the same amount of humor in it from me.

Did you have a different outlet for this kind of personal expression before you became a filmmaker?

I was lucky enough to work on the first Big Brother in Holland, and I was one of the directors involved with that so I set it up with the camerawork and stuff like that. And that became a phenomenon, and that was really fascinating for me: to watch people take a dump, and have a camera watching them, take showers, and do all of the things you don't normally see people do. So I had a really good time making that show—it was fascinating.

Do you like watching more conventional movies, even if you don't want to make them yourself?

Oh, absolutely. I see so many films, so many different ones. Like Borat—I love that film. I laughed so hard. That's my kind of film. Also, I love the films from Lars Von Trier, but I also went to Horrible Bosses with Jennifer Aniston, and I really loved that film. So it doesn't matter what it is, if I have a good time watching it.

Are there filmmakers or films that you feel are exploring the same territory you are?

Lars Von Trier makes a little different films, but he's also a daring, daring director who comes up with new ideas and he isn't afraid to be controversial. So I really love his way of working. And David Cronenberg in the early ‘80s, I loved his work. Now it's a little different, but then he was really creating something new. So these two people are really influences.

Do you have an all-time favorite film? And why?

I think it's Salo, by Pier Paolo Pasolini [about four rich fascists who kidnap, torture and kill 18 teenagers]. When I saw that film, it did something to me. It's crazy, you become angry with it, fascinated by it, and it's made in the ‘70s, so the guy had real balls to make that in that era, of course. And as a filmmaker, you know it's all fake and they had lots of fun on the set, but that's probably the only film that did that to me. It was an uncomfortable, strange feeling, and that's good.