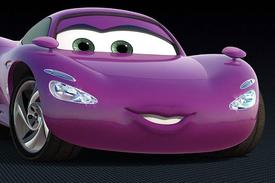 Emily Mortimer has conquered most of the challenges Hollywood throws at actresses, from playing indie leading ladies to mainstream love interests to thriller and horror heroines. In Cars 2, she checked voice actress off of that list playing Holly Shiftwell, and English spy who gets embroiled in an international plot that only the series' feckless sidekick Mater (Larry the Cable Guy) can untangle. Boxoffice caught up with Mortimer last week via phone to talk about her work on Cars 2, which is now on Blu-ray. In addition to discussing the differences between voice recording and regular acting, she examined the integrity of the Cars world, and hinted at how soon she would be ready to return for another installment.

Given that you didn't meet Larry the Cable Guy until you started doing press for the film, how surprising was it to see the back and forth between your characters? And how difficult or easy was it to adjust to an acting challenge where you don't have your physicality to communicate things about your character?

It was very incredible seeing it, these two people coming together on screen who never have gotten to meet. That was all the sort of magic of John [Lasseter]. But what I was very taken with when I was doing the recording was how much of a kick John Lasseter gets out of the recording process, and how much he loves and empathizes with all of the characters, but especially with Mater. So I had the feeling when I was reading with him that he was sort of channeling Mater in some way, and that the whole film in some way is John channeling Mater, or Mater channeling John. There's a feeling of this sort of huge hearted guy who at first may not look like the most sophisticated person in the room, but he actually turns out to have more brains and charms than everyone put together. I think John is that person too; he was very at ease with that character, so when he was reading—because he reads the other lines—it was in some ways less difficult or challenging than you might think, because he was there the whole time with me really putting it all into the other lines. So you could definitely feel how the scene was going to work and everything from him.

Because Cars is probably among the most kid-friendly of the Pixar movies, how much do you think about what part of its story or characters relates to adults?

I didn't really think of it like that. I didn't really think of it in terms of kids versus grownups, or who I should be playing to. I think in a way I just felt it was my job to just be as real as I could, which is pretty much what I always think. And given the huge unreality in terms of the process of making this film, it was challenging just to say the lines how I would say them, if were a car flying through the air trying to stop an international crime mystery. I just said the lines how I would say them, and I think the balancing act was that you need to make it bigger—it's almost like you need to fill the room. It's like doing a play almost more than doing a film, the way you use your voice. And at first, I was very sort of quiet and low-key, and very quickly realized that doesn't sort of translate, and you have to sort of throw your voice a little more, so it's a bit more like you're performing it to a crowd rather than just one person and a camera. So I was aware that there was a way I used my voice than it would be if I was just doing a regular movie, and that was that it was sort of bigger than it would have otherwise been. But at the same time, I was also keenly aware that within the context of the film, I just had to be sort of real and myself and sort of not try to put too much focus in a weird way. It's not a comic turn, that part; she's a sweet girl doing her best to be a good spy, and it didn't need too much attention called to itself. Just to be there and be present and be as real as you could given all of the challenges of being real and just kind of get on with it, and that would probably be the best way through it, rather than trying too hard to do something sort of complicated and attention-seeking. I guess that was my way through it—but I don't know if that was the right way (laughs).

How much do you have to just embrace the world created in Cars, and how much were you curious about how Cars became the dominant species on this planet?

It's funny—I tend to be a real stickler for plausibility, but it's generally when I don't trust the people who are making the film or whatever it is that I'm in. I get really obsessed about trying to make sense of it, because I feel like in the hands of people you don't necessarily trust, you want there to be a world that makes sense in and of itself, even if it doesn't jibe with the world as you know it. And when you don't feel that there is that, as an actor it's a very disconcerting feeling, and I'm always saying, "but that doesn't make sense! Why would she do this?" and so on. But then you meet the Scorseses of the world or the Woody Allens or the John Lasseters, and the weird stuff that goes on inside their head is that they have the ability to completely sort of transfer that onto the screen. And you stop asking questions, because it does make sense—it makes sense to them, and therefore it makes sense to you, and you're just so pleased to be invited into that crazy universe and be part of it. And it's a wonderful feeling, not having to ask those questions, but just being grateful to be there even if it doesn't quite add up or make sense, because it certainly does add up and make sense to them. It's a great privilege to work with people like John because I think it was Samuel Taylor Coleridge who said his definition of genius is being able to carry on a child's imagination into the man. And most of us sort of lose our imaginative impulses when we grow up, but with somebody like John, he's kept it intact. That in combination with a huge intellect and incredible skill, he's been able to sort of manifest his imagination in way on the screen that is amazing and awe-inspiring and wonderful to be a part of. So I guess the short answer is, you don't need to answer those questions when you're in the hands of a genius.

This sort of opportunity usually seems to lead to lots of others with Pixar—sequels, video games, etc. How much of that is on the horizon, and how eager are you to jump into that?

They're so accommodating, it's the easiest job I've ever had as well as being a sort of pleasurable one. They come to you a lot of the time, wherever you happen to be; I think I recorded it in like three different cities—near where I live, in London where I was filming at one point, and then I got some in San Francisco. So they're very accommodating, and it's never more than a couple of hours per session, so it's very unstressful to say the least. And I will definitely make myself massively available at any point to do whatever they ask. In fact, in November John's getting a star on the Walk of Fame, and I'm going to go see him put his hands in the cement and support him in that, and I'm so delighted to have been invited to come see him again. I would go to the ends of the earth for him.