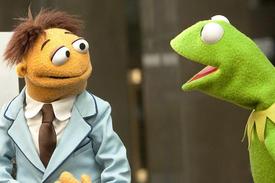 Among the fascinating things I learned when I sat down with Nick Stoller, cowriter of The Muppets alongside old buddy Jason Segel, is that he actually bought the '80s robot from Rocky IV. And his continued rage that the robot never worked is part of why it makes a cameo in the Disney film, which is an odd departure from Stoller's steady gig directing decidedly adult comedies like Forgetting Sarah Marshall and Get Him to the Greek. But as I saw while talking to him, Stoller's aim to bring what he calls an "essential humanity" to this story of pigs and frogs—plus a willingness to indulge in some very silly ideas—made him the ideal choice. Stoller and I talked about how writing for kids isn't that different from writing for grown ups, and the shocking answer to the question: "Where do Muppets come from?"

You come to The Muppets not from a kids background, but from work like Forgetting Sarah Marshall and Get Him To The Greek—R-rated comedies aimed at adults.

You know, it felt like a natural process. I've done a lot of writing—all comedy but different types of comedy—and even with Greek and Sarah Marshall, I try to bring an essential humanity and sweetness to whatever I'm working on, and that, I think, is what keeps anyone interested in a comedy.

So it didn't require you to rethink how you approached the jokes?

Whatever the story is speaks to what the jokes will be. With Sarah Marshall, we had our initial meeting with Universal and they asked, "Does this have to be rated R?" And I made the point, "No one gets dumped and doesn't curse, it has to be R." But with Muppets, they don't live in an R-rated world, so it wouldn't make sense if anything R-rated happened. Also, as a comedy writer, I speak Muppet fluently.

Obviously, there's the puppet show at the end of Sarah Marshall—

Definitely, and speaking Muppet is probably the first thing you learn as a comedy writer.

When did you decide to take on the Muppets?

After Sarah Marshall, Jason was having a meeting with Disney—that was four years ago—and they asked him what he wanted to work on and he said, "What are you doing with the Muppets?" They were like, "We don't know...?" I mean, they own so many brands. He called me right after that meeting and we riffed out basically the whole movie.

How many different versions of this story did you go through?

The plot of the movie from our first phone call was almost exactly what you saw. Stuff was changed during the writing, but we thought from the beginning that they have to get the studio back. We knew that the villain was laughs always going to be called "Tex Richman" and we tried to think of the archest, dumbest "evil plot" we could come up with—and there being oil under the studio was our favorite.

Let's talk about Walter for a second. Is Walter meant to be Jason Segal? Is Walter you?

From the beginning, we wanted there to be kind of a superfan, a stand-in for Jason or me. He's anyone who's been wondering for the past 10 years, "Where are the Muppets?" or like "I want a Muppet movie, why aren't they making them?" So Walter is that super fan. His personality has always been the same in every draft of the script. His name's always been Walter. He's really enthusiastic and faints when he sees Kermit. The only major change to his personality we made was that we dropped this joke that every time he gets nervous he yells "Peanut!" Which is kind of a weird thing. We liked it, but ended up cutting it out for various reasons.

And with him, you've answered the eternal question: "Where do Muppets come from?" They're clearly born from human women.

Yeah! [Laughs] Actually, him being Jason's brother came along in the last year, year and a half. It's kind of a rip-off of a joke that's in The Great Muppet Caper, where Kermit and Fozzie are twin brothers and they're like, "Don't we look alike?" But then you see their parents, who are green bears. We kind of played around with that idea in Walter and Jason's relationship.

The original Muppet Show back in the '70s had a kind of old-timey, vaudeville throwback feel. When you reveal Walter's talent—he's the best whistler ever—it fits. But why whistling? Did you ever think that maybe he did impressions or played the xylophone?

It wasn't the first idea we had. I can't remember what the first talent we came up with was. We knew that he needed a talent. For a moment, it was that he's talented at organizing.

You see that a bit in the film.

Yeah, but it was just hard to figure out how to put that in the show and it's kind of a hard talent. Whistling seems funny because anyone can whistle, so it doesn't seem like something you'd become the world's best at. We had a scene that was cut out where they have one dollar left to win the studio and after Walter's performance, Statler dismissively says "Well, that was worth a dollar," and throws a buck on the stage.

SPOILER WARNING
Why'd you end up going with the Muppets losing the studio in the end and then having Tex Richman having a change of heart, which you implied during the ending song and credits?

It seemed like this sweet idea to us that it's not the studio that's important, it's the Muppets themselves—them as a group—which is shown at the end when everyone gathers on the streets outside to celebrate their return. Having them lose the studio in the end seemed like the best way to show that, and it gave us kind of a bittersweetness for the ending too. But then we tested the movie, and it seems like every single person in the audience was like "Uh, did they get the studio back?" [Laughs]

Maybe it's because they also lost the rights to the name "The Muppets" as well?

Yeah, there's that too, so we realized "Okay, we need to resolve that."

You obviously needed to get the core group back together, but how did you figure out which were the characters you were going to bring into the story—not only from the original but the ones that maybe aren't from that core group?

That was the hardest thing about writing the script, figuring out to service all the characters. In most movies there's one or two, maybe four core characters to deal with. This having so many—at least 15 characters—you know you have to service Kermit, Gonzo, Miss Piggy and Fozzie a little bit more than the others. So we would kind of punch to different people or different Muppets for certain jokes. Invariably, you'll leave a few favorites behind, and of course we have our own. James [Bobin, the director] loves Uncle Deadley and Bobo the Bear, so we wanted to have them there. But we also brought a few obscure ones to the fore.

There's a lot of funny stuff in this script: meta humor, puns and straight up jokes. What's your favorite joke?

My two favorite jokes that I brought into the script are "travel by map"—I'm very proud of that joke—and '80s robot.

Totally, '80s robot is hilarious. He comes on and you think he's going to be a one-note punchline, but nope.

I wanted him to be the only character that everyone is always annoyed at. It went farther in the script where they're constantly saying "Shut up, '80s robot!" and "Enough out of you, '80s robot!" It was funny because we could have fun beating up on him. Because honestly, I don't know if you ever had one, but those things never worked.

No, actually my experience with '80s robot-style robots comes from Rocky IV. I would have loved to have had one—

They don't work, they never worked!

What was their purpose?

To carry soda. And they couldn't even do that.

They were terrible, seriously.