Everything you always wanted to know about Brazil (but were afraid to ask): An introduction to Brazil through film 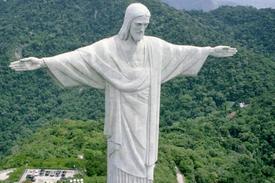 Brazil has been basking in the Hollywood spotlight lately, having been featured in three big-budget blockbusters in the past few months: Rio, Fast Five and now Twilight: Breaking Hymen Dawn. But Brazilian cinema's time in the sun with American viewers seems to have come and gone with everyone's favorite movie during sophomore year in college, City of God. In fact, the last year a Brazilian film garnered a foreign film Oscar nod was back in 1999, for Walter Salles' Central Station. The true art form of the Brazilian masses is and probably always will be the telenovela, since movie tickets are relatively expensive and pirated copies of new releases can be found on just about any street corner for a dollar. But the Brazilian film industry, based in Rio de Janeiro and São Paulo, has flourished in the past two decades, flooding its domestic market with everything from crime dramas, cheesy romcoms, family melodramas, experimental documentaries, and adaptations of classic Brazilian novels. Here are ten great post-City of God films (all but two available via Netflix) that reveal interesting aspects of life in Brazil beyond wisecracking parrots, drag racers and honeymooning vampires:

Race
Brazil is a black-majority country—or it might be if it could decide who counts as black. Most Brazilians will admit, proudly or in a whisper, that they have at least one black grandmother tucked away somewhere in their family tree (a consequence of sexual violence towards female slaves, who weren't emancipated until 1888). But those considered light-skinned blacks in the US tend to identify as "mulatto" or "brown" in Brazil—not black. Once Upon a Time in Rio, a tragic romance between a rich white girl and a poor black boy, sets Romeo and Juliet in present-day Rio, with the warring Montagues and Capulets replaced by frigid rich whites and distrustful poor blacks. As this allegorical film shows, blacks and whites in Brazil, divided by the chasms of race and class, remain deeply suspicious of one another even though their lives are much more interconnected than they realize.

Class
Brazil rivals India for the dubious honor of having the greatest income inequality in the world-think the 0.001 percent vs. the 99.999 percent. While millions live on less than a dollar a day (that's $365/year), the Brazilian megarich flock to their fortress-like shopping malls in helicopters to avoid traffic jams and possible kidnappings. In the lyrical but heartfelt meta-documentary Santiago*, director João Moreira Salles (brother of that Oscar nominee Walter Salles, who also helmed The Motorcycle Diaries) explores why he failed in making a documentary about his family's charmingly eccentric butler nine years ago, despite shooting more than 18 hours of film. After Santiago's death, Salles revisits the footage he shot nearly a decade ago and slowly comes to realize that as an inexperienced director and "the master's son," he had sabotaged his own efforts by imperiously ordering around his subject-as he had done all his life-instead of coaxing a natural interview out of him.

Political Corruption
Power corrupts, anywhere and everywhere. But few countries can boast a politician as venal as Wallace Souza, a state legislator and TV host, who made international headlines in 2009 when it was discovered that he had ordered the brutal murders of strangers so his cameramen would be the first to "stumble upon" the crime scene and capture the gory images. The gritty Almost Brothers, by City of God-screenwriter Paulo Lins, portrays the decades-long, prison-born friendship between a middle-class white activist-turned-politician and a poor black criminal-turned-drug lord. Almost Brothers also argues the widely held theory that the right-wing military dictatorship of the 1970s inadvertently exacerbated crime rates by imprisoning Marxist activists alongside common crooks. The well-meaning activists schooled the criminals in police-resistance techniques and the bad guys used their tips to get even worse.

Crime
The combination of extreme racial and economic inequality and government corruption has produced a large criminal underclass and a sky-high homicide rate: proportionally speaking, more people die on the streets of Rio than they do in war zones. At present, Rio is preparing to host the 2014 World Cup and the 2016 Summer Olympics, in part through displays of police power. Just this past weekend, 3000 police troops entered the city's largest favela, or shantytown—that's one officer for every 33 people. But as Mexico's experience in the last few years with the drug cartels has proven, harsh police crackdowns backfire, a conclusion also endorsed by the violent, psychorealist Elite Squad. Elite Squad depicts the institutional corruption and existential malaise in a special forces unit of the Rio military police and illustrates that there are huge areas in Brazil's cities that the police have virtually no control over-and what little control they do have comes from bribing the drug dealers who essentially govern the favelas. (Note: Elite Squad 2 made its US debut last weekend and is the Brazilian nominee for the Foreign Language Oscar.)

Multiculturalism
Brazil is home to people from all over the world, with large communities of immigrants from Western and Eastern Europe, East Asia, and the Middle East residing in its cities. For example, over a million ethnic Japanese live in Brazil—the biggest Japanese population outside Japan—and the resultant cultural mixture has produced thousands of Brazilian mangaphiles and geisha-wannabes. Wistful and lightly comic, The Year My Parents Went on Vacation explores the Hasidic community in São Paulo through the eyes of a 12-year-old boy whose leftist parents flee when the military dictatorship begins imprisoning and torturing political activists in the 1970s. Although the little boy does not know Yiddish, the language of the community, he manages to get along with his new Jewish, Arab, and Greek neighbors by speaking the true international language: soccer.

Gender
There are definitely worse places to be than Brazil if you're a woman. Brazilian women have had the vote since 1932 (only 12 years after American women), the 1988 Constitution guarantees equal rights for women, and last year, the nation elected its first woman president, Dilma Rousseff. However, domestic abuse, sexual violence, double standards, and gender-based wage disparities are still widespread problems, especially for poor women. Love for Sale centers on a young single mother who heads back home from the not-so-glamorous city to the poor, rural town where she grew up. Given the dearth of opportunities in rural areas, especially to "cast-off women," the pragmatic but hopeful protagonist finds female empowerment in prostitution. Hey, you gotta find it where you can.

Gays
Despite being a predominantly Catholic country, Brazil is host to the world's largest Pride Parade, with last year's celebrations in São Paulo attracting over 3 million participants. Although homophobic attacks are on the rise, things are definitely looking up with the Brazilian Supreme Court unanimously instituting gay civil unions earlier this year and the majority of Brazilians considering homosexuality "natural." Loosely based on the life of a drag queen/bandit/street fighter/father of seven, Madame Satã (Madam Satan) is a wild rush of a biopic. Admittedly, it's not the most representative film about being gay in Brazil, but it's a good sign that a queer man has not only reached the status of national icon and folk hero, but also the most popular legend in Latin America: the outlaw.

Geography
The landmass of Brazil is larger than that of the continental U.S. and encompasses the famous beaches of Rio, the dense jungles of the Amazon, the famine-prone deserts in the Northeast, and the ice-capped mountains in the South near Antarctica. Outsiders are understandably lured to the chic beaches in Leblon and Ipanema (both in Rio), but Brazilian filmmakers have been drawn for decades to the socially and economically "backward" Northeast. Taking place in 1942, the road trip movie Cinema, Aspirins, and Vultures follows two travelers—a German with a mysterious past and an ornery Northeasterner escaping the tedium of rural life—wandering around the Northeast showing movies and selling a miracle drug, aka aspirin. But the outside world slowly intrudes even into the Northeast. When Brazil enters World War II, the German must return his homeland or surrender to a concentration camp in São Paulo. (Not-so-fun fact: The Brazilian government drew up plans to intern its Japanese immigrant population like the Americans did with theirs, but officials gave up when they realized there were simply too many Japanese to round up.)

Environment
Brazil is a biologist's heaven and an environmentalist's hell. Rapid and illegal deforestation of the Amazon is probably the country's greatest environmental disaster with loggers, cattle ranchers, miners, farmers and politicians all chomping at the bit to clear trees, endanger entire species, and contribute to as much as 10 percent of the global climate change. Less catastrophic but just as important are the country's famous landfills, one of the largest of which was featured in the Oscar-nominated documentary Waste Land. This beautifully shot doc shows Brazilian-American artist Vik Muniz collaborating with landfill workers to create large-scale mosaic portraits from recycled garbage.

Food
Two "superfoods," açai and coconut water, have recently become trendy among health-conscious foodies and the fashionably yogic. However, Brazilian cuisine—a regionally diverse mélange of Portuguese, Italian, and West African influences and indigenous fruits, vegetables, and grains-has much more to offer. The lighthearted Estômago [Stomach]: A Gastronomic Story* showcases the breadth of Brazilian cuisine through the story of a chef who softens his arrival in prison by winning over his new cellmates by cooking for them and introducing them to delicacies like fried ants and raw meat (carpaccio). The film also envisions how this large, divided nation of men and women, black and white, rich and poor, gay and straight, native and immigrant can come together through great food.

* These films can be "saved" on Netflix, but aren't yet available. Try your local, indie video store.