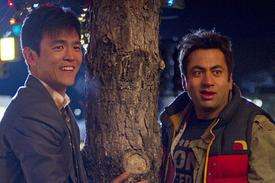 I met Harold and Kumar in college. My Afghani-Pakistani friend Sabeena, a brilliant writer and queer Muslim activist, introduced me to the toking duo by inviting me to watch what sounded like a D-grade stoner flick at her house while smoking some skunkweed. (Western Massachusetts is known more for the quantity of its potheads than the quality of its pot.) At the time—and even more so now—Harold (John Cho) and Kumar (Kal Penn) were heralded as ethnic saviors, proof positive that not all Asian Americans are robotic workaholics devoid of creativity and sex appeal. Through the haze of the skunkweed, I saw that Harold and Kumar subverted stereotypes about Asian Americans-well, Asian American males, anyway, who Hollywood regularly portrays as meek, asexual nerds or inscrutable but well-meaning kung fu masters. But as a female Asian American viewer, my first impression of Harold & Kumar Go to White Castle wasn't identification—it was disappointment tinged with disgust. I found myself resenting White Castle for seducing me with its Asian Asian protagonists (and the fine Cho and Penn), then squandering my interest by flashing boobs, telling poop jokes and extolling the delights of homoerotic male bonds.

All three Harold & Kumar movies—Go to White Castle, Escape from Guantánamo Bay, and the latest installment, A Very Harold & Kumar 3D Christmas—stick to the formula of stoner movies: two dudes + weed = misadventure + bromance. In last week's interview, Jon Hurwitz and Hayden Schlossberg, the creators and writers of all three H&K movies, identified another essential component of their R-rated scripts: nudity. Gratuitous shots of boobs and bush are more readily on offer in the three films than blunts at a dorm party. The nudie shots, toilet humor, and dudetastic sensibility add up to a casual sexism, even misogyny, that permeates the H&K films like the smell of, well, you know.

How great is it to watch Harold & Kumar as a woman—especially an Asian woman? Start with White Castle, which presents Harold with a choice between two female stereotypes: the nerdy, four-eyed Asian girl, Cindy Kim (Siu Ta), and the hot Latina chick, Maria (Paula Garcés). He goes for the Latina chick. Fine, follow your heart. But in Escape from Guantánamo Bay, Cindy's taken down a further notch—she reportedly gives Harold's pal Goldstein (David Krumholtz) a blumpkin, or a blow job while the dude takes a dump. By Christmas, she doesn't exist at all—and neither do any other female Asian characters.

Then there's White Castle's ickiest gag, Kumar domestically abusing his bag-of-weed wife. Kumar spots a bag of weed as big and fluffy as a pillow at a police station and imagines himself falling in love with and marrying it. He stays up all night studying and Bag of Weed, dressed in a pink, fuzzy bathrobe, brings him a cup of coffee. Kumar takes a sip, spits it out, slaps Bag of Weed across the face (well, where it would have a face), and yells, "Bitch! Where the f--k did you learn how to make coffee, you f--king whore?" Bag of Weed starts to cry, and Kumar comforts it without apologizing. The scene is a parody of Raging Bull, but the fact that it's referential doesn't make the scene any less misogynous (or more funny). Kumar's violence is somewhat dissipated by his wife being, well, a bag of weed. But the film still asks its viewers to laugh at a scene of domestic violence and identify with a wife-beater, albeit only in Kumar's imagination.

The sequels Escape from Guantánamo Bay and A Very Harold and Kumar 3D Christmas gave Hurwitz and Schlossberg room to flesh out their female characters—an opportunity they declined. The aforementioned hot Latina chick, Maria, turns out to be a model (eye roll). She's also boring as hell, because Hurwitz and Schlossberg don't bother giving her a personality beyond great hair. In all three films, Maria is nothing more than a ruler to measure Harold's masculinity when it's repeatedly questioned. In Christmas, the movie in which she has the most screen time, despite her increased presence on the screen, she's actually less important than ever: her character is merely the premise for the blooming of another bromance, that between Harold and his scary father-in-law Carlos (Danny Trejo).

Kumar's love interest, Vanessa (Danneel Ackles), introduced in Escape from Guantánamo Bay, fares a bit better. Vanessa has a bit more on her resume than being a beautiful cipher: she used to be a pot-smoking manic pixie dream girl, but became affianced to a Young Republican douchebag after she dumped Kumar. She's also bad at math: she and Kumar meet when she struggles with a calculus problem that Kumar learned to solve in the sixth grade. But like Maria, Vanessa serves only to gauge Kumar's maturity. At the beginning of Christmas, she shows up at Kumar's door several months after dumping him for again and announces she's pregnant. Kumar fumbles the news, but at the end of the film, she unconditionally takes him back after he patches his relationship with Harold. (Bros before hos!) Actually, she did have a very shrewd condition for taking back the über-slacker father of her baby: he has to keep smoking pot.

The Harold & Kumar films aren't the only comedies that target male viewers, crack sexist jokes, and use female characters as props or status symbols. Hollywood films, no matter how quirky, are rarely a great place to look for nuanced portrayals of women (or racial minorities or gays or the poor or basically most types of people). But as a female Asian American viewer, it's tempting to want more from Harold because the films are considered an important milestone in Asian American cinema (if a trilogy of films written and directed by three white dudes counts as "Asian American movies," which maybe they do). Harold & Kumar isn't supposed to encapsulate the variety of Asian American experience, nor could it possibly do so. But I can't help being disappointed in Hurwitz and Schlossberg for prioritizing poop jokes and boob shots over female characterization—for supposedly ground-breaking comedies, watching them still feels like getting the finger and being expected to laugh.