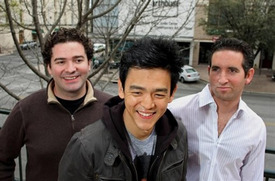 When Jon Hurwitz and Hayden Schlossberg were in high school, they became friends. When they were seniors in college (Hurwitz studied investment banking at Penn, Schlossberg studied law at the University of Chicago), they resolved to switch gears and do something creative. And when they graduated, the two moved to LA where they became roommates, writing partners and hot, young Hollywood commodities when Harold & Kumar Go to White Castle became an unexpected demi-hit. Though they've charmed their way into new projects (like the upcoming Pie sequel American Reunion) they've stuck with the stoner dudes through two more Kumar comedies and have wild ideas for more—Harold and Kumar: Black History Month, anyone?

How old were you guys when you sold your first script?

Jon Hurwitz: We were right out of college. We sold our first script when we were seniors in college. It was a different script called Filthy. We were 21. So then we moved down to LA and were, you know, 22 together in Los Angeles. And our lifestyle was similar to Harold and Kumar's although the difference for us was we both worked at home. And we lived together. We worked together. We would have our long days at work busting our asses to try to solve that next thing. And then at night we would "get hungry" and go out and go on an adventure for burgers.

Hayden Schlossberg: We'd "get hungry" quite a bit. Every now and then we still "get hungry."

I would hope so.

Schlossberg: Not as much as we used to...

Sounds like some of your own personal experiences went into this film.

Schlossberg: I think it's our experience watching Christmas movies that comes into our writing. You know, we loved A Christmas Story. Growing up, you'll watch a Christmas movie and there's a warmth that comes out of the movie, whether it's Home Alone or even Christmas Vacation. There's this Christmas energy and vibe that is so warm and fuzzy, and it felt like Harold and Kumar are so outrageous that having them in a Christmas movie would be completely sacrilegious and outrageous.

Hurwitz: That's the area where it does come from true life. It was a very real thing. We found that there are certain people, as you become an adult, who sort of head down a path where you become a "super-adult," and you're really focused on adult things and you lose some of yourself. We always believe in the child within, and I think Harold in this movie has sort of gone a little bit off the rails from a fun standpoint. And Kumar, we have friends who are like Kumar, who are still harping on the same thing they did when they were just getting out of college and haven't progressed and haven't taken adult life seriously and done anything with it. We've seen friendships disappear—people who we used to hang out with who we no longer do. But every time that you end up seeing each other, you find kind of who you were when you were young again.

You guys have been friends for a long time. When did you first come up with these characters of Harold and Kumar?

Schlossberg: While we were in college we decided to write a screenplay, and at the time, there hadn't been a great R-rated youth comedy that had come out. We wanted to write a movie that just had high school or college age characters where they are actually the way those kids are. We had a lot of Asian and Indian friends growing up, and so we made sure in that first screenplay, even though it wasn't a Harold and Kumar movie, to have Asian and Indian side characters, and we actually named them Harold and Kumar: one because we had a friend named Harold at the time and another friend whose brother's name was Kumar. We had sold a couple screenplays but nothing was getting produced, and it just seemed like we wanted to write something that was just different from every other youth comedy that was out there at the time. If we put the spotlight on Harold and Kumar, it'll feel different—we don't need to write it about the Asian-American experience. We can write a movie starring Asian characters that's just about something we'd go through.

Hurwitz: Well, that was the thing. The whole point about Harold and Kumar was that they're no different from us. We were like, "What's a movie that we can write that's personal to us that we think could bring big laughs that no one else in town is writing?" And that's where Harold & Kumar Go to White Castle came from.

Although the movies are comedies, there is an interesting statement about race, ethnicity, and identity. The characters really represent this larger group of first generation Americans from different cultures, who are randomly put together in dormrooms and bond over cheeseburgers and weed.

Hurwitz: We just sort of thought that the Asian and Indian-Korean and Indian—those were the characters that were not being portrayed on the big screen in a way that reflected society, the society that we knew. We thought it would be really fun to pair the two of them, rather than have, you know, a white guy and an Asian guy or black guy and Indian guy. We just figured an Asian guy and an Indian guy are two unrepresented minorities.

Schlossberg: If you look at the schools that we went to, they were so multicultural. When you looked at youth comedies, every high school comedy or college comedy was just a group of white guys. If you look at American Pie, it's all white guys. So it just felt like that's not real. In the world that we grew up in, if you were to have four or five friends, there'd at least be one Indian guy or Asian guy or black guy in the mix—if not in the majority. So it was really just that we saw a disconnect between reality.

The movie is definitely a stoner movie. What are some of your favorites?

Schlossberg: Half Baked is one of my favorite stoner comedies. The Big Lebowski.

Hurwitz: There were no great stoner comedies when we were growing up—

Schlossberg: We didn't set out to be guys who created a stoner franchise, although we did when we wrote Harold & Kumar Go to White Castle. But when we entered screenwriting, it was really, like, we just trying to write movies that would be crowd pleasers. I think that what's fun about Harold and Kumar is there are fewer rules.

What are the hallmarks of a great stoner film?

Hurwitz: Yeah, animals are usually a part of it.

Schlossberg: The first movie has a cheetah. The second movie has a deer, you know. The third movie has the reindeer. There's all sorts of—

Animal death. Very important. Neil Patrick Harris, how involved was he with writing the movie?

Hurwitz: We write all the Neil stuff, but we collaborate with him. It's one of those things where we'll tell him our ideas, he'll respond to them, we'll write stuff up, we'll send him pages, he'll react to the pages and we'll discuss. It's really just a discussion, but we generally come up with the bulk of the ideas with the stuff with Neil, and he tells us, "Hey, what if we do this?"

Now it's time for the lightning round. I'll give you a holiday, and you give me what would happen in that Harold and Kumar movie. Ready?

Schlossberg: They would have to hide eggs in a weird place, I think. In an uncomfortable place.

Hurwitz: That's the one where they finally-

Schlossberg: They finally ditch the girlfriends and get real and start making out with each other.

Schlossberg: I think Frederick Douglass gets involved and they all kick ass.

Hurwitz: They just all-they go on a shooting spree.

Schlossberg: It's Frederick Douglass vs. Neil Patrick Harris, like Mothra vs. Godzilla.