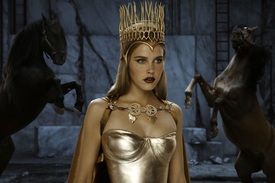 Isabel Lucas is best known for playing the sinister model who seduces Shia LaBeouf's Sam Witwicky in Transformers: Revenge of the Fallen. Admittedly, it didn't give her a whole lot of acting challenges, but boy did she make an impression. Now Lucas is starring in Tarsem's sumptuous, mythological odyssey Immortals, where she plays none other than Athena, the goddess of wisdom. Boxoffice asked Lucas about how to create a humanized version of a literal god while staving off the silliness of chain-mail and golden breastplates.

Playing a god is a big acting challenge. How do you juggle being omnipotent and at the same time giving the role a sense of humanity?

I really like that question because it is somewhat intimidating, and an incredible honor and opportunity at the same time, being able to play a goddess. To me, I like to write diaries for my characters to help me plan and connect with my characters—for Athena in particular—to find what is human and relatable about her so that I could connect with her and her wants and desires. Also, it wasn't really necessary to do much research on the actual mythology because this is an original concept, but to research the archetypes of Athena was really helpful.

The gods' behavior in the film seems very influenced by human beings, as if they aspire to be them. Did that give you license to make Athena more vulnerable?

I think it's more that they empathize with the humans—they really feel and care for their situation and really have the best intentions. And that's why Athena in particular wanted to intervene and help the humans. They wanted to be there to help them, but they feel sort of helpless and disconnected from them.

Actresses unfortunately can be cast sometimes more for their physical attributes than their acting abilities. Coming into this film that's obviously very visual, were you concerned at all about making sure your character was complex and challenging enough?

Yeah, of course. I think there's always got to be something meaty in the character so you just want to take it on, and I hardly think there's any meatier character than one like the goddess Athena. She is the goddess of wisdom, and Tarsem encouraged me to play her a lot lighter and more childlike than how she would ordinarily speak, which was very stoic, or perhaps as a middle-aged woman. So it was an interesting choice for Tarsem to cast much younger—perhaps it was to see the seed of what the gods became—and I thought that was an interesting choice.

How much of the film did you experience on set and how much was filled in via CGI and special effects afterwards?

I do think that we had a fair bit of green screen. I mean, obviously it was all going to be green screen except for the marble setting, so it was necessary to make the imagined sets and the imagination really clear and specific about what the surroundings were in order to make it real for us.

How would you describe Tarsem on set? He comes across as a mischievous, light-hearted guy, but is he the same while shooting?

He's pretty much the same, I think. He's like an orchestra conductor, and a kind one—he's a purist. He's very easy to communicate your ideas and questions to. He's very good with actors, not only just amazing technically. There's so much passion and humility and he's just incredibly funny—always funny. He'd run around and just hug people, like he literally was hugging everyone. He was a lot of fun to be working with. He came on and he was nonstop all day long, and he was always walking and pacing and thinking, just juggling everything. And he was so sweet and pleasant at the same time that really you find yourself emulating that sort of energy, and you want to sort of meet that. He inspires that in an actor.

What you do you do to get yourself mentally prepared for the fight sequences? What are you thinking about beyond the choreography and physical preparation?

Well, the fight training was all sort of done an hour or two a day for two or three weeks, and it was martial arts people fighting, and I hadn't done anything like that before. In Daybreakers I'd done a little bit of muscle training and things like that, but nothing this specific and choreographed. So it was really a great challenge, but when you're actually on set and shooting a sequence like that, it all happens over a very, very long amount of time, because it's a lot of setup, and they actually encourage you to do it a lot slower. It's not all about the speed because they can speed it up or slow it down. It's more about getting the actual movement right or the actual progress of movement. So it wasn't really like I listened to any music that made me feel a certain way-it was more about just being prepared and focused.

Was there a moment when you were in costume and you had trouble getting through a scene just because it all seemed so silly?

Yeah, I mean, sure. I know what you mean, I think as well when the film hasn't been color graded yet, and there's a whole bunch of crew and people walking around with monster heads on and wearing golden corsets done up, everything looks a little fake and plastic without the color grading or the actual set markings to make sense of being on the set and everything—it does feel quite extravagant. But that's also what this is: the genre is quite fanciful. It's not really real, so yeah, I think you've just got to trust Tarsem, and he's such a visionary with his style, it's so unique and so colorful. Maybe it's the Indian influence, but it's breathtaking, so I think you just have to trust in that part and that's not for me to worry about.

With Mark Canton producing this, did you have any trepidations about doing something that had the potential to be dismissed as a 300 knockoff?

Well, I think it's a wonderful and brave venture for the producers to take on, because it's not a remake or based on a comic or a series. It's an original concept, and plays across many genres: war, drama, love, action, fantasy. The visual effects are amazing, and it's unique because Greek mythology is where storytelling all began. That's what filmmaking is—storytelling—so it's great to connect that idea that we're still creating stories from the oldest characters and stories that we know. I haven't actually seen 300, either.

How careful do you have to be to choose other projects to make sure you aren't typecast?

I think this role is relevant to other ones, but it is all relative as well. The film that I shot after this is called Loft, and it was a very heady, cerebral drama, a remake of a Belgian murder mystery, so it was a very different genre. And I have another film coming out in Australia, it's a comedy—sort of a heavy drama with comedy—and I play a Russian woman so I had Russian dialogue and a Russian accent. So I haven't found that to be a problem. And I do try to play really different characters, but moreso characters that challenge me to go to explore something that isn't me-it's as simple as that. And of course I don't have to do anything. No one's forcing me to do a film, so if I'm not inspired, I can just gracefully say no and do what I do love.

Can you just pick projects when you feel inspired or do you have to stay in the public eye?

If I had to categorize it, I'm not ever really good at titling or boxing myself in, but I do understand what you're saying, and I think I'm happy to wait it out. I really do know—it's an instinctive feeling when a character comes along that you really feel passionate about playing, and then then there's a certain genre or a certain director that you might want to work with. And you might not be that inspired initially, but because they're on board, that's enough for you to totally feel right about doing it. So there's sort of a few different things that can help me make my decision, but I do feel okay with not working constantly, because its got to mean something—it really does for me. I have to have the feeling that I'll be able learn or grow or give something worth.