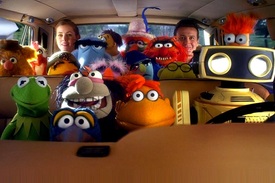 When you think about the role producers play in making a movie, you typically imagine calculating businessmen doing everything to squeeze the costs—and the life—out of the film. But in the quest to make The Muppets, producers Todd Lieberman and David Hoberman squeezed life into it, helping make certain the final film was true to the original characters while dusting them off for a new generation of kids. In advance of the Muppets long-awaited return to cinemas, I talked to the duo about their behind-the-scenes role in making the latest Muppets film happen after nearly 10 years off the silver screen, a tricky stunt that meant not just choosing the right director, but nailing the just-right combination of sentiment and laughs.

When did you know you'd ended up with something special?

Todd Lieberman: When we saw the final cut? [Laughs]

David Hoberman: For Todd, it was probably much earlier. But for me, I think it was probably in previews during the first cut when I knew we had something altogether that was powerful. This took me some time because there was a long post [production] on it.

Todd: There was a lot of shaping going on with this movie, a lot of stuff that fortunately in some cases, unfortunately in others, we had to cut in order to focus on what the story was. But I knew from almost the beginning that there was something unique and special about it. Certainly the musical numbers, there was a joy to those and a sense of humor that wasn't a standard sense of humor.

David: This being Hollywood, I need someone to tell me how I think. [Laughs] Todd can come up with it on his own.

Were either of you familiar with Bret McKenzie and Flight of the Conchords before going into The Muppets?

Todd: Definitely, I've seen all the episodes. James Bobin [the director] and he obviously had a very close relationship and when James brought up the idea of bringing him in as music supervisor and also to potentially write some songs, I felt that really was the right creative fit for everything we were trying to do. We'd been a good creative unit for a while. Jason Segel came in and pitched the idea and he brought Nick Stoller in and those guys wrote a draft. We were brought in shortly thereafter and met with many different directors. David and I felt that James was the perfect director for it for many reasons, his sense of humor being one of them, and Bret's sense of humor really blends with his.

David: Also, we didn't want to get someone whose sense of humor was just down the center—we wanted to go outside, give the film a more contemporary, modern sense.

And both James Bobin and The Muppets have a TV background.

David: You know, we met with a lot of people—

Todd: A lot of people who had done many features, but James being a first time feature director still clearly had the tools ready to make the jump from television to film. He had a very clear vision of what he wanted that aligned very well with what we envisioned for the movie, not to mention—and I say this half-jokingly—he's very speedy. That comes from his television background and doing things very quickly. We knew we had to tackle a lot in this schedule and he moves at a very rapid pace.

He's mentioned that he was used to the "BBC method": small productions, very small crews, one or two writers—

David: You know, I will say as producers that choosing the director is the most important decision you'll make. It really comes down to "What do they have to say?" and "What is their vision for the film?" and "Are we in sync?" because if we're not in sync, we're going to be trying to steer the ship where the ship doesn't want to go. James had a real sense of what he wanted to do.

Todd: Yeah, he wanted to tell an emotional story. We whittled it down to two directors. James was one of them and one other guy. We knew we wanted James, and Jason who was going to star in the movie had to meet the directors we wanted. So we put him in a room with both James and the other fella, and Jason agreed with us.

Jason said that getting this movie made was the difference between having a singular vision and treating the franchise like a property. Do the two of you feel like that statement is accurate, that maybe it was being treated like just a property?

David: Boy, I think that it shows how important movies are to a franchise—and I believe that they were doing what they could without having a movie or TV show on the air. I think the timing of the experience happened when it was supposed to happen, and for us, all we care about is that we make the best movie we can make. We don't treat it like a property—we treat it like a movie. We know what we wanted and worked as hard as we could to make the best movie we could.

Todd: I look at it kind of like this: There's no judgment in what had happened prior, with them [Disney] perhaps treating the Muppets like a property. For whatever reason, it allowed us to tell a story now about them having broken up and coming back together. If they were always super famous and had always been in the forefront of media for all those years, we wouldn't be able to tell that story. It's a Catch-22 in a sense: you need them to have done what was done in the past in order to be able to do this.

What would you guys say about Frank Oz, who, not having seen the final product, perhaps, has expressed reservations about this take on the Muppets?

Todd: The draft that he read was a really old early draft. You go through the process of changing it to tell the story. It went through significant changes since then. Like I said, it's tough. I could imagine it's human nature if you're a close-knit family and you've been working together for many years, and Frank obviously has a very strong emotional connection to the inception of the brand. I can see why it would be odd or challenging for others to come in and kind of do something he'd been doing for many years. I hope that during the course of making the movie and ingratiating ourselves with the passion that we're showing for the Muppets, those who have worked on it for all these years, they've now embraced us. I can't speak for Frank because we haven't spoken with him personally, but those who've worked with the Muppets for years that we have spoken with, I know they're with us 100 percent.

Have you worked with the Henson family?

Todd: No, they're not involved.

David: But they both saw the film, Brian and Lisa [Jim Henson's children], and loved it. I think that until you've seen it, you don't really know. I do understand having a conceptual problem starting with "The Muppets have broken up," when in real life, they have not. There is probably where the rub comes, and we thought—well, Jason thought, really, the premise of his screenplay, in fact—that we had some artistic license to explore our way of reintroducing them as the Muppets have not had this kind of exposure over the last decade.

Do either of you have a favorite song from the film, and is there a song you'll be pushing for Oscar consideration?

Todd: My two favorite songs are "Pictures In My Head" and "Man or Muppet?" I think they're both great—they're both catchy, but pack an emotional punch and it's hard not to get chills when Jason is belting out the final verse and the rain is coming down on him.

David: "Pictures In My Head," when I first heard it I just loved it. I think there is something really quite brilliant about "Man or Muppet?" It is a ballad, it speaks to identity and it comes at this point in the movie where these two characters have to make a choice about their lives—and at the same time the first thing you get in the song is a hint of comedy.

"Man or Muppet?" is my favorite, but I also really like "Life's a Happy Song." I went in nervous it was going to be hip or edgy or whatever, and then the first thing after you meet the characters is this unashamedly sentimental yet campy kind of musical number. But I want to ask: we'll assume that the movie is going to be a success. Do you two have an idea of what you'd like to see in the next film?

David: I hope that we just keep making original movies, that we have good stories to tell. I don't really have a sense of "Okay, what is that story gonna be?" but I hope we somehow don't revert to genres, that we keep it fresh and new.