close
OPINION: The Oscar-nominated director is dead. If this news doesn't make you feel at least somewhat angered by the passage of time and the ravages of age, you need to throw out your Blu-ray player. 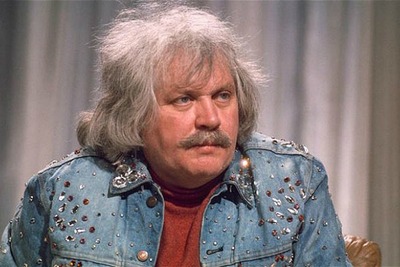 As much as I'd like to claim to have been an exceptionally intelligent film lover from a young age, being stuck as I was in small town Oklahoma and lacking premium cable, I was reduced to watching what was available at the local video store in which I practically lived from 6th grade through 9th. As a result, my introduction to Ken Russell was his sole foray into science fiction, the absolutely insane Altered States.

Based on the novel by legendary screenwriter Paddy Chayefsky and inspired by sensory deprivation research (and, naturally, awesome psychoactive drugs!), it contains some of the most disturbing imagery I'd ever seen up to that point in my life. Perhaps this says something about the level of adult supervision I enjoyed as a fat little preteen, but I happened to watch it the same summer* in which I saw A Clockwork Orange for the first time, forever joining the two films together in my imagination**.

Despite being a crummy VHS pan and scan transfer that, having been neglected in a low-budget video store for the better part of the 80s, looked absolutely terrible, it's not an exaggeration to say that Altered States changed my life. As I would do with A Clockwork Orange weeks later, I watched it 3 times the weekend I rented it, had recurring nightmares about the grisly transformations undergone by William Hurt, tried (and failed) to get my friends to watch it with me***, and ultimately read a tattered copy of the novel purchased in a used book store until the pages fell out. Suffice to say, I loved it. And despite this, there ended my fascination with Ken Russell's work for at least a decade.

That is, until the timely intervention of a close friend corrected that error and introduced me to what might be the greatest musical biopic ever produced, the Roger Daltrey-starring work of genius, Lisztomania. But more on that shortly.

Ken Russell was an artist who loved art and had something of an obsession with portraying the kind of insanity that makes one capable of creating. He began his career in the 50s with a series of excellent documentaries, before transitioning during the early 60s into directing several increasingly uncompromising, idiosyncratic biopic teledramas for BBC. Among those works is the absolutely excellent "Isadora Duncan, the Biggest Dancer in the World", not only a rare example of how to make a watchable Biopic but, having been co-written by Sewell Stokes (author of "Isadora, an Intimate Portrait", on which the film is based), it also accomplishes the difficult task of creating a dramatic and yet honest portrayal of an artist who even in her own lifetime was more known for her legend than for her humanity.

But the crowning jewel of this period is an infamous film about Richard Strauss called Dance of the Seven Veils. Notable for Russell's decision to portray Richard Strauss as a Nazi, it sets his music to scenes of horrid brutality against Jews. That portrayal is admittedly very, very unfair. Strauss never joined the party and what little cooperation he gave to the regime was intended to protect his Jewish family members (he was ultimately able to prevent them from being sent to death camps). However, his lack of public opposition to the regime led to misconceptions, misconceptions Russell exploited for Dance of the Seven Veils. Strauss' surviving relatives were so outraged they withdrew all rights to his music and the film remains banned to this day. I can't say I approve of Russell's besmirching the legacy of Strauss, but the film is excellent and it's a shame it can't be seen as intended (though a very crummy version is, at least right now, available on Youtube. Better watch it before it's taken down!)

These bizarre telefilms - and seriously, you have to love how crazy BBC was in the 60s. We got Doctor Who? and Monty Python's Flying Circus too! - laid the groundwork for Russell's transition into features. Though his first two films are of arguable quality, 1970s' DH Lawrence adaptation Women in Love was nominated for a few Oscars and established him as something of a countercultural icon, an association that led directly to his making, mid-decade, the two films for which he should be most well known for.

The first is Tommy, an adaptation of The Who's Rock Opera. You know it, I know it, everyone knows it. That doesn't make it any less wonderful of course, and thus, here's a clip:

Russell followed this up with Lisztomania. Simply put, if you haven't seen this magical film, you need to correct that mistake immediately.

The word 'Lisztomania' was coined in the 1840s by German poet Heinrich Heine to describe the extreme fan-devotion Liszt inspired at the height of his fame. Though today we are well-accustomed to the intensity of celebrity worship, the phenomenon was almost unheard of at the time (Handel apparently experienced something similar in London during the 1700s). In a sense, Liszt was the first pop music superstar, and Russell's film seeks to tie that with the experience of Rock stardom in the 1970s. Employing themes that would show up a few years later in Peter Shaffer's Amadeus, Lisztomania portrays the composer (Roger Daltrey, brilliantly cast) as a well-meaning but naive genius taken advantage of by his friend Richard Wagner (played by Paul Nicholas). Supported by Yes' Rick Wakeman, who provided a soundtrack that included versions of period compositions and a couple of originals, it's a strange, dreamlike narrative built around musical performances, the kind of thing that became ubiquitous in the music video era.

Of course, these are just (my personal) highlights. Though his career fell into serious decline in the 80s, having directed an astonishing 71 movies, Russell's career is a mountain of essential viewing. Now, it's difficult to call the death of an 84 year old man 'tragic', but with Ken Russell's death we've lost one of the great directors of film's second golden age; his death may be a natural outcome of a long life, but the fact that his name isn't whispered in the same reverent tones as Stanley Kubrick's is, simply put, a tragedy.

I'll leave you with Phoenix's excellent song Lisztomania, which, though inspired by the term and not Russell's film, is still very excellent and, I think, a nice way to send the old boy off.

Now, if you'll excuse me, i'm going to catch up on Richard Lester's films before he kicks off too.

** As a result, I firmly believe the two films, each dealing in their own ways with anxiety about the ability of psychiatric therapy to 'improve' human beings, ought to be screened as a double feature. But I digress.

*** True story: In one case, I ended up being forbidden for several weeks from hanging out with one such friend by his fundamentalist Christian mom, angered by my constant attempts to get him to watch 'sinful' films. The church they attended also believed that The Star Wars trilogy was satanic.