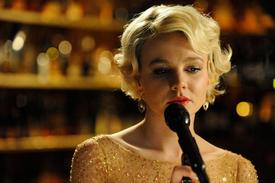 In the two years since her breakthrough performance in 2009's An Education, Carey Mulligan's rise to fame practically defines the term "meteoric." After turning up in Michael Mann's Public Enemies and Jim Sheridan's Brothers, she landed a juicy female role in Oliver Stone's Wall Street: Money Never Sleeps, and then costarred with Ryan Gosling in Nicolas Winding Refn's own Hollywood breakthrough, Drive. But in her new NC-17 film Shame, audiences won't just get to see, ahem, more of Mulligan, they'll see a darker side of her as she plays Sissy, the grasping, over-eager sister of a sex addict (Michael Fassbender). Boxoffice sat down with Mulligan to talk about the physical and emotional challenges of taking on a character who lays her life bare—in more ways than one.

There's almost no back story for how your character became such a mess. How much of it was important for you to define even if it wasn't going to be revealed in the film?

It wasn't very deliberate. We knew that we didn't want to talk about it in the film. We talked amongst ourselves—me and Michael and Steve—about what in broad strokes had gone on when they were children. And we kind of left it there. You have ideas for things, and you create little memories that didn't happen to sort of bring you into the scene, but I never shared them with Michael. We just sort of did our own thoughts, and it wasn't something we discussed very much.

It's not immediately clear in the film that you two are siblings. In your first scene, he walks in on you showering after you've broken into his apartment. Was that important to leave unclear?

Well, I think it's strange to him—I think he's uncomfortable. I don't think it's as strange as some people would think, but he is definitely. And part of the reason she does it, is because it provokes an irritation in him. She likes goading him and pissing him off because she think it's funny, or that's what she thinks is funny, and he doesn't think it's funny. So yeah, it's meant to be uncomfortable and comfortable—sort of. He walks out and he can't separate her naked body from images that he's seen. It makes him hate himself. A lot's going on for him, and she's trying desperately to forge a relationship and grasp onto something, and their dynamic is that she pisses him off and he reacts. And that's funny to her.

How self-aware do you think she is about her penchant to make questionable decisions?

I think she sort of wants to be seen, and she wants to be heard. She's an exhibitionist and she wants to fall in love and I don't think she's promiscuous in that she will sleep with someone for no reason, but I think she wants to believe someone will save her. So she sleeps with James Badgedale's character because he's charming and he treats her like a princess, and she thinks he'll save her and fall in love with her in that moment. And then she wakes up in the morning and I think she starts to understand that's not the case. But I think her boyfriend that she's with, that she's on the phone to, is someone that she loves. And she falls in love like that [snaps fingers], and she gets her heart broken, and then she ends up with her brother just trying to have some stability.

Had you done any singing prior to performing "New York, New York" in this?

I sang at school a little bit when I was a kid. I sang in musicals and I sang in church choir and stuff, but I'd never sang in a film. And I sang on a Belle and Sebastian record last year, completely randomly, so I'd done a little bit, but it was terrifying. But I'm not like "a singer." I can hold a tune, so yeah, we worked on it in New York, and Steve wanted it live—because you can always tell in films when they dub it and it sounds so terrible—so he wanted it live and he wanted it all in one take. So Steven Aramus, who is an arranger and composer, he would sort of make chords, and I would sort of sing on top of it, and slowly over like a couple of weeks we got into a rhythm with it. And Steve would come and watch the rehearsals, so it was really Steve guiding the whole thing, and Steven [Aramus] arranging it. And I had a voice coach who helped me get the singing part a little bit better.

How tough was the singing to do, because it's not just performing a song, but it's an incredibly deliberate sort of performance.

The song was always two things. It was about something was going to rescue her and I imagined that when she was younger, New York was the place that would make everything better. So that was her journey, but it was also that if her brother could—if she could get to him—then she could be more peaceful, and she could sort of find a way of not feeling hurt anymore. And I think she realizes during the song that he's not going to save her, and that's very sad. New York isn't the place where she's going to be saved. This is sort of the hope that she has disappearing through the song.

And he cries. What do you feel is behind his reaction to her singing? Is he reacting based on her actual performance, or is this sort of part of a larger reluctance to praise her?

I don't know? Yeah, it unsettles him, so he dismisses it. It's sort of an appeal to him for love, and he can't give it to her so he dismisses the song. It's all tied up in the same thing. I don't think he's overtly praising anything she does, but especially this because it makes him feel uncomfortable.

Why do you think this particular moment in their lives is more important than any other? You could easily make the film about their upbringing or other moments in their past or future.

I think it's the point in their lives when they're about to go off in completely different directions. It's the last time she's going to come and stay with him. I think she's stayed with him a lot of times and whatever has happened to them, they've reacted in two very different ways: he's become kind of introverted and has difficulty with intimacy and he shuts people out, and she's opened up her arms and she's sort of throwing herself into the world and asking people to catch her. And so this is the point where, in that scene towards the end of the film when he says he's leaving, she says, "Well then, I'll never see you again?" and I think that's probably true. In the future, that would have been the last time that she would have come to him—the last attempt to fix things for both of them.