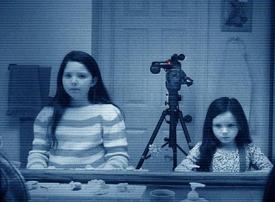 Paranormal Activity 3 fills in the unexplained gaps in the saga of Katie and Kristi, the sisters terrorized in the first two installments. Paranormal 3, however, is the first film where the two square off together against a supernatural menace, prompting the question: what would other sisters do if attacked by unseen forces from another world? In order to properly consider the important quandary, we've assembled a roster of sister acts from famous families to see what would happen—and who would survive.

Paris and Nicky Hilton. These celebrity sisters would probably make a number of mistakes with their otherworldly houseguest before bothering to sober up and take the problem seriously, probably around the time their chihuahuas start disappearing. While Nicky will find herself swept along by her sibling's ambitious idea to pitch their haunting to Vh1 to resurrect her reality TV career, she's also the Hilton likely to end up as the creature's concubine—although thankfully she's familiar with quickie annulments. Meanwhile, if Vh1 doesn't bite, Paris will release a quickie DVD of herself running around the house naked and screaming, and then pretend that the tapes were stolen from her house.

Mary-Kate, Ashley and Elizabeth Olsen. The creature chasing down the Olsen twins is going to have a tough time differentiating which one he's possessed since they're practiced in pretending to be each other. The creepiest part of them being haunted is that the creature was counting down the minutes until they turned 18. (Well, that, and the way that Mary-Kate cries out "Oh, Uncle Jesse!" in her sleep.) One can expect, however, that during their childhoods they'll do as much as humanly possible to deter this dangerous presence, and then spend their adult existence living off of the syndication of the tapes. Meanwhile, Elizabeth will start being haunted much later, and handle it much better—at least, thus far.

Kylie and Danni Minogue. Kylie Minogue will be haunted for a lot, lot longer than people will remember, although her first memorable incident was almost 25 years ago, and very similar to a tape from years before, and one that she just released. Nevertheless she will be revered for decades in her home country as the first one to fight the supernatural menace, but will sadly remain ignored elsewhere. Danni will linger in the ghostly shadow of her sister's ghoul-battling accomplishments, although she'll achieve her own, more modest success surviving a haunting in a hotel bathroom. Ultimately, however, the duo will oddly remain more relevant than other haunting survivors in other homes, even if they're not recognized enough for it.

Wynonna and Ashley Judd. Wynonna successfully warded off spirits for several years with her mother before going solo. (That mom weirdly looks younger than her is a second supernatural event.) That said, she'll find plenty of success in her own right, although she will be plagued by a severe phobia of watching her footage on camera and will stock up on diet pills that will really cause her to hallucinate. Meanwhile, Ashley will really only be half-involved in Wynonna's battle, but what's noteworthy about her efforts to ward off spirits is that she's really good at it for a while, only then loses interest—which is convenient because around that same time, the spirit will lose interest in her, too.

Beyonce and Solange Knowles. Beyonce will start off fighting evil forces with a couple of good friends, and then realize that she's the only one this monster cares about and go it alone. Subsequently, she'll become incredibly popular as a solo ghost hunter, although it's still questionable how much she really has to do with her successes. But after marrying the most successful ghostbuster in the game, she'll continue her meteoric rise while wearing unflattering ghost gear designed by her mom. Solange will wait in vain to be invited on her sister's adventures, before breaking out as a solo act in her own right—although to her credit, her approach to battling unseen beasts is much more unique and interesting.

Venus and Serena Williams. Trained together from an early age, these two two sisters are amazingly even-matched when it comes to thwacking small, fast ghosts. Initially, they were able to deal with the supernatural intrusion with a childlike enthusiasm and passion, becoming role models to other girls fending off dangers. Although Serena suffered some serious injuries throughout the duration of her battles with the domestic beasts, she always returned to fight again, and proved to be better even than her sister. But Venus never had the unpredictable temper of her sister, and indeed fought to be seen as equal—nay, superior—to any of the ghost-fighting boys. And she rocks a short skirt. A demon would be wise to stay clear of the Williams' muscle.