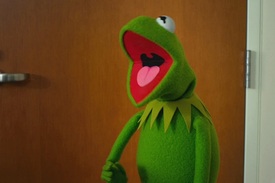 It's not every day you meet a celebrity with the stature—not to mention the raw power and intimidating charisma—of Kermit the Frog. An entertainment legend and role model to amphibians everywhere, Kermit has been a fixture of cinema, stage, television and music since the 1950s. Now after more than decade's worth of relatively low-profile living, Kermit has finally returned to cinemas in a big way in order to star in The Muppets, the new comedy that reunites him with the original Muppets and introduces some new friends.

Going into our interview, I didn't know what to expect from the lovable green frog. With a career spanning nearly six decades, he's worked with rock stars, Oscar-winning actors and even heads of state. But happily, I found Kermit to be every bit the charming, humble and deeply reflective everyman his public image suggests. Perhaps it's a testament to Kermit's remarkable talent, or that he really is the nicest frog ever to leave the swamps, but despite the constant presence of his personal assistant—a shadowy human named Steve Whitmire who stood right behind Kermit and constantly communicated with him via a series of elaborate hand-signals—I never once felt like Kermit wasn't giving me his complete attention as we talked about his thoughts on his long career, and most importantly, his deep and abiding respect for the swamp-dwelling turtles he considers among his best friends.

As long as they're not just dying!

Now, I'm reluctant to start this on a controversial note, but there's a scene in The Muppets where you're asked if you're a Teenage Mutant Ninja Turtle, and you said that you were.

How do you respond to concerns that you might be making it okay to lie about being a reptile when you're clearly an amphibian?

Yes, and clearly manipulating a small child into being in your telethon. It's sneaky and dirty and rotten and I would only do it if it were written into the script.

It's called acting for a reason.

That's right. And you know, there's another moment you may not have picked up on. In the scene where Piggy and I are walking through a French village, I am wearing a turtleneck. But I just want to go on record with you to say that I have absolutely no prejudice against turtles whatsoever. Some of my best friends are turtles, tortoises and terrapins—I would never want to hurt the turtle community.

You have to live together in the swamp.

I did notice that in the movie, the other Muppets manage to pull off some Ninja moves.

Yeah, I didn't get to take part in that.

Though you were the only one with the courage to express concerns about kidnapping Jack Black.

Well, listen—I thought that after tricking the kid into doing the telethon I'd better redeem myself.

What was it like reuniting with the full team for this film, with so many years having passed since doing films and particularly your variety show?

It has been a long time. Of course, we have done lots of other stuff, some TV specials [NOTE: most recently, 2008's A Muppets Christmas: Letters to Santa], and some stuff on the Internet. Fortunately, the idea of having been separated for so long was a conceit for the script. We've always been close friends.

But this is certainly the highest profile project you've put together in a long time. Does it feel weird being presented to a completely new audience?

What I hope—what my hope is for this film—is that all our older fans who grew up with us now get the chance to introduce us to their kids.

And this is the first time in many years that you and the other Muppets have been able to play yourselves as characters rather than take on new characters in, say, Muppet Treasure Island.

You know, I do like Treasure Island and Christmas Carol, where we played other roles, something we didn't do in the first three movies. This time, I hope, we've done something that really nails who we are.

Well, I think over the years with the whole rise of reality television, us Muppets have probably gotten a little more real.

People do know more about your personal lives, especially you and Piggy—

They know when we're not on the screen, we're living in the world just like everyone else. I think that makes it a good time to come back and do something that relates to who we are. And even though this is just a movie, and the story about us having not been together for years isn't quite true, it's a good reintroduction. I hope we get to do more.

Do you want to work with the same team again?

I think we will, that would be great. This was a great way to look back on the stuff we did years ago and reintroduce some of those ideas to people too.

Can we talk about the new Muppet, Walter, for a bit? How do you like him?

I like Walter a lot. Walter is very representative of our sort of core fanbase. They're all out there, and they've stuck with us through all these years. We try to pay attention to that. And Walter really embodies that community.

In the film, you bring him into the Muppet Show. Do you feel like that's symbolic of the point of the film: that the Muppets and their fans are a kind of family?

Oh, definitely. I've always felt that the success we've had has been part of this kind of agreement we have with the people who are watching. They hopefully like what we do and we try to respect that. It's a real partnership, you know—you cannot be successful in show business without that. Our fans' contribution to what we do is almost of equal importance to what it is we actually do. And there are some great fan-run Muppets sites on the Internet.

So you don't have to rely on '80s Robot for your Internet access?

Ha, no. But you know, I don't always go on those sites and type, but I do read them. They don't always love everything we do. Sometimes they criticize—

What could you possibly be criticized for?

For instance, some fans think I'm too soft.

You are very plush...

That's true, I am plush, thank you. I think that's a compliment?

And sometimes if I do an appearance and I'm not angry enough—like I got angry at Piggy once when we were doing the Muppet Show—and sometimes, they want me to be more friendly and sometimes they want me to be louder or softer. I've found that you can't please any of the people most of the time. And you know, all of us Muppets, we've evolved. We've gone through many changes over the years.

Jason is either the first or second biggest Muppets fan. Walter is sort of an extension of Jason in many ways. You know, Jason wasn't even born when we did the Muppet Show, but he knows us for all our work we've done over the years, he studied up and that made him a great candidate to do this film. Over the course of the film—and especially since he and I have been promoting this film together—I think he's probably gotten to know us even more from the inside, he saw us from the outside for years and now we know each other inside and out, which is great.

If you get to make a sequel—Muppets 2, if we can call it that?

If we're fortunate enough to get to do another film like this—and I bet we will—I think it would be great to use this one as a springboard to do something really heartfelt, sort of the definitive story of who we Muppets are. You know, we brought everybody back together. Now we can concentrate on the depth of who we are. And I think we're pretty deep!

Before you have to go, I'd like to ask about the music you've sang over the years. You made your film debut singing a beautiful song by Paul Williams, "Rainbow Connection."

How did you feel about the music in The Muppets? I particularly liked the song you sing—

"Pictures In My Head." I loved singing that song, and I think the music is great. But at the same time, it's great to get to sing "Rainbow Connection" again. I'm glad they put that in there. I think it's still very relevant. And you know, Paul has done an enormous amount of work with us over the years, and I'm glad that his work got to be a part of this.

My personal favorite happens to be "Moving Right Along," but of all the songs you've sung, what's your favorite?

Well, I am a little partial to "Being Green." It was my first hit, but also for what it stood for. Singing about the color green, it's not just about being comfortable in your own skin any more—it can be about the environment. And you know, if we ever get the environment straightened out, it'd be interesting to see if it evolves to be about something else. You know, like broccoli or spinach.