on December 15, 2011 by Hillary Eschenburg
Print 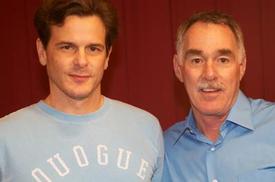 What prompted you to create this film?

I became interested in Victor, and Victor's story. Back when he testified I happened to see him talking about his life in a very careful way and he seemed to know a lot more, and I pursued him personally, and got to know him personally, and thought it would make a great narrative feature. When I saw that the bad guys—the tobacco industry—were not going to go out of business or have much awful happen to them, I realized it would have to be a documentary. I wrestled for a long time on how to tell the story, of this impossibly dark, bleak story, and the more I researched the angrier and more troubled I became. It was such dark material, but I understood that Victor was focusing on a bright spot. Victor's idealism and earnest commitment to do some good would be the way through to make this something other than an angry, sad story about an industry that kills a lot and never seems to be given comeuppance.

I saw that they might have the votes for regulating the industry, and we fortunately started shooting interviews two weeks before that vote occurred. Suddenly all of the people that we approached for interviews were winners and not losers, and everybody had a genuine fondness for Victor and his part in all of their lives, and gratitude to him for coming forward. Pretty much everybody except Philip Morris executives accepted my offer to go on camera and share their part in these extraordinary times that were the tobacco wars of the 90s.

Victor does seem to be a very positive and upbeat person and he has a very inspiriting story that you paint very well.

Thank you. I also saw that as a real opportunity to spotlight someone who wants to do good because it puts people in touch with their good priorities in themselves, and perhaps inspires them to act in such a way.

Victor is the first whistleblower in the tobacco industry. What sort of a precedent did he set for those who followed him?

He made it so that they could do it in a dignified way. They didn't have to be angry or looking to settle scores. They were just scientists doing their jobs who just wanted it to be known because it was the right thing to do. Since it had never been done there was a lot of fear of what would happen to them, there had been extraordinary pressure put on the community of tobacco employees and whether they worked for the industry or not, anybody in that community, they had a great hold over all of their employees. There was fear of the unknown. What would happen to someone who did go public? For these guys, when nothing too terrible happened to them they made it easier for everyone else to follow because of the example they set. Jeffrey Wigand went on to a lot more notoriety because a film was made about him, but he, I think to a large degree, was also encouraged by the fact that Victor was not litigated and kept in a court room for the rest of his life.

It's interesting to see The Insider and compare it to this documentary.

Well, one story is about 60 Minutes and the other one is about the tobacco industry. The Insider, I don't think Michael [Mann, director] ever intended that to be about the tobacco industry, but because this drama had played out in '94 in such a public way it had been engrained in the public psyche and people saw it through the lens, the dramatic prism of those subcommittee hearings and had that in the backs of their minds, and suddenly it made a film that had one scene in a tobacco lawyers office seem to be about the tobacco industry, when it's about an employee's relationship with a journalist. And that's part of why it took so long to make because people feel like they've seen "the tobacco story" and at the end of the day everybody knows bits and pieces, but because it's in the news regularly since I optioned this material in the 90s, there's always a story that has a tobacco component to it, of lawsuits being filed or lawsuits being challenged, and it makes people feel that they know it and I wanted to tell the story to connect those dots and make it cogent.

And you can see this timeline from the early 80s on, and there's this gap of about 10 years between when Victor is conducting this research that's suppressed and when it goes public. Was anything going in the period of time?

Yeah. The industry prevailed in court, and essentially beat back people who would sue or collect reparations and that happened in the 80s. Victor tried to publish his paper again. That wasn't in the documentary, but he did try again and the industry found out and threatened him with litigation and he backed off. It was accepted a second time and they had to withdraw it a second time. He's a pretty audacious fellow to even do that, and they got an explicit threat from a Philip Morris attorney who succeeded in knocking them down.

That must have been incredibly frustrating for him to want to get this information out and not be able to.

I'm told that a paper that's approved is virtually never withdrawn. This fellow Herbert Barry—I don't even think he made it into the movie—he's a 92-year-old man who drove himself 6 hours alone to meet me in Pennsylvania to do an interview when I was interviewing another person, who said that in his 30 years of editing this magazine, or science journal, he had seen one other case where an approved paper was withdrawn. It's virtually unique.

Wow. So that obviously shows you how important this information was.

It's a very powerful, very smart industry that has used a wide array of means to achieve its foothold in popular culture and remain there. There could be many other documentaries made about all the dirty tricks, or however you want to say it, there's so many different angles on this story. I just chose one of them. One of the hardest things in telling the story is to figure out what is the through line and coming up with the victor through the eyes of an idealistic scientist was one of the defining things for me.

While researching and creating this film was there anything about Victor that really surprised you?

What continues to surprise me—I've known him for 15 years—is he's consistently the same high energy, idealist passionate do gooder every time I'm with him and meet him. I used feel like I've taken shower after being with him. I used to feel cleaner by virtue of being with him. It's a rare thing when somebody says "follow me and do some good" and people do. And I think making the film was my effort at contributing as Victor does.

We see him in the film speaking to kids about the dangers of smoking. Is he reaching out to adults in any way or does he only focus on children right now?

Are you and Victor still in pretty close contact?

Yeah. He was just here for a screening at MOMA in New York. Starting January 13th we have a screening in a different city each week for the next three months. So we're going to be at each of these cities doing local public relations and promoting the opening and attending and doing Q and A's the first day or two of screenings. It's a good thing it's with such a dynamic and interesting guy.

What are your thoughts on the future—we've seen more legislation against the tobacco industry in the past few years. Do you think that's going to continue to get firmer?

Here's where I'm at with that. I think the film takes you from the Wild West days when the industry was disgraced and deregulated and through to regulation when public opinion coalesced against the industry in one of the rare moments of bipartisan agreements in the Obama Administration where both Congress and Senate voted overwhelmingly to regulate the industry. It's a huge change in the fortunes of this industry. Not in this moment, but in the next five or ten years, I think it will be devastating for them. The FDA now has the authority to reduce nicotine in cigarettes to the point that they're not addictive. Experiments in science that will support this recommendation to regulate have begun. It's taken two years but it has begun. The test cigarettes have been produced and they're the biggest trial in this area that's ever been done. Essentially the wheels are in motion to produce the science that will lead to a regulation that helps nicotine to be reduced in a cigarette. If there's not enough nicotine in a cigarette to keep and adult or a kid addicted, no one will buy cigarettes. I think this will happen in a generation. Polls indicate that a majority of Americans in the 70s, smokers included, 70% or so, would approve of a government agency taking the nicotine out of cigarettes. It would be a popular thing to do. I believe this is what is going to happen in the next couple generations. That sounds like a long time, but [the tobacco industry] has been regulated, they've lived in an environment of deregulation, they're going to exercise their rights and due process in court, they're going to be obstructionist, they're going to try to delay things, but I think it's inevitable that cigarettes will be regulated out of business by making them non-addictive.

That would be a positive move.

Yes. It's not a breaking news story that anyone is going to write about because people want something that's of the moment, but epic societal change happens slowly and the changes in smoking behavior in America have happened very quickly over the last 10 or 15 years. And in the next 10 or 15 years, if the schedule is laid out for reducing nicotine, then it will have happened very quickly indeed.

Smokers and non-smokers all agree that they don't want kids smoking the future. If there is that agreement there should be some basis for that to happen. They're doing tests now to determine what can be done with the existing addicts. One out of five adults in this country smokes. Science has to determine a schedule where people can live their life and slowly get off of nicotine before a regulation can be issued.