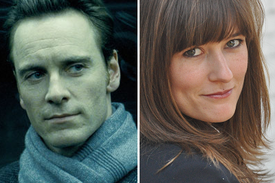 The stark, stunning opening scenes of Shame reminded me of the beginning of American Psycho. Both Michael Fassbender's Brandon and Christian Bale's character use their good looks to seduce, both have vacant expressions and sterile apartments, and both have relentless drive to do what they do. Brandon's not a sociopath, but he certainly does have sociopathic behaviors—he clearly disregards the personal rights of others—and he's a hunter. We see it in the train. He locates his prey, the married woman, scopes her out, snares her with his gaze—almost hypnotizes her. When she falters and rushes out, he tries to track her down. And because he's handsome and captivating, she quickly responds to the intrigue.

I would have liked to see somebody more plain than Fassbender in the role. For one, because it takes away the spectacle of seeing Fassbender's perfectly sculpted buttocks thrusting every 14 minutes. I see McQueen making attempts to make it uglier, but the whole movie is very sleek. We see Brandon do ugly things, but his good looks end up being just another barrier between the character's humanity and the viewer. I was actually thinking of another movie as I was watching Shame. In Kevin Smith's Zack and Miri Make a Porno, there's a scene where Seth Rogen and Elizabeth Banks are having sex on potato sacks. It's this really dreamy moment between them from their POV-romantic and sensual—and then the camera pulls back so you see what it's actually recording and it's this awkward, lame humping action with grunting sounds. I wish that this movie had more of that gross reality. It's not sexy, or dreamy, or perfectly lit—this is a desperate man in a fugue state.

We're left to guess what's going on with his family, but I imagine that dad was probably a "womanizer" and may have molested the daughter. I'm guessing mom was checked-out, turned a blind eye and wasn't there to protect the kids. Cissy, Carey Mulligan's character, probably acted out the trauma of being abused and ignored by being dramatic and seductive, by overstating her pain and doing anything—anything—to get attention. I think Brandon was the hyper-responsible parent-child who took care of things and didn't have a soul to talk to. His acting out probably started with masturbation and age inappropriate sex play.

McQueen does a beautiful job of illustrating Brandon and Cissy's parallel processes—they're different, and yet exactly the same. Brandon and his sister are bottomless pits of need and pain. The need plays out in diverging ways, Brandon is probably seen as studly by his peers while Cissy is seen as desperate and clingy and crazy and borderline. But they're both just madly trying to fill this gaping wound, this void that should have been filled with parental affection and unconditional regard-all the things that kids need to feel whole.

I wondered about a transgression between them. I wouldn't be shocked to learn that Brandon molested Cissy when they were young. He's older and more powerful than she, so when he's, say, 12 and he's starting to act out, she's the girl that's in the house. He's be furious with his parents and needing to take it out on somebody, and she's whiny and pretty and starting to develop—she's an easy target. And that would explain her traumatic bond to him. It would reinforce his belief that he's bad, and that would stick with him. Maybe he stopped and swore that off, but she remained sexually attracted to him—that's a scenario I could see as well. Maybe she's the secret he's running from, the reminder of his miserable childhood.

You can get a lot of information from the way boundaries are transgressed in this family. The way Cissy breaks into Brandon's home, the way they are with their bodies and personal space, the way she walks around his apartment in this translucent off-the-shoulder t-shirt. Their home must have been so unsafe, and they weren't really shown how to be brother and sister or how to be appropriate. All these boundary violations are characteristic of the families of addicts. There's a distortion of reality, of what's mine, what's yours.

One thing I thought was interesting was his relationship with his coworker, Marianne. He does sexualize her—we see it in his fantasy—yet in it, she's nude and looking at him but he's not having sex with her. We're shown might have a glimmer of a feeling for her. They go out on this date and they actually talk, even though he's so unlikeable and awkward in my opinion. And she seems to have her self-esteem intact and challenges his glib remarks, which probably scares the crap out of him. There's a moment where he tries to illustrate the futility of marriage by noting how older couples don't talk wen they go to restaurants, and she asserts that maybe they don't need to talk because they're connected. He doesn't kiss her goodnight at the subway. What I thought was a nice detail is that when he later seduces her and brings her back to his room to have sex, he's going about it the way he would with anyone else. But she makes contact—she stops his pawing at her, takes his face in her hands and looks him in the eyes—and at that point, he can't perform. That makes sense to me. In making contact, in her seeing him as a human being, he can't go into his autopilot humping mode. Closeness isn't sexy to him—closeness is threatening. In his family he learned that the people who are supposed to love you will only hurt you.

A non-addict might have been moved by this woman's embrace, be softened by her attention, and might fall in love. Brandon kicks her out of his bedroom, calls up someone he doesn't care about, screws her in the window to restore his sense of self. Vulnerability overwhelms him, so he reaches out to the easiest anesthesia, feels shameful, and then does it all over again. It's a toxic cycle, and if it doesn't end in some form of recovery, it won't end pretty.

The scene where Brandon has sex at a gay bar no doubt raised a few eyebrows. I think it's important to point out that there are straight men who, in their escalation of their addiction and their need to increase the high of the sex act, will seek out sex with men. And it usually has nothing to do with their sexual orientation or being interested in men per se—it has to do with the intensity, the taboo and the availability. We see Brandon get rejected at a bar and rush to a place he thinks will be a sure thing. And that last ménage a trois he has is so uncomfortable and wrenching. He has this look on his face that's more emotional than anything we've seen in the whole movie and I think McQueen makes it clear that he's not having a good time—he's in despair.

I would hope that at this point Brandon would seek professional help, but he might not. He's created a fairly consequence-free lifestyle for himself: no wife, no kids, no close friends, no one to be accountable to. This is the type of guy who might die from what he does: he could have sex with the wrong person, get beaten to death, hit a suicidal low, catch a horrible sexually transmitted disease, escalate into viewing child pornography—things could get really bad. He needs some way to cope with the feelings from his sister's suicide attempt and dependence on him. The end of the film, when we see him and the married woman on the subway, suggests he may just cope the best way he knows how.

In the media now, there's this whole conversation about is sex addiction just an excuse for bad behavior. Are men just going to start crying sex addiction to cover up for the fact that they're just not faithful to their wives and don't want to control their libidos. Yeah, some people might do that. But that's not what sex addiction is. It's a really complex, deep, often trauma-based pattern of behaviors where sex is used to escape uncomfortable feelings and anesthetize pain. It's good that we have this film because it stimulates dialogue and portrays a lifestyle and set of behaviors that exist. Whatever you call it—sex addiction, sexual dependence, sexual acting-out, problem sex, sexual compulsivity—it's a dire problem that needs therapeutic attention. It wrong to label all excessive or eccentric sexual behaviors sex addiction, and we have to be cautious about pathologizing sex, but let's not throw the baby out with the bathwater.

Caroline Frost, MFT, is a licensed Marriage Family Therapist and specializes in intimacy disorders like sex and love addiction and relationship dysfunction. She sees individuals and couples in private practice in the Beverly Hills/West Hollywood area. She also specializes in treating creative populations. For a free phone consultation, call 323-839-3707, or email carolinefrost@mac.com. For more info, visit www.carolinefrost.com or follow @LoveWellTherapy on Twitter.