close
OPINION: How it took them this long is beyond me.

Fox News Finally Discovers The Rainbow Connection Between 'The Muppets' And Bolsheviks! 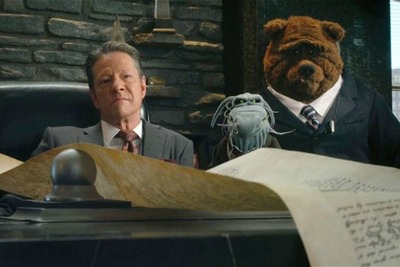 Like most American students, I read about Upton Sinclair's The Jungle* in high school history class. Perhaps because I grew up in Oklahoma and went to a public school in a reactionary small town, we didn't read the book itself, only excerpted examples of what we were taught was a book that led the (Teddy) Roosevelt administration to enact major regulations governing the meat packing industry. I finally read the thing myself and discovered it was actually a bitter account of the squalid lives of American labor in the early 1900s and an appeal to the consciences of the citizenry at large to oppose the exploitation of the working class. Or as conservatives would put it, "commie propaganda".

I was reminded of this thanks to a hilarious segment that aired on Fox Business last week. I don't mean to keep talking about The Muppets, but on December 2, host Eric Bolling seemed particularly offended because the movie's villain is an evil oil baron named Tex Richman. Now you and I, having seen many films and thus being perfectly aware that the evil businessmen is a stock trope that shows up in, well, practically every movie ever, might not be shocked to see one here. But to the sophisticated film critics of Fox news, it prompts the breathless cry of "are liberals trying to brainwash your kids against capitalism?".

The answer shouldn't surprise you, but the clip is worth watching for a full understanding of how ridiculous the discussion gets:

I'm particularly impressed by that weird dig against environmentalism - "this is a Muppet movie, the only thing green up there on that screen should be a frog!". Granted, no one whines about having their views challenged like conservatives, which is why books and music get banned and legitimate protest gets suppressed. But that statement is a perfect illustration of the masterful way conservatives are able to completely tune out obvious political overtones they don't like, eventually turning controversial cultural works into neutered religious icons suitable for uncritical worship but nothing else, so long as those works become sufficiently popular. Call it anti-hipsterism, where, instead of claiming that something popular is completely played out and lame, they're claiming they were down with it all along. Like how conservatives laughably claim that were he alive, Martin Luther King would be a political conservative. Then, years later, when the work or person's actual views become known again, they get to freak out about how liberals are corrupting its legacy. By accurately depicting it.

Honestly, the Muppets, as characters, have since their creation or, at least, since Jim Henson partnered with the Children's Television Workshop to help create Sesame Street, been used to spread a message of acceptance, inclusion, self-improvement and multiculturalism. Shortly after Sesame Street debuted, it was banned by a Mississippi commission that objected to the fact that it depicted people of different races not being oppressed by white people getting along with one another like it wasn't even a thing. But more relevantly, in the 80s, Fraggle Rock, a show dealing with many liberal themes but rooted in a kind of environmentalism, was created because Jim Henson reportedly wanted to make a TV series that could 'save the world'.

So duh, guys, of course the Muppets have a liberal agenda. But is Hollywood is some kind of front for communists, ever seeking to turn people against capitalism? Sure, in the same way that the Medellin cartel totally supported populist political movements, so long as they supported making Pablo Escobar the king of Columbia. The business of show works like any other: give the people what they want. And these days, Americans really seem to like stories about Evil Businessmen and the triumph of the little guy. Gosh, I wonder why that is? I'm guessing it's because stuff like this goes unpunished. Or because of charts like this. Or because the unemployment rate is pushing 9% and the representatives of big business keep telling us it's our fault.

Frankly, having seen The Muppets and also having lived in America my entire life, I think it's safe to say that liberals are being given way too much credit here. It's capitalists who are brainwashing our kids against capitalism. And they're doing a great job of it.

Sure, conservatives should be allowed to hate on Muppets, mainly because Muppets stand for everything conservatives hate. But as propaganda efforts go, The Muppets isn't exactly setting America ablaze. In 13 days it's managed to gross about 60 million dollars. That's a solid haul for a franchise resurrected from the nostalgia ghetto, but not exactly Communist Manifesto territory. Really guys, you're forgetting the true meaning of the war on Christmas. You might better spend your time worrying instead about the terrifying threat posed by the glamorization of sparkle-vampire c-sections.

*Related to this is director P.T. Anderson's There Will Be Blood, a barely-there adaptation of Sinclair's later novel, Oil!. At the risk of revealing myself as some kind of idiot, I don't think it deserves the near universal acclaim it has received. Daniel Day Lewis is, obviously, brilliant as usual, but I couldn't get over the fact that PTA took Upton Sinclair's book and managed to completely excise all but the thinnest political content from it. He ended up making a pretty great depiction of an obsessed man's ultimate destruction, but then ruined it with the silly, bad-age-makeup final act that actually had the son character, who becomes a socialist in the novel, follow in daddy's footsteps to become an oil man in his own right. Ugh.

Tags: The Muppets, There Will Be Blood, Twilight: Breaking Dawn Part 1
Print