'I Melt With You' Co-Star Jeremy Piven: I'm The Antithesis of Ari Gold 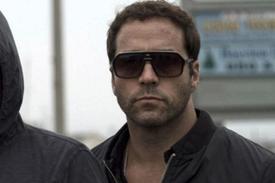 Jeremy Piven started his career as a performer in fun, teen-oriented fluff, and slowly matured into a hugely successful character actor, embedding himself in highly-acclaimed projects like HBO's long-running TV series Entourage even as he popped up in films including Heat and Old School. It's fitting that he now stars in I Melt With You, a wild dramedy about four high school friends on a blowout—and emotionally explosive—weekend of drugs, debauchery and digging into each other's weak spots, as after literally 25 years of acting, both he and his character are looking back on their lives since their teenage years and are coming to terms with the people they've become. Boxoffice sat down with Piven at the recent Los Angeles press day for I Melt With You, where he talked about the crossroads his character faces in the film—and the professional crossroads that he's at himself.

With these guys, where's the line between recreational drug use and having fun and self-destruction? Are they starting their downward spiral now, or did it already begin?

Well, we all represent different things. Richard, Thomas Jane, is the artist and I think it's hitting him very, very hard because he's single and locked up within his creativity and I think he's feeling the weight of his age and expectations of himself and all that kind of stuff. And with me, it's the money and the greed and representing that. And Rob [Lowe] represents the science aspect of it. And Christian [McKay] is the feminine side. So you've got all those different things working as one. We're all together forming somehow one human being. We can't really exist without each other. That's kind of interesting as well in some way. But yeah, at a certain point, you just kind of go, "Wait a minute." You can get caught up with your ambition or a slave to your mind or whatever and you don't really check in with yourself. But this movie's about whether they like it or not, they have to check in with who they are. And I think that's pretty cool for an audience to see—and if it raises the questions we're talking about, that's even better.

How much does a movie like this inspire any sense of self-examination within yourself?

Well, who I am and the way I grew up is so different than the characters I've played of late. Being from an acting family and growing up in a theater family—and being the antithesis of someone like Ari Gold, for instance, who was in it for the money—I think that's been such a fascinating journey for me to inhabit these characters and to play this guy Ron. My father was not like that. I was not like that. I didn't have male figures to play off of. That's why when I hear Bernie Madoff, I can go, "Oh, okay. There you have it." His journey was very similar to Ron's, except he attempted suicide but didn't go through with it. But he couldn't face his family and was doing what Ron was doing to his family. It's so topical, my character's journey—it's crazy.

I think it's easy for people to be distracted by the drug use. What ultimately is this movie about for you?

Well, it's an existential horror flick. I think it's hard for certain men to be honest with who they are, who they are to each other, and to have these conversations. And this is a movie where men have conversations and get the things I've never seen on screen, ever. And that's pretty interesting to me. I'm here in Chicago and living out here, it feels like a town where people live in fear of confrontation. They delegate other people to deal with those confrontations. And I just don't fear it. I have no problem and look forward to having moments of honesty and connecting with people and all that kind of stuff. So seeing this movie, I don't go, "Oh my god, I've been running and hiding from myself." We can all do some more self-examination, and one of the things I need to do is possibly take a little bit of a break. And I think my drug—if I have a drug—is work. And I go from one job to the next and I'm an adrenaline junkie in that way because I love acting. I need to let myself know it's okay to take a break, you know? I believe you should allow yourself to do that, to recharge your battery and be more introspective and all that stuff. But the message you take out of the movie is just the idea that it's gonna spark a lot of questions: who you are and how does that differ from who you said you're going to become? Very few movies are about that stuff and it's at the core of our being.

There's this really powerful scene between you and Thomas Jane where he describes your character Ron way back when they were just teenagers and just cuts you down to size. How helpful was that speech to you in understanding who Ron is?

It's so funny you say that because that particular speech was something I asked Mark Pellington for because I wanted to know more and I wanted the audience to know more about where these guys are from and who they were to each other and all that kind of stuff. Within that speech, you get to see that my character was the commerce and Richard, Thomas Jane, is the art. He was art, I was commerce. And then you get the flip side of it, which is my character would have to bail him out. It all helps. It helps me enormously to figure out all that stuff. Who I am to these guys, who I think I am, who I wanna be, who I wanna be to my family—and that's his tragic downfall because he wants to be the provider and the big man and it meant so much to him and for his friends to see him that way. He also represents greed. My character's an essay on greed, basically.

At the same time, what I think is interesting about that scene is Tom's character is on drugs, so how credible is he? It might be tough as an actor to play high, but also have a real emotional moment.

There is the challenge. That's one of the things when you're reading it, you're like, "How can you pull this off? I don't get it. Oh my god. So wait a minute, for the whole movie, they're taking this ride, they're on drugs, how do you track that?" And it's one of those challenges that's very hard to walk away from as an actor. Some actors I think just kind of ran from it for various reasons and I totally get it. And I'm just stupid enough to jump in and get into the belly of the beast. One of the ways to help that process is what Mark Pellington did: shoot it chronologically so we can kind of track it. So that helped enormously. And just to know what drugs you're on—"Okay, and now the alcohol is washed all out, and that's the predominant force, and that's what this feels like," so you just kind of have to trace it like that. And at the same time, you're communicating with other people. Yes, your perspective may be blurred, but you're still trying to communicate with other people during this process so there's always that point of concentration, as well as my character's complete distraction with his entire life falling around at home.

With Entourage being over, do you feel a sense of relief that you're no longer bound to one thing or is there a sense of panic now that you have to find more work?

Every take or every scene of every episode of every season, I went as hard as I possibly could. And I think that there's a certain satisfaction that I have in knowing that we put it all out there. We left it all out there. I feel really great about that. The rumor is there's a movie being written. Wow, that would be amazing. I welcome it with open arms. You can't get ahead of yourself and all that kind of stuff. But as far as the series, I feel really satisfied and I think it's time to mix it up with some different roles and energy and all that kind of stuff. Every time an actor's done with a movie or a job, you can regress to that old feeling of wondering when the next job is going to come. And I think now it's a matter of really honoring this moment and letting it be okay now to wait for something that really moves you like I Melt With You. The next thing I'm gonna do is something I never thought I would do, playing opposite Miley Cyrus, but it was like, "I get to play an FBI guy that's straight down the middle, and I've never played that character before. Wow, this is totally challenging in playing opposite an 18-year-old girl." To go from this, the belly of the beast, into that—believe me, it keeps it interesting.

Did playing Ari so effectively send your career in a different direction, either because it affected the roles you were offered or it made you make sure to choose parts that are so different?

Yeah, Ari was the first character that I ever played with a real huge sense of power. Also, he was very connected emotionally, an incredibly reactive character which was very, very fun to play. That's why I'm so grateful for things like I Melt With You, to play this character that ultimately is so incredibly crushed and emotionally unavailable and all that fun stuff to play with. But yeah, now it's about exploring all this other stuff and getting into that. I don't think I should concern myself with how that was or how I'm perceived because of it. I understand when someone meets me and then maybe thinks I am that character, which is funny because growing up in a stage family in Chicago and dealing with the Aris of the world, I truly know how different I am from them. So it's funny to me. But I look forward to being misunderstood in my next role as well.

Tags: Jeremy Piven, I Melt With You
Print