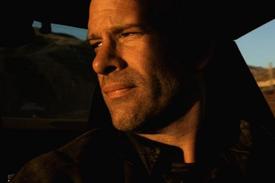 It's refreshing to see an actor take his work a little more seriously than, "Oh, where's my paycheck? Cool—now I'm a Viking!" After almost two decades in Hollywood, Thomas Jane seems to have found a way to apply serious thought to a lot of projects that might not have deserved it. But he's also been in a lot of projects that have. From Boogie Nights to The Thin Red Line to The Mist, Jane's thought and discipline not only makes his roles effective, they make him unique. And in his latest film, I Melt With You, Jane plays a character who faces a moral quandary during a getaway with three of his high school buddies. When tragedy strikes, it turns their self-destructive hedonism into a bittersweet portrait of male friendship, and an examination of how we turn into the people we never thought we would become. To tell Boxoffice how he played his part, Jane draws on Buddhists, Jackson Pollack and blue jeans. We'll let him explain.

Are these guys self-destructing on purpose?

I think it's all various degrees of self-destruction, you know? You want to escape yourself—that's the whole point. Even recreational drugs, the idea is to escape. But you're escaping yourself, you're destroying the self, and that can be beneficial if you're meditating, or it can be really destructive if you're poisoning your body with drugs. And it really comes down to that: what's a poison and what's not? Drugs are poisonous, so they're not the ideal way to escape, but humans have always wanted to escape, since the beginning of humanity. They invented ways to transcend or escape our regular, day-to-day consciousness. And from the American Indian to Indians from India, Buddhists, we're all just trying to escape, but the end goal is to achieve a higher sense of awareness, and to learn something. And where you lose that and it turns into plain old debauchery? Who knows?

Are they aware from the beginning that they're in search of that greater consciousness?

I think Richard's the writer, he's the artist of the group, so yeah, I think he knows on an instinctual level what we're doing. But what we're really doing is searching for a connection. Somebody has a line in the film, "I haven't felt this good in years—maybe it's because I'm numb," and that's what we want. As humans, we're searching for ways to connect with each other, and unfortunately, our society is not built to pave socially-acceptable ways for men to connect on an intimate level if it's not through violence or through debauchery. But in your 20s, you've got all kinds of socially-acceptable things: rock concerts and doing drugs and all kinds of male bonding, sports and things. But in your 40s, what are you left with? You have to resort to the same shit you did in your 20s. Like, if you're in your 40s and you don't have a job, you have to lie about your age. We're a youth culture so everybody wears blue jeans and tennis shoes and t-shirts, the uniform of our 20s. It's like, "That's the uniform of our 40s? Really, it's either that or wear a suit?" And with a suit, you're negating your own originality—you're becoming an ant in the greater whole. So how do you be an individual in your 40s and have a socially-acceptable means of bonding and communication? It's like: we feel isolated.

How do you boil down that existential crisis into a character?

Yeah, you have to rely on the narrative to talk you on that journey, and as an actor, I just wanted it to be as raw as the material would allow, and to explore the insecurities and fears of being an American man in his 40s. You just don't get that opportunity—we're not geared towards that. We're immature. Someone once said human culture is basically in our late adolescence. We're still stealing the keys to dad's car and tearing up the back roads and picking up girls and drinking. It's like we're not quite adults yet, as humanity.

How much could you relate to the unrealized ambitions of this character?

Yeah, I've been lucky and gotten through the show on HBO, Hung, to explore some real deep sort of issues of being a man in America in his 40s in a comedic sort of way. And it's been great, and this film really explores the same questions that Hung brings up, only in a much darker, sort of dramatic fashion. How do I relate to that stuff? Just being human, man. Just being alive, where it's like what Shakespeare calls the slings and arrows—nobody escapes unscathed. Even Steve Jobs had demons and had failures. I think that success is basically relegated by your ability to accept failure, you know, and people who can't accept failure ultimately give up or don't try, because they're not willing to fail. And people who are successful in whatever endeavor, whether it be marriage or your job or personal goals, you have to be willing to fail. In fact, you have to fail—success is failure, but you're just failing forward instead of failing backward. And that is the lesson—you are going to fail—and that is one of the great lessons of life. Ultimately life is a failure, right? We die, we all die, and life is a series of failures, and through those failures is where we find ourselves or we find the richness or the tapestry of life becomes revealed, through our failures. Anybody who's cried at a dog food commercial is recognizing the inherent failings of being human. You listen to a sad song on the radio and if you feel it, it's because you're relating to the failures of the heart.

How much does a film like this inspire you to think about who you were when you were younger?

Well, and form of self-expression is an opportunity to explore yourself and your own road—the past, the present, the future. It's a constant exploration, and artists, we only have ourselves: that's our material. It's your own personal experience through life—that's what you have, and that's all you have, and your ability to tap into the truth of who you are is directly related to your ability to express that truth. You have to feel it before you can express it. It's wild—it's a wild road-so all of these movies afford me an opportunity for self-exploration. That's what it's all about right? This is why we listen to music and go to movies and read books and shit: we're interested in other people's journeys because we can relate it to ourselves. So this movie is an attempt at real art and what art is supposed to do, which is create and hold up a mirror to the experience of that art.

But that's an idea larger than what you can play as an actor.

That's the narrative—you need a narrative to hang it on. Even Jackson Pollock, painting that giant canvas full of f--king splotches, drops, and f--king dribbles, has a narrative. There's a narrative to that painting and that's what makes it engaging. That's what makes it stand out. When you see a Jackson Pollock up on the wall, and taking a housepainter's canvas that he laid on the ground before painting the house and hanging that up on the wall. Well, actually they're both narratives: the one, the housepainter, you see, "Oh, he was painting a house and he dribbled some shit on the canvas while he was painting the house." That's the narrative, maybe not so exciting, but maybe it is-maybe it's f--king genius depending on who's looking at it and what they're getting out of it. That can be art. But Jackson Pollock, when he was painting those paintings, he had a narrative in mind, so you're exploring stuff and you're using raw emotion and your intellect and your presence as a human being, and you're putting it into your work, but you're telling a story. So behind every piece of what we call art, there's a narrative behind it, and that's what we hang the ideas on-we hang the ideas about life on that narrative.

How easy is it to create a rapport with actors where you're supposed to be lifelong friends when you've just met them?

As an actor, you want to use all of the sensory input that you get, so my connection with Rob Lowe as a person, or my connection with Jeremy Piven and Christian McKay as a person helps enhance the relationship I portray on film, just as much as relationships with close friends in my life. So I'm using relationships that I've experienced, and I'm overlaying that on to Rob and Jeremy and Christian, but I'm also using them as a real person. It's a combination, it's a marriage between the real and the imaginary that helps me to create the narrative that I want to create or that I'm going for. So you use it all.

Do you approach all your roles like in Hung or in The Punisher this way, or are some more straightforward?

I think ultimately I do want to see every role as deeply as is possible. The narrative of a movie like The Punisher is not going to afford you to be as philosophical, but really that's not really true: you can be as deep as you want to get with any part, and you can make it mean anything you want to make it, and you can express anything. The words are just rungs on a ladder that you're stepping on, that you're building to get from here to there, and where "there" is is wherever you want put it. It's like, "I want to put my ladder over at this tenement building and I want to climb up to the roof and then I want to go to the moon-and you can do it." You can build your ladder anywhere you want to go, and the narrative affords sort of what you're going to be able to ultimately extract from it as a viewer. You can read as deeply into anything as you want to, and as an artist, this kind of punk-rock, DIY, emotional vomitorium of a film is refreshing. We don't get this opportunity a lot, and that's what attracted me to the role and to the movie: it's a deep, dark film in a world where deep and dark are not really held up as valuable. But that doesn't mean it doesn't exist, and it doesn't mean people individually don't want to extract f--king deep, dark meaning out of their entertainment. [Laughs] There's always room for that kind of s--t, even though it's not popular right now.

Tags: Thomas Jane, I Melt With You
Print