close
OPINION: Despite being a largely excellent movie, the treatment of female characters in the latest Muppets outing has some unfortunate undertones.

Our Piggies, Ourselves: Are Gender Roles In 'The Muppets' Retrograde? 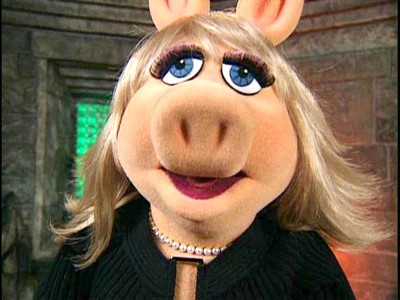 I absolutely loved The Muppets - I've seen it twice now, and the soundtrack is basically my current iPod playlist. In nearly every way it matters, it absolutely nails the essential quality that made the original incarnation of the classic characters so wonderful, and it serves as a beautiful introduction to a new audience. Despite the fact that the new Muppet voices are a little hard to get used to, even 20 years post-Jim Henson's death, the voice actors genuinely inhabit their Muppets and provide them with the kind of life they had during the original Muppets 'trilogy' from the 80s.

But that excellent capturing of the essence of Muppetdom comes with some baggage. Not fatally so, but I couldn't help feeling some nagging discomfort with the film's treatment of women the second time I saw it. See, the two (arguably) main characters, Jason Segel's Gary  and his 'brother', the newest Muppet Walt, have a distinct journey of self-discovery. They both learn to be comfortable with who they really are (there's even a song about it!). It isn't the deepest lesson on earth, but then, simplicity doesn't = stupidity and the result is genuinely touching and deliciously gleeful. But the journey undertaken by the two lead female characters, on the other hand, is somewhat less so.

Amy Adams comes out best, though her character Mary's arc is still somewhat problematic. Mary is established from her introduction as a brilliant, polymathic schoolteacher, so beloved by her students that they'd rather skip spring break than miss her class. Seeing her casually teaching the class how to fix a car is a wonderful touch. However, as with far too many modern films with mostly male casts and only one or two token women, once Mary is established as the best teacher ever, her role changes to 'character development solely through her relationship with boyfriend'.

That's far too common a theme in modern times (see: most of the Judd Apatow canon). Even though Mary is as enthusiastic about bringing the Muppets back to television as Gary and Walt are, she's still largely relegated to the role of long-suffering girlfriend. Unlike Gary and Walt, who become more fully realized people, she is developed, essentially, by how Gary ultimately stops neglecting her and asking her to subjugate her own desires to pursue his dreams.

Still, it's less discomforting than how Miss Piggy is handled. Of course, the problem here is partly written into Piggy's DNA. The joke on the original Muppet Show, continued into the films, always was that Miss Piggy was obsessed with Kermit, and that she annoyed him endlessly while he was just trying to put on a show. The conclusion of the joke is that she ultimately tricks Kermit into marrying her in The Muppets Take Manhattan. As I previously mentioned, I love that movie, I love the scene in question and I specifically love the song associated with it. But that's partly 11-year old Ross at work. The problem, of course, is that time and society marches on, and in the 35 years since the Muppet Show first aired, society has changed, a lot. Oh, women still earn less than men on average, and we're still way too comfortable defending rapists, but overall, we're better for having been changed by feminism. Those changes make watching the scene in "...Manhattan" through my adult eyes much more difficult. Which is why it was somewhat disappointing for a film like The Muppets, otherwise so wonderful, to rely on some rather... old fashioned comedic tropes involving the irrationality of women when it comes to Piggy.

There's a scene in the second act, when Kermit and the gang have travelled (by map!) to Paris, France in order to convince Miss Piggy to rejoin the troupe. Piggy and Kermit have broken up, and there's still a lot of tension between them, tension they take to the local streets to discuss. During that conversation, when Piggy berates Kermit for, basically, not pulling his own weight in the relationship, he says, (Paraphrasing) "When you act like this, you force me to do things that hurt you". I know that it wasn't intentional, but even so, the line is an almost word for word rendition of the kind of thing an abusive husband would say after striking his spouse, and it was hard to hear without wincing.

The troublesome characterizations of Piggy and Mary is played out fully in their duet, the super catchy, disco infused "Me Party" in which they defiantly vow to enjoy themselves despite being basically given second priority by their men in favor of the Muppets reunion. I love the song of course, but it would have been nice if their moment in the sun could have had a bit more active-in-the-actual-plot to it.

Now I want to be clear that I don't think the script written by Jason Segel and Nicholas Potter intended the ultimate lesson to be "guys need to be who they are; girls need to get the guy'. One of the biggest problems being a man in a male-dominated world is that you don't always notice your privilege*. There's also the very large, sometimes subtle, sometimes not, culture of sexism that still dominates Hollywood to this day. The tropes associated with that kind of baggage are hard to avoid. And it's worth noting that they tried very hard to make an ultimately joyful good time that very much keeps with the inclusive message spread via Muppets from their inception. I just hope that, should they be lucky enough to make a sequel, they'll think more critically about how they handle their female characters. The women (and girls) in their audience deserve no less.

*Don't worry, men. You still control business and politics. So don't panic about those feisty feminists!