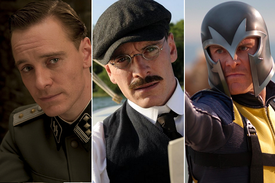 In his very short Hollywood career—barely three years—Michael Fassbender has already worked with some of the most interesting directors on both sides of the Atlantic, including David Cronenberg, Quentin Tarantino, Cary Fukunaga, Andrea Arnold, Matthew Vaughn and artist-turned-filmmaker Steve McQueen. The German-born, Irish-raised Fassbender stars in four films this year, among them the just-released A Dangerous Method and Shame, which made headlines last month for garnering the dreaded NC-17 rating, largely thanks to Fassbender's visible—make that unmissable—penis. Yet even though Fassbender bares it all in Shame, women won't be swooning over Brandon, the sex-obsessed New Yorker he plays with an icy demeanor. They'll be throwing rocks at the screen instead.

Fassbender's critical adulation has brought female and gay attention, which is no surprise to anyone who has eyes and uses them to see, since Fassbender is the movies' answer to Jon Hamm. Like his flannel-suited television counterpart, Fassbender was never a pretty young thing. Instead, he sprang forth fully formed from a casting director's head at the relatively ripe age of 31, effortlessly embodying the classic handsomeness and hardy masculinity of a bygone era. We rank Fassbender's swooniest roles, not by skill—he's good in all of them—but by sex appeal from be-still-my-roaring-heart to pretty darn hot:

Lt. Archie Hicox, a film critic-turned-dashing spy for the British Army in the Nazi-shoot'em-up Inglourious Basterds
Looks: Even in a German uniform, his nobleness shines through. The genteel accent helps.
Personality: Impossibly posh, he is recruited for Operation Kino for being cultured and bilingual.
Ruggedness: Top marks for staying calm enough to smoke a fag with one hand and drink scotch with the other while having a pistol cocked at his bollocks.
X Factor: He's a total Mary Sue—a character almost inhumanly perfect—so knowing Tarantino, he probably also has a 12-inch willie that shoots bullets.
But is he an asshole?: No. But he is dead.
Overall Score: 10

Carl Jung, the hugely influential if sometimes kooky psychiatrist in the sexy history lesson A Dangerous Method
Looks: Is he doing a Teddy Roosevelt impersonation with that pince-nez and cop-stache combo?
Personality: He starts out as a persnickety prig, but sleeping with his patients really loosens him up.
Ruggedness: He enjoys his rich-men sports, e.g., sailing and adultery.
X Factor: Half the Dangerous audience is buying tickets to see high-brow spanking. Plus, he literally cures a woman with his penis.
But is he an asshole?: His intellectual passion, keen open-mindedness, and wide-ranging curiosity more than compensate for his breaches of professional ethics. Plus, they're really hot breeches, er, breaches.
Overall Score: 8

Mr. Rochester, the reclusive gentleman who falls in love with his outspoken governess in Jane Eyre
Looks: Never has he appeared more beguiling than in his Victorian whiskers and dark, curly locks.
Personality: He errantly considers absolute honesty a virtue (except for that one big secret). Here's a pro-tip: after primary school, don't call girls you like "ugly."
Ruggedness: A member of the landed gentry must have expertise in hunting, horseback-riding, and surviving multiple arson attempts.
X Factor: Lord knows ladies love a quiet, brooding man with a troubled past—especially if he's rich.
But is he an asshole?: Kind of. He may have done his first wife a favor by locking her in the attic instead of committing her to an asylum—or heaven forbid, divorcing her—but attempted bigamy is indefensible.
Overall Score: 7

Connor, a mostly good guy who drunkenly seduces his chav girlfriend's troubled 15-year-old daughter in the British indie Fish Tank
Looks: Oi, go shave that wispy pornstache off yous bleedin' face right now, ya berk.
Personality: He's charming and friendly, but also a git who rodgers underage teenagers.
Ruggedness: He knows how to catch a fish with his bare hands.
X Factor: Damn, if that gentle Irish brogue doesn't heat up the girls right quick.
But is he an asshole?: Hard to say. He's a good dad to his kids, but needs to be more careful where he spreads his bad touch around.
Overall Score: 6

Bobby Sands, the North Irish political prisoner who starved to death in jail protesting the British occupation in the artsy, impressionistic Hunger
Looks: Sure, he's a wee bit thin, but combined with the ratty t-shirts, cigarettes, and stubble, he's got a great I'm-in-a-band look. Plus, the bleeding sores are great for authenticity.
Personality: Like all martyrs, he's stubborn and idealistic, but you gotta admire the man's conviction and self-discipline.
Ruggedness: Surviving prison might be the manliest thing ever. Also the smelliest thing ever.
X Factor: Uh, some women are into guys in prison?
But is he an asshole? No, but he's probably not looking to date right now, either.
Overall Score: 5

Eric Lehnsherr/Magneto, the embittered antihero-gone-bad in the superhero prequel X-Men: First Class
Looks: Nobody wears Brylcreem better. Too bad he starts wearing that fugly helmet at the end.
Personality: He's sweet to mutant girls with body dysmorphia, but needs to work through his "kill all humans" thing.
Ruggedness: He survived the Holocaust. Nuff said.
X Factor: Lord knows ladies love a quiet, brooding man with a troubled past, but this one's secretly a mama's boy.
But is he an asshole?: Yeah, but some guys you keep around out of spiteful passion.
Overall Score: 3