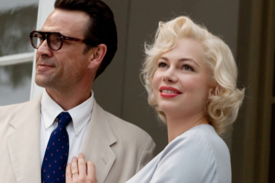 My Week with Marilyn picks pixie-hipster actress Michelle Williams to play the Hollywood icon as a devastatingly beautiful, irresistibly charming, unsalvageable hot mess. Viewed from the perspective of a smitten production assistant on a British film crew, the 30-year-old Monroe of My Week with Marilyn is in slow but irreversible decline: addicted to pills, prone to wild mood swings, and incapable of getting along with her director, Sir Lawrence Olivier (Kenneth Branagh), or her third husband, Arthur Miller (Dougray Scott). Given Monroe's perennial popularity—there are reportedly more books about her than about the Civil War—and totally messed-up life, it's curious that there aren't more movies about the tragic star. Here are six other Marilyn Monroe movies we'd like to see, complete with our choice of star and sample dialogue taken from actual Monroe quotes. (To any Hollywood producers reading this—let's do lunch!)

Marilyn and Truman
This buddy dramedy focuses on the gossip-and martini-fueled friendship between Marilyn Monroe (Scarlett Johansson, doing comedy for once) and writer Truman Capote (Thora Birch in heavy prosthetics). As misfits seeking fame and fortune, the shy but foulmouthed Marilyn and the catty social butterfly Truman instantly recognize each other as kindred souls. The two carouse around town, dancing, shopping (cue makeover montage!), and wholeheartedly failing to help each other deal with their men and alcohol issues. They attempt to get Marilyn cast as the glamorous rube Holly Golightly, a character based on Marilyn herself, in the film adaptation of Truman's novella Breakfast at Tiffany's. But infuriatingly, the part goes to that actress with the weird accent and the super-butch haircut, Audrey Hepburn. The film ends with a stage production of "A Beautiful Child," Truman's lyrical essay about his sweet, deceased friend.
Sample Marilyn dialogue: "Speaking of Oscars, I would win overwhelmingly if the Academy gave an Oscar for faking orgasms. I have done some of my best acting convincing my partners I was in the throes of ecstasy."

The Overdose.
This erotic thriller centers on the tragic love triangle between President John F. Kennedy (Greg Kinnear), Attorney General Bobby Kennedy (Matt Damon), and Marilyn Monroe (Lindsay Lohan, in part because we're throwing her a bone and also because she's prematurely for the role). The driven, power-hungry Kennedy brothers wage war against the three greatest threats to America—Nixon, Communism and organized crime—and compete sexually with each other for Marilyn's, uh, heart. Indulging in fantasies of becoming First Lady, Marilyn falls for John F., then seduces Bobby as revenge when the older brother stops returning her calls. The Kennedy's brittle Bostonian accents and manners are well-suited for caddishness, but the real villains are the Mafia, who bump Marilyn off as a coded message to the infatuated AG to stop getting in the way of mob business.
Sample Marilyn dialogue: "Say goodbye to the president" as her last words.

Avalon.
Set in an idyllic small town on Santa Catalina Island, just 20 miles into the Pacific Ocean and viewable from Los Angeles, this inspirational, coming-of-age film shows a young Norma Jeane (Jennifer Lawrence) as an unhappy child bride and an ambitious tough cookie seeking to escape her Marine first husband, James (Fisher Stevens, who spent a lot of time at the gym for the role). We learn through flashbacks that Norma Jeane was given up as a toddler by her mentally ill mother, shuffled between foster families and convinced to marry James at the age of 16 by a foster mother whose husband repeatedly sexually abused the young Norma Jeane. James was often at sea, so Norma Jeane—detesting the role of the little woman in the kitchen that her older husband wanted from her—worked in an aircraft factory during World War Two until she was discovered by a photographer. The town of Avalon is so close, but yet so far from the glamour of Hollywood, and Marilyn spends all her savings from her factory job to get to her modeling gigs in Los Angeles by ferry. On the day her hard-won divorce is finalized, she moves to Los Angeles and enrolls in classes at the Actors Lab and UCLA as "Marilyn Monroe."
Sample Marilyn dialogue: "I knew I belonged to the public and to the world, not because I was talented or even beautiful, but because I never had belonged to anything or anyone else."

The Method.
Method acting comes into existence in the late 1940s, and Marilyn Monroe (Rachel McAdams in an Oscar-baiting role) is one of the first Hollywood actors to adopt this new approach to stagecraft, which required actors to relive their own past experiences to achieve emotional realism in their performances. Such an approach might be harmless for a grounded actor like Paul Newman, but could very well psychologically ruin an actor with a history of childhood abuse. Method acting undoubtedly helps Marilyn become a better actress, but it also makes her an emotional wreck. This film about filmmaking argues that Marilyn was an artist who died for her art, since the lack of an emotional shield from her painful past and the inept psychoanalysis she underwent exacerbated her alcoholism, barbiturate addiction, and genetic predisposition to mental illness. At the height of her fame and professional success, Marilyn was institutionalized at a psychiatric hospital for weeks, but recovered enough to make a few more films and public appearances, including singing "Happy Birthday" in the most sexy/campy way possible.
Sample Marilyn dialogue: "My problem is that I drive myself. I'm trying to become an artist, and to be true, and sometimes I feel I'm on the verge of craziness, I'm just trying to get the truest part of myself out, and it's very hard. There are times when I think, 'All I have to be is true'. But sometimes it doesn't come out so easily. I always have this secret feeling that I'm really a fake or something, a phony."

The Bombshells.
Marilyn Monroe (Kristen Bell) and Jane Russell (a brunette Amy Adams) meet on the set of the musical Gentlemen Prefer Blondes and become fast friends in this behind-the-camera film. Jane, already a big star, takes her emotionally unpredictable co-star under her wing, coaxing her to come to set when the inexperienced actress' stage fright keeps her in her dressing room. As actresses known and belittled for their va-va-va-voom, Marilyn and Jane bond by making fun of skeezy studio heads, Gentlemen's silly costumes, and their own "bombshell" images. The two share techniques on vamping and hip-swishing and reveal their forlorn childhoods to each other. Their friendship lasts long after Gentlemen wraps, even with the two frequently vying for the same roles and with Marilyn's star on the rise and Jane's on the wane. The biggest test of their friendship comes in the form of Marilyn's conversion to Judaism (so she could marry Arthur Miller), when the born-again Jane, suspicious of Miller's willingness to be faithful to his bride, well-intentionedly tries to convert her friend back.
Sample Marilyn dialogue: "I can be smart when it's important, but most men don't like it."

The Life and Opinions of Maf the Dog, and of His Friend Marilyn Monroe.
This film adaptation of the novel tells the story of the Scottish-born Mafia "Maf" Honey, the Maltese lapdog Marilyn Monroe (Malin Akerman) receives from an aging Frank Sinatra (Steve Buscemi, because Sinatra was a misogynistic ass) upon her divorce from Arthur Miller. Voiced by Sean Connery, Maf is Marilyn's only true companion during the last two years of her life. And so he protects his doting owner from the mean-spirited people around her and sets out to find the fellow dog whose all-night barking keeps Marilyn up at nights. (Expect a lot of dog movie cliches.) Despite his loyalty and devotion, he finds Marilyn deeply strange. For example, he can't figure out why in the world she walks around the house saying the same words over and over again in slightly different ways or why she always sounds so out of breath.
Sample Marilyn dialogue: "Dogs never bite me. Just humans."