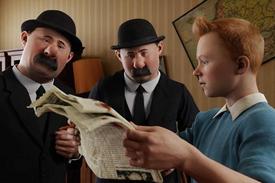 This week, Nick Frost stars in his latest collaboration with actor Simon Pegg and Edgar Wright, the actor and filmmaker (respectively) with whom he worked on Spaced, Shaun of the Dead and Hot Fuzz. Rather than some third quirkily brilliant tribute to the films the threesome grew up on, however, they gathered together again to bring to life a character whom the whole world has celebrated for decades—Tintin—under the directorial guidance of no less than Steven Spielberg. Boxoffice sat down with Frost at the recent New York press day for The Adventures of Tintin, where the gifted English comedian discussed the challenges of separating himself from his costar Simon Pegg (both on set and in his career), figuring out a way to bring to life such a beloved character, and developing a career that isn't predicated on playing too many of the same kinds of characters.

How well-defined were the two guys you and Simon were playing, and what if anything did the two of you do to distinguish them from one another?

I think it was probably important that you don't distinguish them from one another. I think the only physical difference is the shape of their moustache, which is pretty funny. But actually they're not related, they're not brothers, they're just men who look exactly the same. And I wondered, do they live together? I suppose we'll get to look at all of this for the second one, but they are characters set down by Herge in the books that he's written, and the TV, the cartoons, there is a history there, so for me and Simon, I guess it's fairly easy because it's there in front of us. They're bumbling, kind of posh idiots. But as an actor and someone who likes to explore a character, and I'm speaking for Simon too, you have to bring some of yourself to it; otherwise, what's the point? You could just voice the thing from a studio at home, you know? But I think Steven and Peter [Jackson, producer] really liked the squabbling that we did, and we improvised a lot of that on set, and Steven liked that and he said ‘let's go with it.' And so I think we brought a little more squabbling and a little more of they're always trying to fight each other to see who's best, essentially.

How much were you influenced by the source material, the script or even the performance-capture process in your portrayal of Thomson?

It's probably how it was written in the script, and we had pictures all around the studio of panels of the comic book and all of the characters and stuff like that, so from the minute you walk on set, you're surrounded by Herge and his legacy and the history of it. And I think because Steven and Kathy and Peter were so committed to respecting Herge and his family and the body of work that he had, that rubs off on you too. So I'd hate to think there is a cell of people in Belgium who want to kill me and Simon because we did a terrible job as the Thomson twins; we want to try and make them believable characters in their own right as well. Now we kind of have that technology where we can bring these characters off the page and into glorious 3D, but it's fun; I think we did probably three weeks of Thomson twin training, and we were kind of in a little, very steamy dance studio in Venice. Two coaches from Cirque Du Soleil were there, and we probably spent I guess two or three weeks with these polyester blazers on and top hats and canes, just walking around so Simon and I could get in tune with their physicality.

How much does knowing you're playing a character in multiple movies give you a larger journey to think about? Are you considering the fact that later on this buffoonish character might get one percent smarter?

I don't think they'll ever get smarter. I think they could get luckier or braver, potentially, but I guess that is up to who writes the second film. I think in terms of character, what we did for the Thomson twins in the first one I guess would be the anchor for what we do in everything else in terms of ‘this is them.' I don't think they're complex enough as people; I think they're very simple people - I think they eat the same dinner on the same day, they like to read the paper together, and I don't imagine there's much more to them, and I think that's fine. I think that's fine to pick these rich lives of these interesting people, which is fine, but this is how the Thomson twins are, and I think it would jar if suddenly one of them became a genius, or a prize fighter. It would be quite odd.

How does it feel to be taken out of the familiar cradle of the collaboration you share with Simon and Edgar Wright, who wrote Tintin, and put that into a new context? How similar or different does it feel?

It kind of feels the same. I think it was quite nice that we had that secret British support group where we would finish work and go back to the hotel and like talk about our day—we'd debrief, which was good. But we're not a four or three-headed beast; I like working with Edgar and Simon, but I probably like working separately, and just as much. It's just a complete, different vibe. Acting isn't a team sport, you know? I'm happy to do whatever, and it just so happens that I really like working with Edgar and Simon, and I think the less and less we do of that, the more and more, Simon says it quite often, that the only reason we make films is because it means we can hang out with eight months at a time. It's pretty cool.

You don't say no to Spielberg's call when he reaches out to cast you, of course, but did you have any trepidations about playing another buffoonish character having done many of them so successfully in the past?

No, I think I've done enough that it doesn't bother me at all whether they think about that at all. If he wanted me to play a village idiot, I would do it. I just wanted to be involved really. I think there is a big difference between Ed and Danny Butterman and Clive Golling; I think they are all kind of different characters and stuff. So no, I don't really worry about getting typecast; I think I'm alright, I think I'm cool. But now with my short hair, perhaps I'll get cast as some type of lunatic villain—and I'd like that very much. Isn't there room for a Star Trek villain? Didn't someone pull out? There you go. I think I'm probably too heavy for Khan, but maybe a James Bond villain. I wanted to play a James Bond villain, and I think I tweeted that my James Bond villain would be I think I would just have Speedos on, and I'd have like a baboon on a chain, and that would be my Bond villain. With like a big facial slash as well (laughs).