'The Artist' Director Michel Hazanavicius On Why Talkies Arrived Too Soon 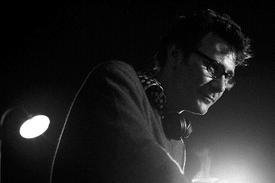 Debonaire in his denim and blazer, French director Michel Hazanavicius' newest film, The Artist, had enormous success at festivals and was picked up by Harvey Weinstein just after its Cannes screening. The Weinstein Company was quick to give the film an Award-Season release date, and it's easy to see why. A black and white silent film made by a Frenchman but filmed in Los Angeles with an American supporting cast that includes John Goodman and James Cromwell, this instantly importable commodity is a tidy period piece about the misfortune of silent film star Georges Valentin (the dashing Jean Dujardin) as he faces the demands of talking pictures. Though it's reverent and disarmingly sweet, The Artist isn't just a kitschy throwback—it makes people cry. But will it make them vote yes for Best Picture? Hazanavicius talks about what The Artist borrowed from Citizen Kane, what it didn't borrow from Singin' in the Rain, and why the talkies arrived too soon.

Your last two films, the comic spy series OSS 117, were send-ups of the 1960s spy thrillers. The Artist treats its subject more seriously, but it's also about a bygone era. What value does nostalgia have to you?

I won't say it's a coincidence but I will say I won't deal with it my whole life. The OSS films were made about the '50s and '60s but they were very ironic. Not cynical but ironic. There was a nostalgia about the cinema of the period, but a mocking of the period. For The Artist, there is no irony at all. I totally respected the cinema of that period and the way people thought of the cinema. It's a true romance with melodrama and for me it's very different. For OSS, I did a reconstitution of the period hair, costumes, etc., but shot it in the modern way. For The Artist, I also did a reconstitution of the way '20s films were shot-the way they lit and covered the actors and the editing.

And the acting, as well.

The acting is referent, so you have to find a balance between the references and the modernity. It's not a fake '20s movie—it's a modern movie, but very referent of the '20s.

Reference implies it's a reinterpretation—that it's not trying to actually be the real thing.

I know the audience is watching a silent movie—they know they're watching a silent movie—this becomes a game. In the '20s, movies were movies. They had no option. And now it's a choice and everyone knows I made the choice to make a silent movie. So there's a joke in that, and silence is a theme and sometimes it's treated comically. It's not an academic thing. I'm not a historian of the cinema. I wanted to tell a story in this format and tried to make it entertaining.

Just like this transition from silent to sound, things might be lost or changed when we move from film to digital cinema.

Yes, but I'm not just thinking of cinema with the transition. I'm not just interested with the 3D and digital, but now everybody has to face some kind of transition period. Back in the days, you spent your entire life with the same woman, and same job, in the same field. It's not like that anymore. You have to change your job many times. Even the couple is much more fragile than it was before. Now, I think the world changes very quickly. You're born in a world and you die in a very, very different one. We all have to face that kind of transition period. I tried to make this film in that spirit because this is the story of a human being in a transition period.

Typically, people who love silent film are fond of this idea of pure or universal cinema—the notion of cinema as a language that transcends the need for translation.

Yeah, sure. I think it's part of the process. It's not just about the language or the device of a silent movie, but as an audience you're very close to the story and the characters. Dialogue is cerebral. It's information and it goes from brain to brain. When there's no dialogue, it's much more sensual. It's more like painting or music. You don't understand it—you feel it. It's a very different experience. I'm not saying anything about 3D, but with silent film you make your own voices and dialogue, you make your own sound design, you make your own experience, and that makes the story close to you because you're part of the process. Also it's very moving that everyone in the world can understand the movie in the same way. Silent movies were a utopia of universal language, like painting and music. Directors in the '30s regretted the arrival of the talkies. I think talkies are better, but I also think if talkies arrived 10 years later we would have...well, I think they maybe arrived too soon.

The director F.W. Murnau wrote about that—didn't he have a series of letters to a friend about the timing of sound film hurting the maturing language of cinema?

Yeah. And he died so young.

For international audiences, this is poised to travel really well.

Yes, but it's not as if I made this with that plan, I had really sincere intentions with this film. Plus it's not really a huge market idea. If you say, "I have a wonderful marketing idea to make a silent, black and white movie," they'll laugh. And they're right. Things have changed because the movie went to Cannes and we won an award and we've been to many festivals and Harvey Weinstein bought the movie and it went very well with our opening in France. It's gone very well, but in the beginning the only thing I could do for the financials was say, "Well we may not make a huge hit because it's black and white and silent, but if we do it well and make it good for festivals it could be a prestige movie."

Did you write this for your stars?

The movie was written for Jean Dujardin and Bérénice Bejo [who plays Peppy Miller, George's love interest]. I really wanted them and when I met the producer—oh, I was very lucky to meet that producer because he was crazy enough to use his own money and support me in that adventure—he really wanted to do a movie with me and I said, "But I want to make a black and white silent." He said "Okay." I said I wanted those actors. He said "Okay." I said I wanted Guillaume Schiffman as cinematographer. He said "Okay." I want Ludovic Bource as a composer. And he said okay to everything.

How did you describe George's old-fashioned acting style to Dujardin?

Jean was very concerned about pantomiming, overacting or being ridiculous. It's not because of the silent format or the talking format. The problem is you can't compare a film from the '20s and today—the codes of acting are just different. I didn't want him to imitate the codes of the '20s. For the movies inside the movie, we can play, do mimics and faces, but for the real story of the film you don't have to do anything, you just have to embody the character as you do usually. You speak if you want to speak. The fact we can't hear you doesn't change what you do. You come with your face, charm, smile, body and act as you know how to do. I take care of the story. I shot the film in 22 frames per second which gives the film a look like the '20s and that gives the actors a look so they don't have to think as much about acting like the '20s films.

The movie is about what turns an actor into a star, and that "it" factor in this film is charm.

And the two actors have such different styles of charm. They both ham plenty, but what they present is always charm and confidence.

I wrote for them directly. Some people call this an homage to silent and I think it's broader than that. It's an homage to classics in general. In a classic, there's a guy and a girl and you know they're going to end up together and the hard thing is how they end up together. It's the same here. When she arrives, you know the second you see her they'll be together and she will become a star, but the problem is how. I guess, when you see her, there's no doubt she's a star: she's pretty and charming and has this good energy. For him, you believe in his status as a star because of his charm and smile. Both of them are bright and sunny people.

What direct homages did you make?

Well, the point wasn't to make an homage for its own purpose. I love Citizen Kane but referring to that wasn't the point. I studied a lot of films, silents and classics, and I did make references, but I didn't want to show off what I know because it takes from my story. I wanted to show how one couple's relationship was failing and I had to do it quickly so there's a scene in Citizen Kane-

Exactly. And it's the same.

It's conceptually the same but you altered its form—you didn't copy.

Well, I did it my way but it's basically the same idea. I have no problem with that. It's not even a tribute. I think it gives to this movie the feeling of a classic.

I was expecting you to bring up something closer to Singin' in the Rain or any of the Star is Born films.

And they're in there—though I think this film is closer to Sunset Boulevard than Singin' in the Rain, in my opinion. Maybe I'm wrong.

Heh—but well, now the movie belongs to the people who watch it. Singin' in the Rain is a wonderful movie, but it's in color, it's musical, it's comedy—I don't think it even evokes the same things. The only relationship is the background. It's like two movies talking about the Vietnam War. The Artist is very different, though I'm happy to be a cousin of Singin' in the Rain.

Definitely the sequence in the dailies room where you hear Missi Pyle speak. We see people instruct George quite a lot—the producers ask him to speak, his wife tells him about her dislike for him, everyone seems to come up against this wall that is George—but we still like him.

It's the charm of the actor. It's Jean. You have empathy for him because he's the protagonist. But also because he has charm and you feel sorry for him because he doesn't see some people want to help him. And you know the talkies are going to win, so you want him to make a good decision. We were talking about references: the light of the daily room sequence is very '50s, not '20s at all. It was strong backlight and strong shadows and I asked the cinematographer to watch the screening room scenes of Citizen Kane. I wanted this scene not to be referent. When George laughs, he faces the producers so he's in the light, and when he says "No," he goes to the door and into the shadows. This was a way to tell the story.

To show he's in the '20s while his peers move forward.

And to watch him enter darkness.